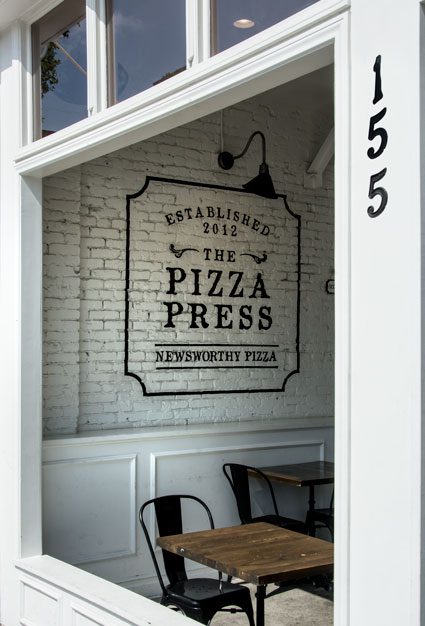 Pizza Today on the Road: The Pizza Press, Anaheim, CA

Pizza Today on the Road: The Pizza Press, Anaheim, CA

In a saturated market, coming up with any new concept can be difficult. When your company chooses a popular industry segment –– pizza –– in a densely populated area, the task becomes even more challenging. We caught The Pizza Press on the cusp of an impressive growth plan. Founder Dara Maleki and his team have created a concept that is not only unique but also thriving, with $6 million in sales and 40 franchise units sold.

The Pizza Press’ original location opened in an old sandwich shop just across from Anaheim, California’s Disneyland in 2012. “We were trying to get away from the tired feel of the franchise realm,” says Maleki. “Every company these days is a logo, a color scheme and a slogan. We really wanted to change that up by focusing on three things, and that’s the quality of service, the value of the product and the environment. I think that’s where a lot of people fall short. It’s always like they’re copycatting some other large chain and taking a spin off of it.”

On the forefront of the create-your-own pizza movement, they found a clever concept while looking at their dough press, an integral part of the fast-casual pizza movement. “On a play of words, we made it into this newsie throwback theme that really just enchants so many people,” Maleki says. “You know, when you think about it, that was really the way information was really delivered. It was delivered by people –– the earliest way of blogging or Twitter. These young kids, outside selling the news by the minute, and we’re selling pizzas by the minute. It really works out.”

Once the concept was finalized, creating the menu became easy. Pizzas like The Times, The Herald, The Gazette and The Tribute all correspond with the restaurants’ décor of old press mechanics and black and white photos. The company’s build-your-own concept allows diners to move down a make line, see their pizzas being built and choose toppings. Pizza accounts for 75 to 80 percent of food sales.

While some diners prefer their comfort toppings, The Pizza Press offers its own creative signature pizzas to encourage customers to get a little creative. The Chronicle features an EVOO base, mozzarella, imported artichoke hearts, grape tomatoes, red onion, crimini mushrooms, chèvre, roasted red bell peppers and a basil and pesto finish. The Herald has a white sauce base and is topped with mozzarella, grilled chicken breast, ricotta, grape tomatoes, red onion, crimini mushrooms and fresh basil.

LTOs are offered to encourage a little culinary adventure, such as a summer pizza with pulled pork, mozzarella, barbecue sauce and a sweet coleslaw finish.

Dough is made daily, cookies are baked fresh and vegetables are cut in-house. Finding skilled workers in a competitive market is tough –– the company currently employs about 80 people –– and utilizing foodservice technology such as quick-baking conveyor ovens and mechanical slicers is critical at the franchise level. It also creates continuity, promotes food safety and reduces waste. “We get high-quality ingredients,” Maleki says, including sausage and pepperoni that are custom made for The Pizza Press. “You buy with your eyes. If it doesn’t look enticing, people aren’t going to eat it.”

Americans tend to be topping crazy when it comes to creating their own pizzas, and The Pizza Press has responded by utilizing portion control. “Why limit it? Let’s get people to think and really have this culinary feel about things,” Maleki says.

Craft beer plays an important role in the company’s sales, comprising 10 to 15 percent depending on location. “There’s two things about pizza: people who love pizza like beer, and the people who love beer like pizza,” Maleki says. “It just merges so well together. Beer and wine –– it’s just non-aggressive. … Why is it so faux pas to grab a beer? We’ve got people here at three o’clock enjoying a beer with their pizza, and it’s one beer. We’ve completely changed as a culture. It’s not a pitchers’ game anymore. We’re not pouring pitchers of beer. We’re a society of quality now. I’ll have a beer, maybe two and really enjoy the flavor of something unique. … It’s all craft beer. We try to get as unique (offerings) as we can. We have our own brewery manager and his sole job is to build relationships with local and mainstay craft breweries.”

Wine is also available on tap, and Maleki says they’re able to offer it as little as $4 or $5 per glass because there’s no spoilage. “We’re able to drive a great product at a fair price,” he adds.

The company’s second store opened in March 2015 in nearby Orange, California. Maleki credits Starbucks as the company’s inspiration, having made coffeehouses an all-inclusive atmosphere after which he wanted to model The Pizza Press. “The key about what we’ve created here is a comfortable environment that all age groups can come into,” Maleki says. “We don’t just want the hipsters, we’re not just looking for the 25 to 35 (age demographics) … It’s a family gathering.”

Since last year, two more units opened for a total of four, and six are currently under construction. Franchising has begun with 40 stores already sold and several multi-unit deals in the works. “We’ll probably push through a hundred units by the end of the year,” Maleki says. “When it comes to risk and building, what’s the worst that can happen? You’re going to end up right back in the same place you started. You can’t be afraid to step a foot forward.”

Initial expansion is set for Southern California and the Southwest. “Money really hasn’t been a motivator for me driving forward,” Maleki says. “We like to call ourselves an anti-franchise. The core, the processes, the books, the manuals –– all that has the structures of a franchise … but when it came to the decision, at least when I’m in a franchise I may lose a little bit of control, but that doesn’t mean I can’t sell the culture, too. So many people build a franchise but they forget to build a culture at the same time they’re building the financials. … No one is going to appreciate a half-dressed concept.”

Building growth from within is important at The Pizza Press, and “we look to have 10- to 15-percent hold during our whole entire growth,” Maleki stresses. “We always want to keep our skin in the game and I think that gives us the opportunity to understand where the business is evolving because we have an equity interest. It’s not just one unit. … We’re ramping up our corporate offices, getting in the right components –– those are all the important things in our growth,” Maleki says. “We really wanted to make sure that when we’re building this (concept) out, we look at our franchisees. We’ve not taken a dime from a venture capitalist or a private equity firm. We’ve built it all on our own. We’re not out there with our hand out. We’re really just working the American dream.”