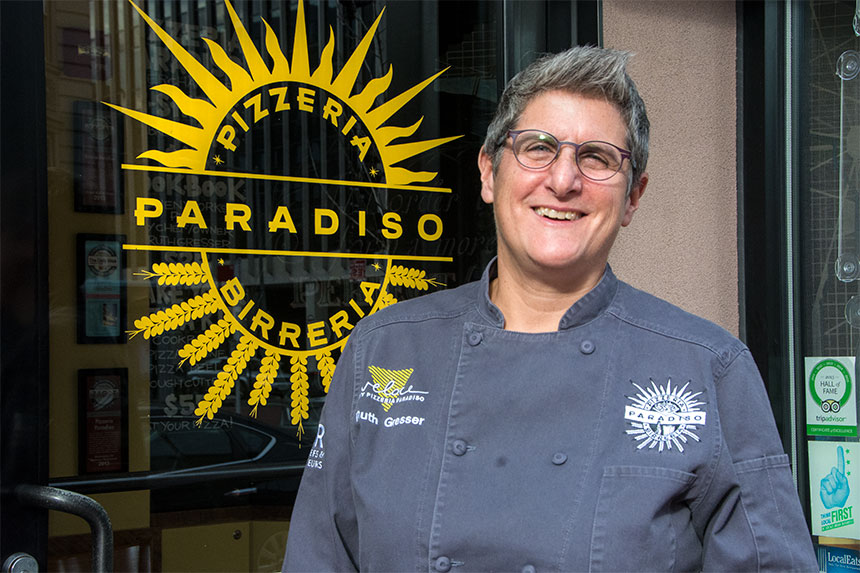 Capturing lightning in a bottle, for many business owners happens once, if they’re lucky. Chef Ruth Gresser has found ways to capture lightning over and over at Pizzeria Paradiso in Washington, D.C.

“I had an idea and I was in the right place at the right time twice,” Gresser says. “Once with pizza and once with beer.”

Gresser opened the first Pizzeria Paradiso on the second floor of a Dupont Circle townhouse in 1991 before district residents really knew what Neapolitan-style pizza was.

“What this restaurant was in 1991 was a high-quality, chef-focused, casual alternative to fine dining and that is still what people are looking for today,” Gresser says. “We’ve maintained the standard of quality and throughout the opening of multiple locations.”

In its modest footprint of 1,100 square feet, the original Pizzeria Paradiso was an instant hit and grew to three locations: Georgetown in 2002, a larger, relocated Dupont Circle restaurant in 2009, and Old Town Alexandria, Virginia, in 2010.

Gresser’s vision caught fire again when she decided to turn the basement of the Georgetown location into Birreria Paradiso, quickly becoming a sought-after beer destination. Today, all three locations include a Birreria Paradiso, with a beer list of 200 bottles and 12 to 16 beers on tap, depending on location.

In 2015, Gresser ventured out yet again to redefine pizza by opening a fast-casual concept, Veloce, initiating her own vision of how the trendy concept style would operate.

Pizza Today sat down with Gresser at Paradiso in Dupont Circle last fall to see what makes the restaurant family tick. It was quickly apparent what’s at the heart of the restaurant: its people. Upon our arrival, Gresser’s first course of action was to introduce her administrative staff and tout their praises. The comradery was evident with Matt McQuilkin, director of operations; Mike Solsberry, director of finance and human resources; Josh Fernands, executive beverage director; Drew McCormick, assistant beverage director and Carlos Gonzalez, executive kitchen manager.

“I go back to this image that I had when we were building out the first restaurant and I had this vision… it was me standing at the pizza counter and I had my work T-shirt and apron on and I was standing there and I was just laughing with a couple people who were working there,” Gresser says. “That to me represented what Paradiso was going to be. The thing that I was creating more than anything else was a nice place to work and a nice place to be. Somehow that has become the defining characteristic of Pizzeria Paradiso. It’s our culture. There is an environment of respect and an environment of support.”

The dynamic has a strong family feel. Perhaps the most poignant testament lies in the longevity of the Paradiso staff. Of its 130 employees, she says that roughly 25 percent have been with the business for what would be considered a very long time, with a few dozen exceeding 10 years.

Staff has been key to Paradiso’s growth. “We’ve been able to put good people into each location as we expanded,” Gresser says.

Each Paradiso has a cohesive look of brick, reclaimed wood, a painted cloudy blue sky on the ceiling and creative beer storage displays. A wood-burning oven takes center stage in an open kitchen with make-line seating. Each Paradiso uses the same food menu, while beer menus vary slightly.

But that doesn’t mean each location is the same. “We don’t change who we are for our locations, but the restaurants do change according to where they are located,” Gresser explains. “The customer is different and the staff who work there is different. So the restaurants get their own personalities without us having to try.”

You also will not see soup or pasta on its menu. “When we were young, people would ask for soup so I made soup for a little while,” Gresser says. “What I found is that people didn’t really come to us for soup, they came for pizza.”

Adding a pepperoni pizza, The Macellaio, a few years ago was one of the few menu changes since Paradiso’s inception, Gresser says. The Macellaio features tomato sauce, pepperoni, pork sausage, red onion and mozzarella ($14 for a nine-inch).

For Gresser and Paradiso’s fans, it’s the dough that really sets it apart. “The thing that is different about our crust is that it’s much breadier than a lot of crusts of today,” she says. “I describe it as a country bread.”

Counter to Paradiso’s concise food menu, its beer menu is extensive and meticulously executed with beers served at the correct temperature and in appropriated glassware, enticement for beer enthusiasts. But it’s approachable to the average guest and staff has been thoroughly trained on the beer program. “We’re also an accessible beer place,” Gresser says. “We are as happy to serve someone who doesn’t know the first thing about different kinds of beer.”

Beer accounts for 25 percent of overall sales. The restaurants host tap takeovers of exclusive and sought-after beers. Paradiso has also held beer dinners, like the Belgian Trappist Beer Dinner, featuring a five-course meal paired with the iconic beer style in November 2016. The event commemorated the first-ever beer dinner, as well as the pizzeria’s 25th anniversary.

To mark its 25th anniversary, Paradiso threw an invitation-only kick off-celebration at the Georgetown location for regulars, past and present staff and members of the industry. All locations offered a week-long throwback menu and rolled prices back to 1991 rates. The Paradiso pizza was just $6.95.

Gresser hired a public relations firm to help promote the anniversary. She tapped the PR firm for Veloce’s launch in 2015 and has maintained a partnership since. “I think it was something we added when it was appropriate,” she says. “I think one thing is the competition in DC is very, very tight. There has been an explosion of pizza places in the last eight years.”

As Paradiso revels in its 25-year mark, the pizzeria is embarking on a fourth location in Hyattsville, Maryland. The new location is a bit different than other locations. It will reside within an arts center. Gresser says they are excited to be a part of the active and vibrant community.

“We are going to have four locations, but I still feel like we are very grassroots, local and independent,” Gresser says. Paradiso’s growth has been gradual. “Slow and steady,” she says, “it has worked for us.”

Paradiso has achieved great success thus far. While Gresser did not divulge an exact sales figure, she says, “What I have been comfortable with at this point is saying that this group is above $5 million and below $10 million.” Three keys to reaching such aspiring heights have been, she says, “to not overreach, to pay attention to the business and to have the right people.”

Where is the next lightning to capture? Gresser works with aspiring restaurateurs through her role as president of the board of Women Chefs and Restaurateurs. “The next thing I want to see is more women in the role that I have of running a successful business,” she says.