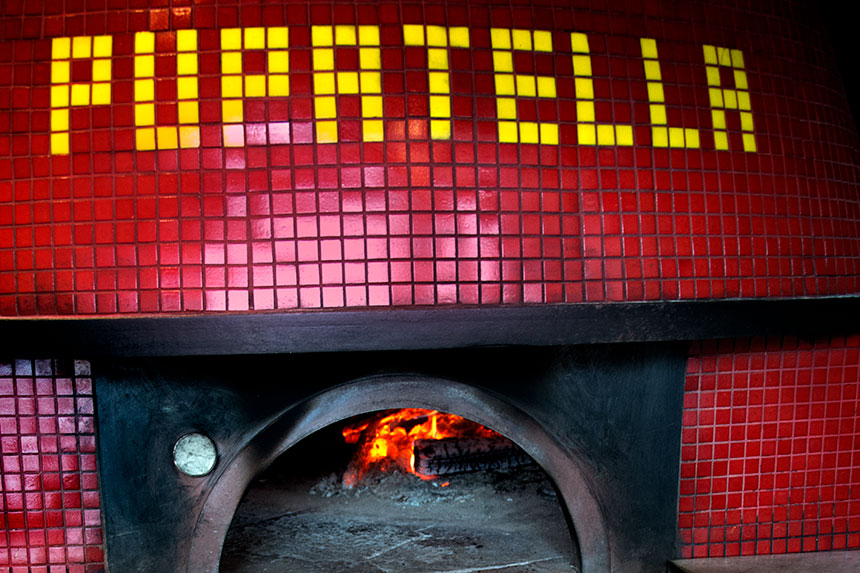 Pupatella in Arlington, Virginia, has a style all its own. It’s not what many think of when they enter a Verace Pizza Napoletana (VPN)-certified pizzeria. First, Pupatella is a counter-service spot. When customers walk in, the first thing they see is the pizza make line and a beautiful, red-tiled dome, wood-burning oven with Pupatella centered in bold, yellow-blocked letters. The spot has a directional flow right to the ordering register. Just to the left is a massive carousel of house-made gelato, reminding customers to save room for dessert.

The next elements that draw attention are the vivid pops of color that contrast its backdrop of metal tables and chairs. Large art pieces adorn each wall with a Warhol-meets-graffiti-pop-art vibe. The look is a combination of the styles of co-owners Enzo Algarme and wife Anastasiya Laufenberg.

Born and raised in Naples, Italy, Algarme named the pizzeria after his grandmother. “Pupatella was my grandmother’s nickname,” he says. “It’s a really strict Neapolitan endearment term. It means ‘little doll.’”

While the storefront opened in 2010, Algarme and Laufenberg introduced Pupatella to Arlington residents long before that, slinging pies out of a food cart situated in front of a Metro station, quickly garnering fans of Washington, D.C. commuters. Though the pizzas were not certified Neapolitan with the food cart’s gas oven, Algarme perfected the classic style, while also serving up his favorite fried foods from Naples.

Finding a brick-and-mortar location proved challenging for Algarme. “We were looking for places for a year or two,” he says, “but no one would rent to us because no experience, no money. Everyone wanted a franchise or someone who was established.” When he noticed that a Wilson Avenue business had closed, he reached out to the landlord to give Pupatella a shot, setting the stage for its current location.

Pupatella is an example of what can be done in a modest location. “When we first got the space, we were like ‘It’s not in a great location, no parking,’” he says. The tiny commercial space has steadily turned into a windfall for the pizzeria as its 2015 sales topped $2.5 million.

It’s taken an exorbitant amount of work to get there, Algarme says. He solved the parking issue by working with local businesses that were closed in the evenings.

When the restaurant next door closed, Algarme acquired the space and doubled the size of the dining area, kitchen and storage, as well as adding a small bar. Last year, Pupatella expanded its patio with a covering and heating units. The outdoor space showcases its original food cart and a tiki bar that are used for events.

As Pupatella has grown, the most vital additions have been in staffing. Training staff to adhere to the strict standards of its VPN certification has given Algarme a chance to step away from the day-to-day operation. “The first three years, I was the only one,” Algarme says, of making pizzas. “Every pizza that came out of here touched my hands. Finally, after five years I can step away and enjoy my life a little bit.” He even enlisted his sister to manage the restaurant. Pupatella now employs roughly 35 people during its summertime peak season.

The product quality and consistency has been on point since the beginning and local, regional and national media have taken notice. The Washington Post, Eater.com, The Daily Meal and other have consistently named Pupatella to their “best of” lists.

Most popular pies include the Margherita DOC ($13) and the Prosciutto Arugula with fresh basil and Parmesan ($13). The Capricciosa ($13) has made The Daily Meal’s list of “101 Best Pizzas in America.” It features sautéed mushrooms, marinated artichokes, prosciutto cotto and fresh mozzarella.

When Algarme first opened, he considered making Pupatella’s a fast-casual concept. But he quickly deviated from that idea. “We wanted them to try the real thing before they go all crazy,” he says. “We thought it was nice to have a structured menu. Of course, you can create your own … but to give our favorites, people appreciate that more.”

Another aspect of its menu focuses on fried food. “Here are a few items that you can’t really find, which will be unique, so we want it to be a friggitoria,” he says, explaining that friggitoria means fry shop. “And we also have the fried calzone, which nobody else was doing. We’re going to do a few things but we are going to do them right.”

Popular dishes in the Friggitoria are Arancini with Sausage ($4.50), Panzerotti (fried potato croquettes stuffed with prosciutto and mozzarella — $4.50) and Fried Fresh Mozzarella Balls ($4.50).

Algarme has gradually expanded Pupatella’s menu, getting creative on its special’s menu. Items that sell well are considered for the full year-round roster.

As Pupatella’s operation has streamlined, Algarme sees its growth potential. Enter Berger with experience and acumen in very specialized restaurant franchising. A customer turned Pupatella investor, Berger has worked with Algarme to make the restaurant scalable for potential franchisees with a finite operations manual, processes and cohesive branding and design strategies. “We have all of our franchising paperwork in place,” Berger says. “We’ve started offering franchises. We’re registered in Virginia and Maryland.

“To grow a restaurant group into multiple locations there are some basic, practical things that you need to know,” he says. “I brought that to the table without changing any of their obsession over the authenticity, the trueness, the VPN.”

As Algarme advances the Pupatella concept, he reflects on its success thus far. “It’s nice that we’ve really grown organically from a little food cart to a little store — and then the store became bigger, the patio became bigger. To see us over the last six years constantly growing.”