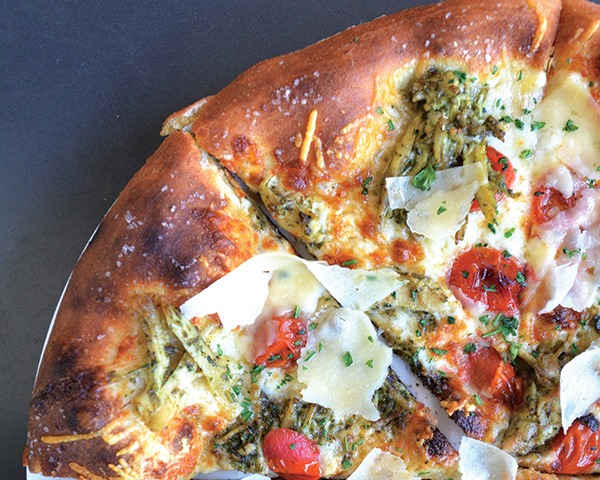 It isn’t everyday that a well-developed, successful restaurant brand becomes available, so when restaurateur Scott Kilpatrick had the opportunity to purchase Sauce Pizza & Wine, he and his investment group jumped at the chance to acquire the brand in January 2015 from Fox Restaurant Concepts.

With 15 concepts and more than 50 locations, Fox Restaurant Concepts developed a polished fast-casual pizza brand with the first Sauce opening in Tucson in 2003. The pizzeria has grown to nine locations in Phoenix and Tucson.

Kilpatrick says that Sauce was a fast-casual leader in Arizona before people really knew what fast-casual pizza was. “That’s Sam for you,” Kilpatrick says of Sam Fox, Fox Restaurant Concepts’ founder. “He’s one of the most creative guys on the planet.”

The two have been acquainted for more than 15 years before Fox sold the beloved brand to Kilpatrick.

Kilpatrick acknowledges that he didn’t have a background in pizza or even fast-casual, but he’s experienced in growing a brand. He co-founded RA, a sushi restaurant the he helped grow to 25 locations.

Purchasing Sauce gave Kilpatrick the opportunity to grow the pizza concept and take it to new markets. He was drawn to what the Sauce brand offered with its menu focus on salads as well as pizza and its healthy options. “We just thought it was so differentiated from the new fast-casual pizza guys that we think that we really have an opportunity to do some great things with it,” he says.

It’s been more than a year since the acquisition and Fox’s team helped make the transition run smoothly. “I had an office inside the Fox Restaurant Concepts headquarters over on Camelback,” Kilpatrick says. “We basically did a yearlong transition with them where they still did all of the accounting, the IT, the marketing, everything for us which was great for two reasons. One, we didn’t have the infrastructure to do that. Two, it was really easy for the stores because nothing changed. They still submitted their invoices the same way. There was still the same payroll company.”

Utilizing Fox’s resources in the interim allowed Kilpatrick time to assemble the Sauce headquarters’ team from scratch. He tapped some of his key personnel who were no longer at RA to handle human resources and operations, while also bringing in fresh talent in marketing and finance.

With an experienced crew of nearly 400 employees, each store manager runs their own show, Kilpatrick says, adding that the corporate staff provides support and resources. Sauce has a fun, fast-paced work environment with competitive pay and the company recently rolled out a 401K program.

From day one, Kilpatrick marveled at pace of the fast-casual pizzeria, up to 300 to 400 covers during lunch. “It’s very difficult to keep the pace up,” he says. “The way to keep it quick is obviously to be prepared. Our kitchen staffs get in here at 7:30 in the morning to make sure we are prepped and ready to go. It’s really just execution from the team, having the right people in the right places and the right number of bodies and just crushing the food.”

An energized staff is key to the busy Sauce restaurants.

“What was a bit surprising for me was the challenges in running a fast-casual brand,” he says. “You have to do a lot of covers. You have to generate a lot of guests because the check average is fairly low. That’s surprised me from a restaurateur perspective. Coming in as a guest it looks like no big deal. But there are a lot of moving parts and pieces. What was really eye-opening for me was ‘wow there’s a lot happening here.’

“We added an Italian Chop Salad, changed the wine list a little bit — really nothing major,” he continues. “The concept’s really, really good. We didn’t come in and say we had to blow this thing up and start over.”

Dough, sauces, dressings, cookies and much of Sauce’s menu is made in house at each location. It’s an area that Kilpatrick would like to showcase in the brand even more moving forward. He has been working with architects and designers to see how Sauce can incorporate its from-scratch, quality products into the design of new locations. “We’ll continue to try to tweak it,” he says, “just to kind of get that message more out in front without writing all over the walls. So we are trying to figure out a unique way to do that.”

When it comes to the pizza menu, Kilpatrick says Sauce doesn’t get carried away with its toppings. “You have to stick with what is tried and true,” he adds. The 20-plus toppings offered are chef-driven with cooking techniques like caramelized onions, sautéed spinach and roasted red peppers. The signature pizzas tout unique pies like the Rosemary Potato with spinach, feta and olive tapenade ($9.75). The Spicy Chicken Sausage is topped with poblano peppers and smoked mozzarella ($10.25).

Sauce offers online ordering, delivery and large-party to go. The services are beneficial for its Millennial and business customers.

With a check average of $10.50, Kilpatrick says, every little bit you can do to boost it helps. He is also expanding Sauce’s beverage program. While all locations offer beer and wine by the bottle and glass, two new Arizona locations in development will feature two wines and two local craft beers,  both on tap. Sauce is also working with a vendor to add a cocktail program that will not require a bartending staff.

“We don’t ever expect Sauce to be a big bar hangout by any means,” Kilpatrick says. “But at the same time we think offering some things that are a little bit distinctive to the brand could certainly help with the guest experience.  At the end of the day, it’s all about the guests.”

Though Sauce does some traditional advertising like billboards, its marketing concentration is more socially driven. Sauce encourages its fan base to engage with social channels through promotions and contests like the #awesomesauce Instagram contest, where guests post their #awesomesauce moments for a chance to win a year of Sauce gift certificates.

“I still think the best marketing is word of mouth and taking care of every guest that walks through the door,” Kilpatrick says.

As the new Sauce leadership focuses on its guest experience, they keep a keen eye on the brand’s growth, with a planned opening in Tucson and one in the Gilbert area of Phoenix this summer. “We like to say that it’s responsible growth,” Kilpratrick says. “We’re not in a race. We don’t have any pressure to get to a certain number in a certain timeframe. We want to find great locations that we can afford and not go out and sign some crazy leases that aren’t sustainable long term. The initial thought process was to back fill our existing markets. It’s easier to open in your home market. But we would really like to test the waters outside of the state.”