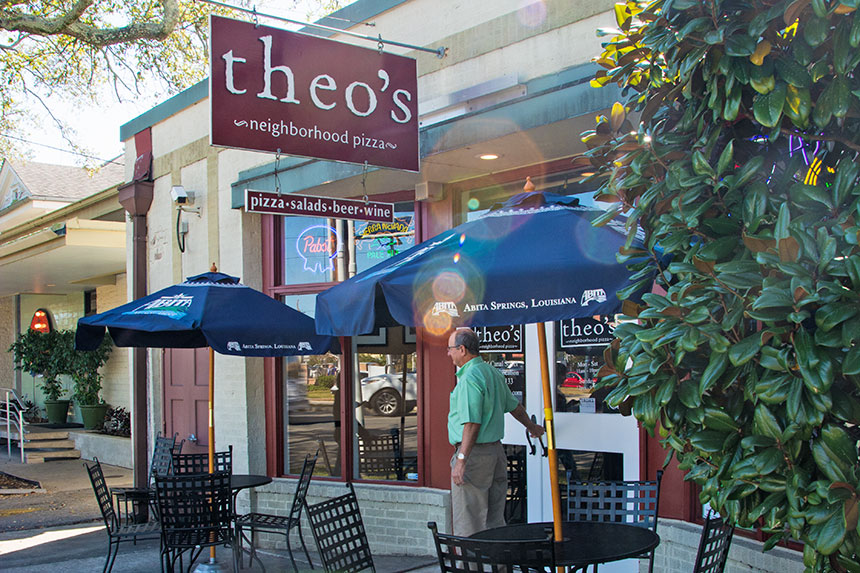 When three lifelong friends open a pizzeria in New Orleans, you know the ride is going to be fun. That’s been the case for Theo’s Neighborhood Pizza, which debuted on Magazine Street in 2004. And while owners Greg Dietz, Ted Neikirk and Jammer Orintas have certainly had a good time growing their business, Theo’s didn’t exactly get off to the easiest start thanks to a natural disaster of epic proportions.

“We were about nine months old when Katrina hit,” Orintas says of the infamous hurricane that made landfall in Louisiana on August 29, 2005.

How did the trio keep Katrina from ruining their business?

“It was just crazy,” says Orintas. “Katrina was August 29 and we came back on September 5. We got a permit from the city to come back in and clean the place up and get to work. At that time, you couldn’t get food and there was no one to sell to besides the National Guard. There was a dusk-to-dawn curfew, but if you were a business owner you could get a permit to come in. The city was still closed. NOPD was operating out of a city bus. We had a little chemical fire here and the Chicago Fire Department came and put it out. When we opened up, the South Carolina Health Department came and gave us an inspection.”

The water was non-potable, so the three had to put their heads together to figure out how to make food.

“We all sort of went our separate ways and reconvened in Arkansas, where we bought a bunch of new restaurant equipment, got 500 gallons of water and towed it back so we could make dough and we opened up,” says Orintas. “We had pepperoni pizza, sausage pizza, Bud, Bud Light, Coke, and Diet Coke, and that was it.”

Ironically, while the devastating hurricane could have easily shuttered Theo’s, the end result may be that it helped the business take off. Sales tripled quickly after re-opening.

“Before Katrina, we averaged about $30,000 a month,” Orintas says. “A month or two after Katrina, we were doing about $90,000. There weren’t any other options. You couldn’t eat anywhere.”

On that September day when Theo’s Neighborhood Pizza reopened in 2005, there was initial cause for alarm.

“For an hour nobody came in,” says Orintas. “You could see cars driving by and one of the girls working for us said, ‘I don’t think they know we’re open.’ So we literally took some pizza boxes and taped ‘Open’ on them and took them outside. Instantly there was almost a wreck out front as somebody slammed on their breaks. Next thing you know, we ran out of food. For six weeks, we ran out of food every single night.”

Orintas, Dietz and Niekirk (all three were present for our interview, though Orintas fielded and responded to the vast majority of the questions) have been friends since early childhood. Their longstanding friendships helped them handle the stress that came with opening a business, seeing it shut down by Katrina and then

“We all grew up together in Arkansas,” Orintas explains. “Greg and I played football together in second grade, and Ted and I went to school together in fourth grade. So we work together really well. We split the duties up pretty well amongst ourselves and specialize in different areas.”

During the post-hurricane bounce-back period, the three were able to work on their business and make on-the-fly changes to operations that have benefitted them down the road as they’ve grown.

“Before, we were table service,” says Orintas. “But after Katrina we couldn’t do it. You could sit at our tables, but the pizza was served in to-go boxes with paper plates. And that’s when we realized it would work for us to do sort of a semi-table-service format. So now we do it to where you walk up to the bar to order and get a table marker. Then we refill drinks and take care of you that way. Now that’s how all four of our stores are doing it, and that’s because a lot of our customers got used to it and liked it.”

When asked why he thought customers liked the new direction, Orintas answered: “When you go into a table service restaurant, you know you’re going to have to tip 20 percent at the end and add it to the bill. We have a lot of families that like to come in and eat. It’s a quicker process for them and not as expensive. We’re also flipping tables faster. So we realized this was a win-win. Some people don’t like it, but the majority of the people do. For us, that model works.”

“We really operate as a team here. So the kitchen staff and the front-of-the-house staff all share tips,” Orintas says. “Kitchen guys are running food out and interacting and getting refills. So it makes it a more cohesive environment.”

In 2009, a second Theo’s location was opened. Store No. 3 came in 2012, followed by store No. 4 last year. The company’s menu features a variety of appetizers and salads, along with pizza, sandwiches and desserts. The emphasis has been on freshness and consistency as the company has grown.

“When we opened our third location, we hired a baker to do our dough outside,” Orintas says. “We were doing like 500 pounds a day — and we had three different sets of hands touching it twice per day. We weren’t getting a consistent product since we were doing it at different locations. So we brought it all to one spot. There’s a local baker here that I gave our recipe to. We worked with them for about a month until it was perfected. They make it every night, let it sit for 12 hours and then deliver it. We use it 12-24 hours after that. So it sits for 24-36 hours total before we use it.

Dough and bread aren’t the only components Theo’s has successfully outsourced. The company is also seeing positive results by using a third-party delivery company.

“We partnered with a Louisiana-based company,” Orintas says. “So a third-party company is doing it for us. I’ve never worked for a pizza place that delivered, so I don’t really know how all that works. But this was a fairly inexpensive entry point into delivery so that we can see if it works. If it really blows up, we may bring it in house. But right now we’re doing it at two of our four locations. We do about 15-18 orders a day out of each location. In the middle of the weekends we’ll do around 60 between the two stores.”

Much like, say, Uber, this is an app-based platform that offers end customers a cashless transaction, Orintas explains. “The customer just puts the credit card on file and the delivery company doesn’t have to do anything with the customer besides drop off the food.”

Theo’s announced the initiative on social media, via e-mail and with in-store promotions. So far, so good, Orintas says.

“It’s easy for us. They deal with any customer complaints. If it’s something we mess up, we fix it. If it’s something they mess up, they assume that responsibility for making it right with the customer,” he explains. “It’s tough to go from no delivery to four stores doing full delivery. You have to get your computer systems and all of your systems ready for that. How do you have eight or 10 delivery drivers and the payroll behind all of that? This way, it’s very easy for us to do. They take a percentage of sales. It’s a very small percentage. And the end-user pays a $6 delivery fee. So that’s how they make their money.”

While customers have not completely balked at the $6 delivery fee, Theo’s is looking into ways to work around it for regulars.

“We’re actually working on getting to where we have a code that our established regular customers can use when they order,” Orintas says. “If you are a regular customer, you’ll be able to enter the code and we will pay the $6 delivery fee instead of the customer having to pay it. I think it does make a difference when you’re ordering. And, for me, I think it’s cheaper to pay that $6 than to get the insurance and to hire additional staff for delivery and deal with delivery bags and computer systems and storage and all of that.”

The real upside to the experiment?

“The average checks on our delivery orders are a lot higher than I thought,” Orintas confides. “We’re at that $35-40 range on average, which is huge. On a weekday we add $400-500 on our sales, times two because we’re doing it at two stores. On a weekend we add $700-750 for each of the two stores (that offer the service). That’s a lot.”

Jeremy white is editor in chief at Pizza Today.