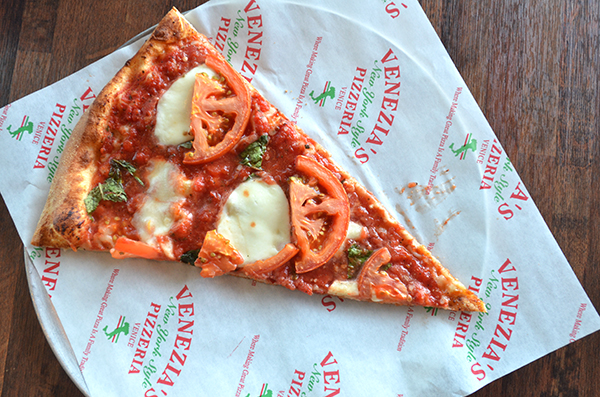 From Toils to Triumph

A glance at Venezia’s New York Style Pizzeria reveals a successful Phoenix-based operation with five locations that crushed through annual sales of more than $14.5 million. The booming pizzeria has even risen to No. 6 on Pizza Today’s 2015 Hot 100 Independent Pizzeria’s list and it’s poised to break into the top five in 2016.

Success didn’t’ come easy or quick for Owner Domenick Montanile. The fruits of his labor have been paved with struggle before Venezia’s found the prosperity it has today.

Montanile grew up in his father Frank’s fine-dining Italian restaurant in Albuquerque, New Mexico, groomed to follow in his father’s footsteps and continue the family pizza making tradition.

He opened the first Venezia’s in a former failed pizzeria in the Tempe area of Phoenix in 1998.  Starting with the New York-style pizza recipe handed down from his father, he created a straightforward pizzeria concept, eliminating some of the more complicated Italian dishes he grew up with. “I felt like if I was going to open my stores, I want them to be simplified,” he says. “So I decided to simplify things and shorten the menu a little bit, make it to where we can prep everything in the morning.”

“It was rough for many years,” Montanile says. “Ironically enough after year three, I had pretty much given up. My wife, Jamie, had just been pregnant with our first child and I couldn’t even pay the bills. All I could pay was my mortgage, that was it. I was working seven days a week, open to close.”

Times became so meager for Montanile that he sought full-time employment at a local utility company. “I would go in at six in the morning, do my orders and go to Insight (and) work eight to five, come back from there and work to close. It just wasn’t profitable.”

Instead, Montanile put a newfound vigor into his fledgling operation. “At Insight during lunch hour, I could actually have time to myself,” he says. “I started developing spreadsheets and bonus programs for the managers just trying to incentivize them because I couldn’t be there as much because I had to support myself.”

His efforts paid off as Venezia’s began to see an increase in returning customers and enjoy profits for the first time in the young restaurant’s history. Montanile capitalized on the new success by acquiring a loan to open a second location in 2003. As that location also began to take off, Montanile was able to quit his full-time job to fully concentrate on his pizzerias.

“We have a corporate office,” Montanile says. “It’s just me and my assistant, and then I have two area managers. Both of them have been there for over 10 years.”

Venezia’s has 250 to 275 employees, so management staff is vital to smooth operations at the store level. “Between managers and shift leaders, there’s over 30 because each location has usually three salary managers and a couple shift leaders plus a kitchen manager.”

Montanile increases his success rate at each store through sales, labor and food cost bonuses, plus a multi-tiered, month-end bonus.

Venezia’s is meticulous about the products used and their freshness. Montanile says he sticks to his core products unless there are any issues with consistency.

Its menu consists of four sizes of pizzas, including a 24-inch party pizza and slices. The pizzeria offers more than a dozen specialty pies and daily pizza and slice specials. Montanile also recently introduced popular, low-carb Pizza Bowls made of favorite specialty pizza toppings without the crust, baked to order.

The North Phoenix location is the only location that serves bottled beer.

Moving forward, Montanile will not rely on maintaining the brand’s 10- to 20-percent sales growth yearly in its five locations. “We’ve gotten to a max capacity at some of our stores. Like my store in Gilbert does a $3,000-hour and it’s just at its peak.”

Right now, Montanile is focused on building name recognition and a steady client base for its newest location in North Phoenix, which opened last year.

With more that 250 online orders a day, Venezia’s is rolling out a new mobile-responsible Web site with a revamped online ordering system with upselling and navigation enhancements.

Montanile is venturing into a new direction by concentrating on the real estate side of his business. “I’ve bought a couple of the buildings where my stores are at,” he says, which could pay lucrative dividends down the road.  “I’m working on the third building right now.”