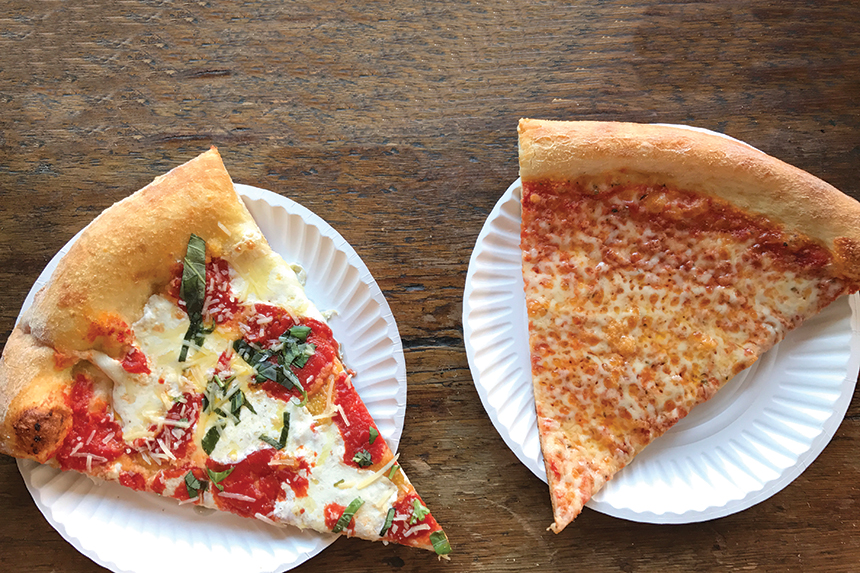 It’s a warm summer afternoon in May when we roll up to Willamsburg Pizza, an unassuming slice joint that pretty much embodies Brooklyn. The small restaurant is gritty, with scratched tables that don’t quite level out, an open door that brings in all sorts of Brooklyn characters and pizza cases full of traditional oversized slices and square, chunky Grandma cuts.
Williamsburg is helmed by Nino Coniglio, who burst onto the pizza scene when he took home the coveted Pizza Maker of the Year award at the 2016 International Pizza Expo, and his partner Aaron McCann.

Coniglio is unapologetically Brooklyn, with the accent and attitude to prove it. What he can do is make a mean pie, a feat we witnessed when we visited. Coniglio started making pizzas when he was a pre-teen, working the pizza circuit and sous cheffing around NYC. He even did a stint at the pizzeria he now co-owns. “My rule was I would never stay at a place more than two months. Because in two months I could learn all the things they were doing wrong and all the things they were doing right,” Coniglio says. “It was like ‘What else do I have to learn here?’ And then I’d go on to the next place, trying to learn as much as I can.”

At some point, he started tossing dough acrobatically and went to a pizza show to compete, placing second and traveling the world. By age 23, he had opened his first pizzeria, Pizzeria del Corso, with just $30,000.

“We got all these write ups, and there’s a New York Times video about us,” he says. Finding employees was difficult because the pizzeria was nearly 30 blocks from the last subway stop. Coniglio admits lack of understanding about the business, coupled with being young and employee issues, taught him hard lessons in his early days as an owner. In New York, articles and television appearances are a dime a dozen. He knew he had the best product, but didn’t know how to run a company. “What I learned from that experience is that it’s not just having the best product,” he says. “It’s the atmosphere. It’s the service. It’s the marketing. It’s all of these things combined.”

After his pizzeria closed just under three years from opening, he floated around from job to job before hitting Craigslist. He saw an ad placed by his now partner, who was opening a new pizzeria in a former Chinese restaurant. McCann was looking less for an employee and more for a consultant. Coniglio eventually became a partner, and Williamsburg Pizza was born five years ago.

After gaining the attention of Serious Eats founder Ed Levine, “from there, everybody started coming in,” Coniglio says. “We were like some of the first guys to really come in and revive old-school Brooklyn pizza and Grandma pies. We were doing different topping combinations, like our apple (and) bacon, kale sausage taleggio, and the neighborhood loved us. This is now the strongest Italian neighborhood in New York.”

Two years later, Coniglio opened his second store on the Lower East Side. They own seven units in all, including a Williamsburg Pizza presence in the Barclays Center. He admits he worked up to 90 hours a week when he owned just one store, but as more opened “what starts to happen is that now you can afford the type of management structure and the cushion” of additional employees, Coniglio says. “When you have one or two (stores) and a guy doesn’t show up, you’re screwed. Or a guy quits, or two guys quit at the same time –– you’re really screwed.” With more stores, they’re now able to move employees around as needed.

Williamsburg’s top seller is The Brooklyn, a simple, oversized mozzarella and tomato sauce pie at $19. The Tartufo is also popular. It features fresh mozz, Parmigiano-Reggiano, rosemary, crimini mushrooms and white truffle oil ($26). The Apple Bacon, with smoked fresh mozz, Parmigiano-Reggiano, Italian sausage, pine nuts and taleggio cheese ($32) has become a favorite as well. There are also a small number of salads and heroes, but sales are decidedly geared toward pizza.

They prepackage their cheese into individual packages to control how much goes on each pizza and weigh some products for both consistency and control. Dough is fresh and pizzas are baked in a traditional deck oven.

At the original store in Brooklyn, they do more pies for delivery, but the Lower East Side unit does mores slices (the store is open until 5 a.m. because the area is packed with bars).

Marketing is a huge component of Williamsburg’s business. Coniglio is currently filming a documentary that details his rise in the industry (and even how he met his fiancée at International Pizza Expo). Brooklyn Pizza Crew assists in Williamburg’s video production and social media efforts, essentially helping to build Congilio’s reputation as an award-winning pizzaiolo and business owner.

Delivery is available, but via GrubHub, which has become an important tool for his business and is almost a necessity in NYC. Coniglio admits he even prefers to order from subpar restaurants because they’re available through GrubHub even though his favorite spots are not. He is also working with a company to build his own app. “People aren’t ordering from their desktop or from their computer,” he says. “They’re ordering right from their phone. And it’s not just young kids. It’s everyone.”

An app will allow his company to remain top-of-mind, ease ordering and will allow customers to build loyalty points for future orders.

In the future, Coniglio and McCann are straying from traditional slice shops with just a handful of seats to a full-service model with at least 65 to 70 seats. The new concept has a full bar since liquor licenses are easy and affordable to
attain. “Once you have that type of place, you can really do those huge numbers if you do everything else right,” Coniglio maintains. “Now you have waiters who are taking home three, four or five hundred a night in tips per shift. People are fighting over that job” as opposed to counter service, where the ability for employees to make more money is capped by hourly wages. Company-wide, he employs right around 45 people.

“It’s a rough scene,” Coniglio says. “I used to think it was just New York, but it’s everywhere.”

Coniglio says he’s begun tightening up his operations as he plans to expand.

“New York is a pretty crazy market, too, because when it comes to pizza, it’s built into our DNA, and it doesn’t even matter if you’re a native New Yorker or you moved here three years ago. Pizza is everywhere. It’s almost on every block. There’s only so much you can charge, even if you’re using the best stuff,” he says. “If you charge more than $3 or $4 per slice, you’ll have a riot outside your door.”