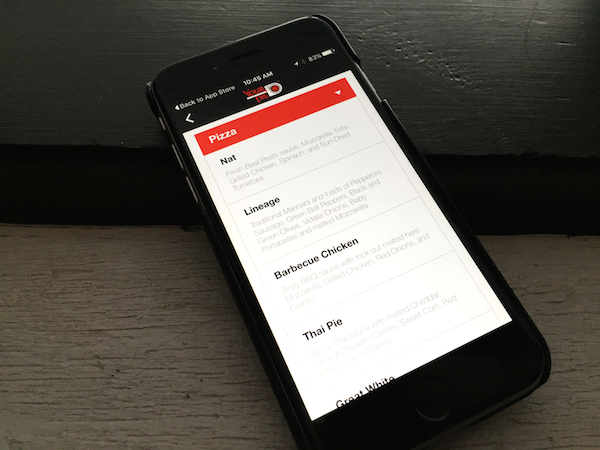 Technology: On a Roll

It seems just about everyone has a smartphone or tablet app these days –– from large chain restaurants to your local hardware store. In fact, a Florida woman being held hostage made headlines last year after she used the Pizza Hut app to send out a plea for help from 911 in the comments section of her pizza order. It’s not every day that a pizzeria app saves a life, but it can make life easier for your staff and your customers.

The Pizza Press, which has locations in Anaheim and Orange, California, has had a mobile app for about two years that allows customers to order pizzas online, view the menu and identify the closest location. Ensuring order accuracy was a big driver behind the app, says owner Dara Meleki. “The build-your-own concept and assembly line process in pizza is trending really heavily right now,” he says. “We had to think about ‘how much we really take in phone orders, and how are phone orders really that accurate?’ We wanted to be sure that what the guest is asking for is accurate.”

Using the app, which is available through Google Play, the iTunes store, Facebook and The Pizza Press Web site, customers can customize pizzas and also place orders in advance. “If it’s Friday and you want to pick up a pizza on the way home for my kids, you can do that,” Meleki says. Aside from the convenience factor, he says that offering customers an app “keeps your brand relevant with them.”

To create its app, The Pizza Press worked with ChowNow, a Los Angeles-based company that has built a platform for creating custom-branded apps for restaurants across the Unites States. “It’s definitely an out-of-the-box solution, but at the same time it takes care of the criteria that we need as we scale our business,” Meleki says. He estimates that both Pizza Press locations each generate $2,000 to $5,000 per month in sales through the app (once they hit $10,000, he says, they might look at hiring a developer to create something that goes beyond an out-of-the-box solution).

Chris Webb, cofounder and CEO of ChowNow says: “customers who download the mobile app order three times as often as someone who’s ordered off the desktop.” He cites one pizzeria app powered by ChowNow that has been downloaded 5,000 times in the past year.

But what does it take for customers to download your app to give up valuable space on their smartphone or tablet? Webb says customers typically order off a pizzeria’s Web site the first time around and some (not all) will download an app after receiving follow-up messaging via email with links to download the app.

Your Pie, which has franchise locations in nine states, mainly in the Southeast, has had an ordering app for several years and, at several locations, recently beta tested a white-labeled customer loyalty app powered by LevelUp. At press time, Your Pie was in the process of releasing what founder Drew French called a “super app” that combines “all of our functionality in one app that will be a much better experience for the customer.”

Your Pie’s app allows for mobile payments, and customers earn a $10 credit after spending $100 (as the customer nears their $100 goal a pizza image within the app fills in). The customer loyalty app is a huge improvement over the magnetic stripe cards Your Pie used in the past, according to French. “The magnetic stripe wore out, and it wasn’t as clean from a user functionality,” he says. French’s goal is to create a seamless customer experience through the app, similar to the hugely popular Starbucks app, which combines mobile payments and customer loyalty into one app.

Whether an operator is creating an app for loyalty purposes, online ordering or both, French stresses the importance of understanding customers’ needs. “It’s important to know what your customer wants, and make sure you’re not putting an app out there to put an app out there,” he says. “Make sure the end product is something the customer wants. When company stores are willing to do early adoption stuff, most people were really excited to be test stores and have it in their stores from an early stage.”