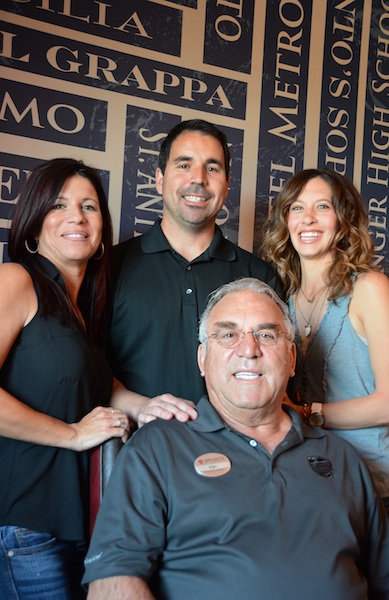 Meet Ken Spinato, patriarch of his family and president of Phoenix, Arizona-based Spinato’s Pizzeria, which will celebrate its 40th anniversary in November. On opening day of the original Spinato’s Pizzeria in Tempe four decades ago, sales totaled a mere 69 cents. Ken persevered, building a sustainable legacy for the next generation.

Hailing from an Italian neighborhood on the south side of Chicago, Ken and his wife Elaine moved to Phoenix in the mid-1970s for the weather, Ken admits, adding that he also saw a need for good pizza in the desert city. Daughter Nicole was just one at the time and son Anthony was born a year later. Soon after, Ken’s parents relocated to Phoenix to share in the family dream. Nicole and Anthony grew up in the restaurant and today have become integral to its success and its future.

Pizza Today sat down with the Spinato family at the recently opened 7th Street location this summer for a look inside this family-owned and operated business. Seated at a large round table in an intimate private room are some of the corporate team: Ken, daughter and treasurer Nicole Spinato-Kienlen; Anthony’s wife and assistant pastry chef Jaime, vice president Anthony, office manager Carrie Beshaw and Spinato’s public relations representative Angie Miller of The James Agency in Scottsdale.

The room was filled with adoration for the man who started it all. Ken opened the first Chicago-style pizzeria with a business partner in a small building in an industrial area of Tempe — a couple of tables, mostly carryout and delivery and no air conditioning.

Hearing the family talk about the early days, Jaime says, she found the perseverance that father-in-law Ken demonstrated after that first day moving. “That says a lot about him and his character and about what he believed in because he believed in this company from the beginning,” she says. “I think the neat thing is hearing the stories from Anthony, dad and Nicole how it was blood, sweat and tears that they literally put into this company.”

The lone store turned into three in the 1990s when Spinato’s franchised a Bell Road and Glendale location. But franchising, as it turns out, didn’t fit the company. “We just didn’t like it as a family,” Anthony says. “Nobody ran the restaurants to the standards that we wanted it done.”

The Spinatos became uncomfortable with the arrangement when they began seeing franchisees shifting from the company’s model and product standards, from changing sauce recipes to cutting corners on product quality.

“You relinquish some authority, some power when you do that,” Ken says of franchising.

The family noticed customers, who were originally ecstatic that a Spinato’s opened closer to them, were instead driving an additional 25 minutes to the Tempe store.

It took two years, but Spinato’s regained ownership of both franchised stores. “It’s our responsibility to our guests at the end of the day to deliver our promises and keep up with the integrity,” says Anthony, who took a lead role in reacquiring the locations.

The struggle to bring the franchise locations back into the company’s fold turned into a defining moment for Spinato’s Pizzeria. “We learned a lot in the direction we wanted to go,” Ken says.

Anthony agrees. “What you learn is that you have to stay committed to what you do, which is first and foremost the food, the quality, the consistency.”

Dough for its Chicago thick and thin-crust pizza is made fresh in the company’s commissary named Spinato’s Family Kitchen, which is adjacent to the Tempe store and company headquarters. Nicole is the master of the family’s coveted sweet pizza sauce recipe and secret seasonings and she keeps a tight grip on its quality control.

Italian sausage is made in house and Spinatos slices its meats that are shipped in from Chicago.

The company has experienced an evolutionary shift in the past half of a decade that has brought the concept closer to its roots while expanding and growing its brand. And it all centers around what the family calls the Spinato’s Experience. “We had to identify what it was that we did,” Anthony says. “All we do is take care of people the way we would if they came to our house.”

Along with the technical components — cleanliness, training standards and consistency, Anthony says, “It’s about what we did in terms of just service and love and warmth.”

In 2011, Spinato’s opened a large-scale, full-service Awatukee-area restaurant, a deviation from its small, mom-and-pop original store and last November, the company grand-opened an even larger 7th Street location. Both have private event spaces and full-service bars.

At the smaller locations, Spinato’s became known as a place to celebrate milestone events — birthday parties, anniversaries and rehearsal dinners. Anthony says they examined how to take the component a step further. Opening locations with event space and expanding Spinato’s menu were key in moving the concept forward.

The grandeur of the new locations could have stood as a stark contrast to the intimacy that Spinato’s guests were used to. Instead the two buildings were gutted and redesigned to bring the large spaces down to a warm and even cozy level. They achieved intimate facilities by breaking them into rooms. The 7th Street restaurant has a main dining room with a vaulted ceiling, bar, patio with fireplace, private room that features coved booth areas and another smaller family dining room. Comfortable executive armchairs and booths balance each room with elegant and rustic fixtures. Spinatos family photos personalize the walls of the larger private room, while custom wallpaper featuring places, streets and nicknames that are dear to the family highlight the family dining room.

Spinato’s took great care in updating its menu while keeping its staples. A pasta line and house-made soups were added. A spaghetti calzone was added and is now a top seller. The 7th Street location had enough space to add a separate bakery component to make soups and a rotating dessert line, as well as a separate kitchen for carryout and delivery. New menu items go through extensive testing in the family kitchen.

The Spinato’s Experience is also reflective in its employee programs. Company-wide, Spinato’s has nearly 300 full- and part-time employees that the Spinatos consider family. Anthony emphasizes quality of life as paramount to their employees’ impressive longevity. “I want this to be the greatest place they’ve ever worked,” he says. “They get four weeks vacation, full insurance, 401K. Our managers work 50 hours or less; they work five days a week.

“We want to grow them,” Anthony says, “as long as they lead with the passion, the integrity and carry the brand forward. I think it gets harder the bigger we get. And we don’t know when that threshold is going to because there is a certain standard. The $64,000 question is how do you maintain that standard?”

After spending years working at Spinato’s locations and as managers, as well as roles in the corporate office, the next generation has taken the reins at a time when the company has hit its stride and is experiencing tremendous growth.

Anthony and Nicole share a sense of pride, responsibility and tenacity to make their father proud. “You don’t want to be the generation that screws it up,” Anthony says.

Ken’s pleased with the direction his children are leading the company. “They’ve brought this probably two to three steps forward,” he says. “This is a whole other level compared to where I started.”

While Anthony and Nicole take more active roles running the business, Ken gets to do more of the table touching. “Nobody can talk to the guests the way he does,” Anthony says.

“Forty years ago, that’s what I wanted to do but I couldn’t do,” Ken says. “Now I’m getting to do what I always wanted to and I’m enjoying it.

“I’m just so thrilled about the legacy that it’s going to entail here with them and possibly their children, as well, because it’s a new age out there.”