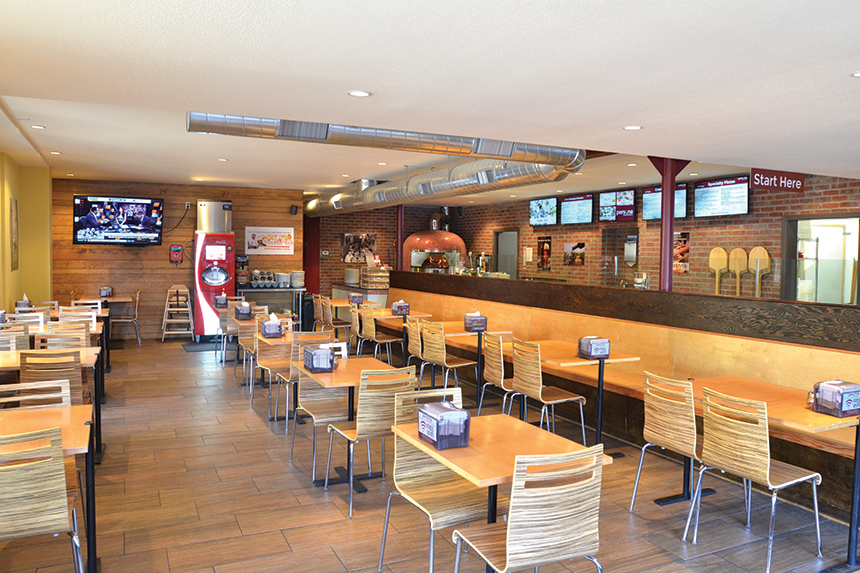 Everyone who comes to International Pizza Expo in Las Vegas has an origin story. Some started from scratch, some bought franchises and others rebuilt existing restaurants. Here we talk to five entrepreneurs about how they got started, the challenges they faced and the advice they have for new and aspiring operators.

Baer worked deliveries during college, and after a short stint as a financial planner, he went back to manage his local Domino’s. Ten weeks later he was running his own store, and from 1994 to 1998 he held several corporate positions within the company. He then moved onto franchising with Dave Wood, and the duo grew their company to 17 stores in northern Virginia.

In 2011 Baer and Wood sold their Domino’s stores to diversify, but they still had a vision for a build-your-own, wood-fired pizza concept. They toured several vendors to develop their processes and equipment, and in November 2015 the first Firenza was open for business. They’ve since sold more than 60 franchises, all of which mix and hand-stretch their dough daily.

Key to their rapid success has been a team of franchise executives with over 100 years of experience. “Good technology, good products and the look and feel of your restaurant –– it all has to play together, and we looked to people who were experts in those fields,” says Baer. Partnering with good POS vendors, suppliers and real estate agents is also key, especially when keeping a brand consistent across state lines.

Petruzzi worked several family restaurants in his youth, and he was an entrepreneur before he was old enough to drive. His early endeavors included a lawn care business, stereo installations and a tanning salon franchise. He went on to run a successful frozen yogurt franchise. With a family from Naples, he’d always wanted to open a Neapolitan-style pizzeria, and he leveraged his franchise and food industry experience as he switched gears.

Petruzzi was also a franchisor from the get-go. “My experience from the frozen yogurt business taught me that your concept has to be built for franchising from day one,” he says. “There was no way I could scale a wood-fired restaurant, but I wanted to serve a hand-stretched, Neapolitan-style pie.” To pull it off, he customized a gas-powered oven that wouldn’t require multi-unit operators to fret over temperature fluctuations. The first 1000 Degrees location took over a floundering mom-and-pop shop in New Jersey, beating previous annual sales within 80 days. The business now boasts franchises in 17 states.

Petruzzi’s tips for success? Do your homework as you scout locations, and have your business plans ready when you talk to landlords. “It’s hard to find class-A locations, and landlords need to understand that you’re not just another pizza concept,” he says. Just as importantly, know your margins, and choose your spaces and suppliers accordingly. “When you’re opening, every projection should be a worst-case scenario.”

Facing a tough education job market, Jackson left college to join Hungry Howie’s owner Jim Hearn in opening the company’s second location in small-town Michigan in 1976. Throughout the late 1970s Hearn, Jackson and their friends and relatives opened 12 stores in the area, and in 1983 they awarded their first franchise. Sixty-five more were opened within the next three years, and today the company has 600 locations in 21 states.

Regarding the first few locations, “Building a business is like climbing a staircase,” says Jackson. “There are constant steps to move up to, and it never ends. Once you’ve opened those first few stores, everything is more manageable.” He stresses the importance of investing in a quality POS system, as well as developing efficient marketing systems.

“We started with door hangers in the 70s, but eventually we had to pool money into more sophisticated programs that would advertise for multiple stores,” he says.

As for franchising, “it was a new frontier to develop training programs and talk to other people about food costs and labor,” says Jackson. To create consistency and provide for sustainable growth, they opened distribution centers in Michigan and Florida. “Some franchisors try to make distribution a profit generator, but we use it more to give our franchisees the tools for success.”

Hungry Howie’s also faced hard times in 2007, when Michigan’s auto industry collapse took its toll on the traditionally recession-proof pizza industry. “We looked at this as an opportunity to rebuild our 35-year-old brand, to take what we do and do it better,” says Jackson. They brought in external talent to help with branding, marketing and technology investments, and the company just completed its 27th consecutive quarter of same-store sales growth.

Dunn spent most of his career in marketing, working for corporate firms and operating his own agencies. As he branched out, he leveraged his business acumen, marketing skills and experience with food industry clients to open Chicago’s first Persona franchise in July 2016.

Why open another pizzeria in a town already famous for its pie? “Fast casual pizza is an amazing concept for the Chicago Loop, serving nearby office workers who want something quick but don’t want to compromise on taste,” says Dunn. “I looked at a few other concepts and brands, but once I met the Persona co-founders and tasted the food, I was sold.”

While Dunn inherited Persona’s product and business model set forth by its founders, he had to start from scratch as far as awareness and marketing were concerned. Only two other Personas were operating at the time –– one in South Carolina and one in California –– and Chicagoans had yet to learn about the brand. To anchor himself in the market, Dunn opened in the heart of the Chicago Loop, an area where thousands of people walk to and from work every day. “The tradeoff here is there’s less residential traffic, so we focus on maxing out lunchtime business,” he says.

Aside from a strong starting location, Gregg credits his successful opening to due diligence and an understanding of the Chicago market. “As much research and leg work you think you need to do, do 50 percent more,” he says. “There are plenty of places to find data and projections, and that information has to be reviewed before making a franchise commitment.”

Koerner’s father, John, started several successful businesses in Shelburne, Vermont, including an apparel company and bagel shop. While he was still running the bagel business he bought an open lot, thinking it would eventually make a solid site for a new venture.

Meanwhile John learned to make bread and pizza dough from local bakers, and he soon became known for hosting pizza parties with his homebuilt oven –– so well-known that he decided to open up shop. Serendipitously, he also met brewer Matt Cohen, who was looking for a property to open what is now Fiddlehead Brewery. John, Matt and Buddy tore down the lot’s original building and built a 5,000-square foot barn façade to accommodate both businesses.

From construction to training to supply lines, the father-and-son team tackled a whirlwind of logistical challenges as they opened Folino’s. “At first we just worked with family and friends, but we’ve learned more about the emotional side of leading people and gauging who’s a good candidate,” he says. “I was also surprised by how sneaky suppliers can be, and it’s really helped our bottom line to be diligent about getting the best price on every single thing we buy.”

Koerner also stresses that building up your brand is the most critical aspect of your success, and that word-of-mouth is the best form of advertising. “People trust their friends a lot more than they trust ads, and what people think about your product is 99 percent of how it will taste to them,” he adds.

David LaMartina  is a Kansas City-based freelance copywriter who specializes in the finance, food and health industries.