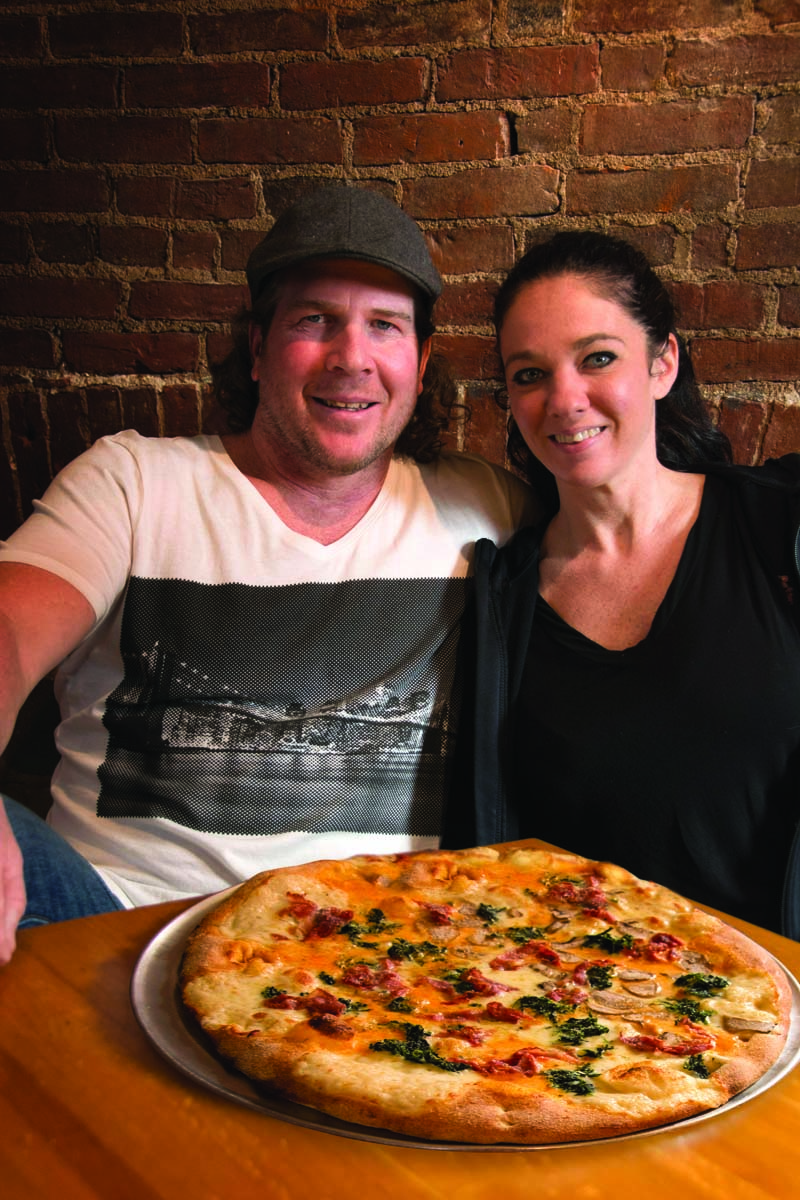 In this industry, there are two kinds of operators –– those with experience who enter the industry tentatively and those who jump in with both feet first. Christian and Mindy Strong fall into the former category. The two worked for a large regional chain in the Cincinnati area before striking out on their own three years ago. Today, Strong’s Brick Oven Pizzeria is quickly gaining attention for its friendliness, fun atmosphere and great food. When combined, the Strongs feel they’ve found their niche in Newport, Kentucky, and customers seem to agree. It’s not unusual to find folks waiting in every corner of the historic home for an open table, chatting up the owners and singing –– just the atmosphere the Strongs wanted.

Both Christian and Mindy started their restaurant careers working for a regional pizzeria, and that’s where they met. A few years later, Christian found himself helping to open a series of Smashburgers for a regional franchisee. “But you can only do so much with a chain,” Christian says. “You have to follow their rules. That’s kind of why she and I decided to –– for lack of better words –– go out and make real pizza.”

Strong’s Brick Oven Pizzeria opened three years ago. “I like to cook and I like to be close to the employees,” Christian says. “The original plan was a little place with four to five tables that we could be real close and sit and talk with people while we cook. We got pretty close with this place.”

The building was an old house and required some creativity to fashion into a working restaurant. “I think I sat here for an hour and a half thinking ‘How can we make this into a restaurant?’ And that’s when we decided to put the oven in the window so everyone can see it from the street,” Christian says.

“All we do is pizza down here. You’re not getting hoagies or wings … We just do pizza and salads here.”

Mindy adds: “We don’t ever want to veer from what we do.”

And they don’t. Both are usually on-site daily and enjoy getting flour on their hands. “We have fun down here,” Christian says as he stands beneath a spinning disco ball in front of the gas-fired oven. “Customers will crowd themselves in here any place that they can, wait an hour-and-a-half, and that just amazes me. Down here, these are just by far the best customers I’ve ever had.”

Christian recalls the time one of his cooks was making a pesto pizza, shook the sauce bottle and “some of the pesto flew over and landed on one of the customers,” he says. “The guy leans over, licks his arm and says, ‘That’s good! I think I’ll be ordering that when I sit down!’ I was like ‘Oh, man! These people are amazing!’”

And meeting customer expectations has become a priority at Strong’s. They do as much in-house as possible, including making dough, sauces and breads.

“We try to make everything that we can from scratch,” Christian says. “If you don’t, you’re kind of missing the point.”

“It makes a big difference when everything is made fresh,” Mindy says. “It’s not processed.”

The company’s top-selling pizza is the Pizza Alla Vodka (a 16-inch large is $17.45), and features a house-made vodka cream sauce, mozzarella, seasoned fresh mushrooms, spinach and prosciutto di Parma. Other specialties includes a spicy Diavolo Dolce pizza with pineapples, banana peppers and bacon and the Heavenly White Pizza with white chocolate, powdered sugar and a choice of raspberry, chocolate or caramel sauces.

“I love when people take a bite and they come up and say ‘You use good cheese. We can taste that,’” Christian says, “or I can taste those tomatoes. I can taste what you are doing here.’”

Pizzas are baked in a gas oven in the Newport store and in a combination gas/wood oven in their second store, which opened last December in nearby Hebron, Kentucky. “It’s a full service restaurant,” Mindy says, with a traditional Irish bar. An Italian restaurant with Irish beer? “We’re a little weird like that,” Christian laughs. “We’ve always wanted an Irish bar. It’s a different crowd out there, but it’s come a long way.”

Easier parking and a large percentage of established customers made it a good choice for a second location, and the Strongs have worked diligently to ingrain themselves in their new community.

The new location has a few sandwiches on the menu, but for the most part remains the same as the original spot. Both locations deliver, a component the Strongs had experience with in their prior roles with the regional pizza company. Christian even started as a delivery driver. Delivery now makes up about 25 percent of sales. “About a week before we opened, we made up and sent out about a hundred pizzas all over Cincinnati to all the receptionists that we knew,” Christian says. “All those big corporations –– the receptionists are the ones who order the food. So if they call us, all of the receptionists eat for free. We take care of them.”

Although they don’t do much marketing, a mobile trailer has proven to be an effective addition to the business. It’s a brick oven on wheels, “and we only do private events, like graduation and weddings,” Christian says. “Everyone wants to have us at their events. … It’s kind of a novelty item, but that was basically our marketing budget for the next five years.”

Completing just one private event has led to good word of mouth and further bookings –– some even months in advance.

With two stores underway, Christian has one piece of advice for new operators. “Keep it simple and enjoy it,” he says.

Having worked for a chain, “as an independent, everything you do is still the same. You control your costs. You control your labor,” Christian says. “But food is priority. We will never become production. I don’t care how busy we get. If it’s not perfect, we’re going to remake it. The one thing I’ve learned is that people are harder on the independent operators.”

If you don’t love what you do, you’re not going to be successful, the Strongs say.

“We tell people ‘take the food serious, but don’t take us serious,’” Christian says. “At the (Hebron store), I’ll stand up on the counter and recite a poem on Saturday nights when it’s too crowded, or we’ll stand up and make the entire restaurant sing Happy Birthday … When it’s crowded and little, you can’t do anything else but have fun.”