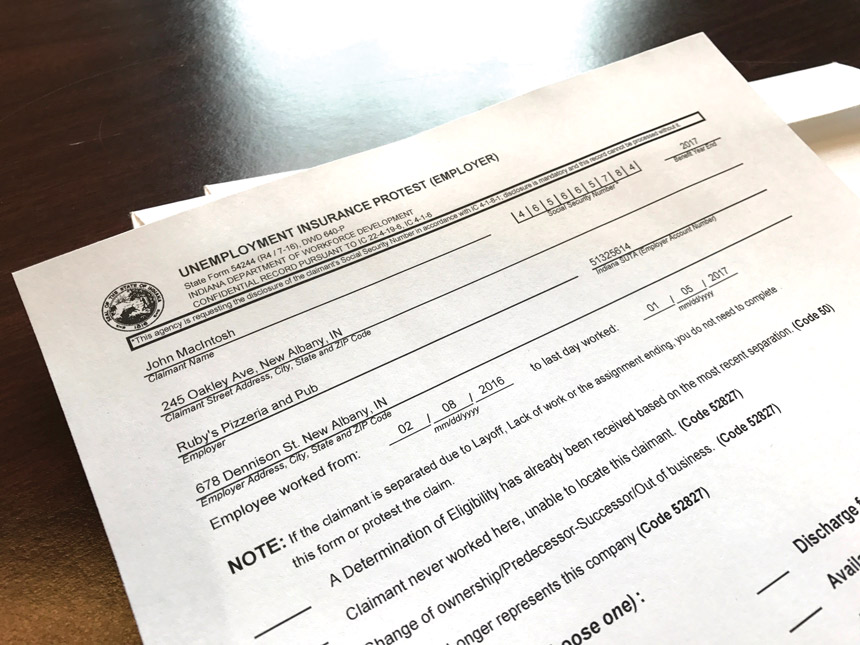 In any given week, roughly 250,000 unemployment insurance claims will be filed across the country, according to data from the U.S. Department of Labor.

And given the restaurant industry’s notoriously high turnover rate — as much as 300 percent annually by some estimates — a decent number of those claims are sure to come from ex-restaurant employees.

For restaurant leadership already facing a number of administrative headwinds from healthcare to minimum wage hikes, unemployment claims represent yet another burden on an already taxed system. And when the claims are unjustified? Well, that just adds to the frustration.

“Besides requiring you to take time out of your day to spend energy and, sometimes, money to deal with something that is not a part of your core business, unemployment claims can also cause a jump in your insurance rates,” Baltimore-based small and mid-sized business attorney Kurt Nachtman reminds.

Each time an unemployment claim is approved by the state and those benefits are paid to the employee, an employer’s experience rating — a key figure in calculating an employer’s State Unemployment Tax Account (SUTA) rate from year to year — is charged, explains Alison Cammick, a senior manager in accounting services with FrankCrum, a Florida-based professional employer organization.

“With proper claim management, an employer can help ensure unjustified claims are not approved and benefits are not paid to the former employee, thus keeping the employer’s experience rating low (and helping) to maintain or lower a company’s SUTA rate,” Cammick says.

Unemployment claims, however, can be tricky for restaurant owners to handle, especially amid the industry’s fast and often unrelenting pace and given the fact that claims are funneled through bureaucratic enterprises historically unconcerned with user friendliness.

In many states, Nachtman says, the burden of proof falls on the employer to show that the discharged employee is not entitled to benefits given repeated poor performance. Yet more, many ex-employees will still land unemployment benefits even if they are guilty of violating universally accepted workplace standards, such as repeated tardiness.

“And for a lot of employers, that is a tough pill to swallow,” Nachtman says.

Nevertheless, there are practical strategies restaurant owners can employ to minimize the damage caused by baseless unemployment claims.

Document, document, document. In any unemployment claim case, particularly unjustified ones, documentation is critical and will help ownership make a strong case as to why a former employee is not entitled to benefits. Owners should have an employee file that includes key documentation such as timesheets and a signed paper acknowledging that the employee received the staff handbook, which proves that the employee was made aware of operational guidelines, safety procedures and the like.

Many cases, Cammick says, have been won or lost based on an employer’s ability to provide a copy of the company handbook that defines specific company policy as well as the employee’s signed acknowledgment of said handbook.

Other important documentation includes written warnings signed by the employee acknowledging receipt of the warnings (or a note from the employee that he or she refuses to sign the warning), a documented performance improvement plan or a copy of a signed resignation letter if the employee voluntarily quit. While employees often feel that signing a warning serves as an admission of guilt, Cammick says employers are more likely to gain cooperation by positioning their signature request as confirmation that a conversation about an incident took place.

If an employee violates work standards or is involved in an incident that could, if repeated, lead to termination, management might also e-mail themselves notes as to what happened.

If a claim is filed, craft a comprehensive response. Cammick suggests any small business owner confronted with an unemployment claim set aside time to create a complete, accurate and thorough response. Answer all questions on the claim and leave no doubts as to what prompted the employee’s termination. Owners might also include any background information or employee paperwork that will help ensure that the state does not award benefits to an employee unjustly.

“This not only ensures the state will not find your response incomplete, but it has the added benefit of avoiding a phone call from a state adjudicator requesting additional information,” Cammick says, adding that it’s also important owners meet stated deadlines. “If a claim is not responded to in a timely manner, then a restaurant owner could lose all future appeal rights to the claim.”

While completing unemployment documents can sometimes be confusing, Cammick reminds that every state has an employer hotline from which owners can solicit specific guidance.

Be a pro. Firing someone for cause and then having that former employee attempt to collect unemployment benefits can be upsetting, Cammick acknowledges, but owners must maintain their composure at every turn. While it’s not uncommon for an owner to speak candidly, loudly and perhaps profanely to a state agent about an employee’s termination, she urges owners to “stay cool, calm and collected.”

“The best thing you can do to minimize unemployment claims is to hire better employees and provide them a respectful work environment,” small business attorney Kurt Nachtman says.

“If you fire someone without reason, understand that they will likely be entitled to unemployment benefits,” Nachtman reminds.