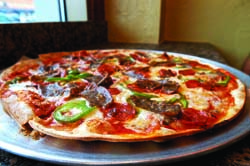 For some of us, achieving a crispy crust pizza is like chasing down that legendary Golden Fleece, but it really doesn’t have to be such a massive undertaking. Below are some tips to get you on your way:

Tip No. 2: Fermentation has a great influence on crispiness due to the softening effect that it has on the dough. The softer, more relaxed, dough consistency allows for improved expansion properties of the dough during baking, resulting in a more open, porous internal structure within the crust. This open structure effectively inhibits heat transfer through the crust, allowing the surface of the crust to reach a higher temperature during baking, thus creating a crispier finished crust.

Tip No. 3: The amount of water added to the dough can have a significant effect on the crispiness of the finished crust, but not in the way you might think. It’s actually the addition of more water to the dough that helps to create the conditions for a crispier finished crust. The water will make the dough somewhat softer, allowing it to more freely expand during those critical first few seconds of baking. This creates the desirable, open crumb structure that effectively blocks some of the heat transfer through the dough and allows for a better bottom bake (ultimately leading to a crispier finished crust).

Tip No. 5: Incorrect dough management procedures can also affect crust crispiness for reasons similar to those cited in Tip No. 4 above. For example, if the dough is allowed to ferment at room temperature for any significant amount of time prior to taking it to the cooler after mixing, the dough will begin to ferment, making it less dense, more open and porous. In essence, the dough becomes more difficult to cool down in the cooler, leading to over-proofed dough balls in the box. 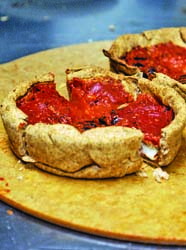 A similar problem can develop if we bypass the important cross-stacking step when putting the dough up in the cooler. The cross stacking of the dough boxes allows heat to freely escape from the dough, resulting in effective and consistent cooling of the dough. If the dough boxes are not cross-stacked, the heat is trapped within the dough boxes. Since yeast is a living organism, it produces heat (heat of metabolism) as it metabolizes nutrients and ferments. This, too, will result in dough balls that are either grown together, blown or just wet and sticky on the following days. Assuming we’re baking in the right type of oven, on the right type and color of pan or disk (if used), and the baking time and temperature are within reason, these tips might provide just the ticket to getting the crispy crust we’ve been looking for. You might note that many of the tips seem to have a common denominator — that is to allow the dough to rise slightly (oven spring) during the first few seconds of baking, which helps to establish an open, porous crumb structure within the dough/crust, thus preventing excessive heat transfer through the dough. This allows for more of the bottom bake to go into baking and drying the bottom of the dough, ultimately resulting in a crispier finished crust. Don’t worry about the top of the pizza not getting sufficiently done when you block some of the heat from the bottom of the oven. The top heat of the oven will handle the top of the pizza just fine. But if you should find a problem, it is easily corrected by either increasing the oven temperature or extending the baking time slightly. ?