Stop 50 Wood Fired Pizza, an Indiana independent pizzeria that’s just over the border from Chicago, has a smart, eclectic wine list. There’s a rare Pinot Noir from northern Italy, a plush Amarone, a Spanish rosé. And then there’s a Riesling from — wait, Michigan?

That isn’t as strange as it might seem. Over the last decade, the United States has become a nation of winemakers. A state like Iowa, famous for corn, soybeans and hogs, now boasts a breathtaking 70 wineries. South Dakota and even North Dakota have wineries. Texas, a state where priests were planting grapes more than 300 years ago, produces renowned bottles from the hill country outside of Austin. In fact, there are now wineries in all 50 states  yes, that includes Alaska  and their ranks are growing rapidly. And compared to Alaska, Michigan seems like a perfect place to plant a few vineyards

At Stop 50, owner Chris Bardol isn’t stopping at a token Midwestern wine. In addition to Round Barn Winery’s riesling, which is made just a half-hour up the road, Bardol is adding a couple more Michigan wines and tasting bottles from Indiana and Ohio, too. “It’s at the beginning stages,” Bardol says of his local wine selection. It’s a natural project for him: Stop 50 prides itself on buying locally and not carrying mass-market brands. “We don’t do any large domestic breweries, so we wanted to carry that same thought process into the wine.”

And local wines aren’t languishing on the menu anymore, says Round Barn’s general manager, Chris Moersch. “It used to be like pulling teeth to get our wines into accounts,” he says. “That’s totally changed.” In fact, Round Barn’s wines are now in more than 150 restaurants. In part, as Moersch says, the shift is generational: “Twenty- and thirty-year-olds are much more open to local products. They like to make up their own mind.” But the way people think about wine has evolved, too, and as more Americans drink wine, the quality of regional wines has shot upwards.

At Pizzeria and Bar Bianco, a place that draws pizza cognoscenti from across the country, owner Chris Bianco stocks local Arizona wines. In fact, says Rod Keeling, president of the Arizona Wine Growers Association, Bianco’s such a believer in Arizona wine that he even testified before a legislative committee in support of local wineries.

“People will even try a wine or a beer because it is local,” says Bardol. “It’s actually an advantage.” The success of local beer  craft beer from local breweries is now seen as a prestige product over beer from national breweries  has made local wine seem less strange and more legitimate. And for pizzerias in tourist areas, local wines have an obvious selling point, Bardol says. “If they’re just in town for a little bit, where else are they going to see it?”

It’s tough to get more local than the half-dozen bottle list at Redwood Pizzeria in Felton, California, in the hills above Santa Cruz. Ask owner Evan Borthwick where his wines come from, and he says things like, “It’s up on the top of the ridge,” or “That’s literally a stone’s throw from the pizzeria.” All Redwood’s wines come from within a few miles of the pizzeria. That’s an extraordinary situation, but any pizzeria near a winemaking area would do well to emulate Borthwick’s model. He’s successfully cross-promoted Redwood through the local winery tasting rooms, winery associations and brochures. When the owner of a winery recommends Redwood for a pizza and a glass of his wine, that recommendation means actual business, Borthwick says. He’ll post flyers for special events at the wineries and they return the favor. It’s a deal that not only brings in customers, but reinforces Redwood’s brand as a local and organic business.

Getting wine is exceptionally easy for Borthwick. “I’ll call on a day’s notice when I’m down to the last bottle of Chardonnay, say,” he says, “and the wine maker will drop off the wine himself,” saving him shipping costs and cutting carbon emissions. That’s unusual, of course. But in many states, wineries can sell directly to restaurants instead of going through a distributor (which interstate sales typically require). That’s an opportunity to develop a relationship with a fledgling winery, which may cut its prices in order to get into a restaurant. Winter’s an especially good time to contact a local winery — that’s their slow season.

But if you go through a distributor, you may have to push to get access to local wines: distributors are used to selling mass-produced corporate wines. Also, Bardol says he typically pays a little more for local wines because he’s ordering in small quantities. “What I have to look at is how I’m going to price it to be competitive on the menu,” he says. Nevertheless, the Round Barn Riesling lands at the low end of the list, coming in at $5 a glass and under $20 a bottle. And even if he had to pay more, Bardol says, he’d do it, because that’s what customers expect from Stop 50: something surprising, local, and good. “It’s worth it to not have the big brand names,” he says. ? 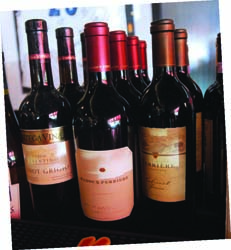 Many American regional wineries grow standard European wine grapes like merlot or Chardonnay. But Midwestern or Southern wineries often grow less-familiar hybrid grapes like Chambourcin or Vidal because the European varieties don’t do well in extreme climates. Don’t dismiss them: they can be excellent. Here’s a primer on a few lesser-known winemaking states:

? New York. The North Fork, with its Bordeaux-like weather, is home to many stellar wineries, specializing in world-class Merlot and Cabernet Franc.

? Virginia. Thomas Jefferson once planted grapes at Monticello. Today he has many imitators. Look for lush Viognier or the local grape Norton.

? Michigan. Perhaps the most underrated wines in the country, Michigan’s best, especially its German-styled whites, can compete against almost any from the West Coast.

? Florida. Look for sweet wines from hotweather- loving hybridized grapes. And keep an eye out for dessert fruit wines, too.

Nicholas Day is a freelance writer who covers food and drink for a variety of publications. He resides in New Haven, Connecticut.

Meatball Mangia Offer spaghetti and meatballs? If you’re not making a meatball sub or using your meatballs on pizza, you could be missing out on profi ts. Consider using French or Italian bread. Sliced lengthwise, add the meatballs, layer with mari

Eric Koslowski, owner of Primanti Bros. in Fort Lauderdale, Florida, doesn’t seem to be taking the recession lying down. When opportunity knocked, he answered in a big way. Koslowski recently opened a 4,700-square-foot store by negotiating with the
Posts

74 percent of pizzerias have dining rooms. The pizza industry will top $38 billion in sales in 2010. International Pizza Wxpo 2010 is scheduled for March 2-4 at the Las Vegas Convention Center Tennessee has 1,184 pizzerias The Pizza Kitchen / Scalini