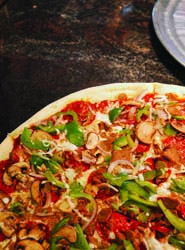 Brothers Amir and Ali Arab have been in the pizza business a long time. Though they didn’t exactly enter the circle of pizzeria owners by choice, they couldn’t imagine any other career these days.

When the Arabs graduated from college in the 1970s, tensions between America and their native Iran were high. As was discrimination. The Arab brothers had difficulty finding gainful employment, and they eventually had to go to work in the foodservice sector to make a living. It wasn’t long, however, before Amir felt like he was ready to open his own shop in Nashville. So, in 1983, Pizza Perfect was born on Granny White Pike. Then, in 1990, Amir opened a second location at 21st Avenue South, near Vanderbilt University. While the original Pizza Perfect store is no longer in operation, a new parlor in nearby Bellevue is open and houses a large laser-tag area above the pizzeria. It was quite an investment for the Arab brothers.

“We just opened the laser tag area, so it’s too early yet to tell how well it’s going to do,” confides Amir. “But we think it’s going to be busy and take off.” It better. The construction costs doubled thanks to a visit from the local Fire Marshal.

“It’s a 12,000 square-foot-building that we own,” says Amir. “We lease out half of it, and the rest is dedicated to Pizza Perfect. The laser tag section is around 2,300 square feet. We had planned on it costing $120,000 for that originally, but it turned into a $240,000 investment because we had to install a sprinkler system throughout the entire building.” 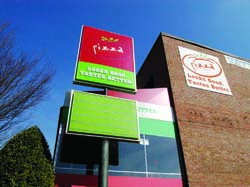 Since the Bellevue shop is in a neighborhood, Amir says it has been hit hard by the current recession. “It’s down about 20 percent right now,” he says. “This store (the Vanderbilt unit) is only down five percent. (The recession) has hit us pretty bad. But what we’ve done to counter that is to actually improve the quality instead of take away from it. Times like these, the last thing you ever want to do is compromise your quality.”

Sage advice indeed. And lest you think Pizza Perfect’s short downturn dropped revenue into the gutter, think again: the two stores combine for about $2 million in gross sales. 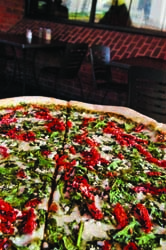 More than anything else, the flagship store at 21st Avenue South in Nashville has benefited from great site selection. Not only is it across from Vanderbilt, but it also sits close to a major hospital and a stone’s throw away from many music industry players. 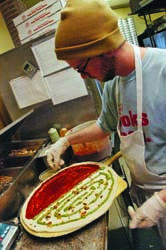 Before opening, says Ali, the brothers “went to New York ourselves and ate a lot of pizza by the slice and watched how people made it. We wanted to taste it and check it out.”

Pizza by the slice is a real driver for Pizza Perfect, particularly at lunch. “We do sell a lot of whole pies, too,” says Amir, “but a lot of people love slices for the convenience and value. We put out a lot of pizzas here because of that. I only have two ovens (at the Vandy operation), but I’m putting $1.4 million a year out of these ovens.” 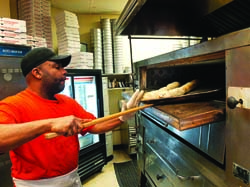 Lunch accounts for a whopping 45 percent of sales at the Vanderbilt location. Because of that, the ticket average ($7) is significantly lower than the Bellevue store ($15), which is fancier and does more dinner business.

“We get so packed in here at lunch from Mondays through Fridays,” says Ali. Food costs run about 33 percent. Amir acknowledges that number isn’t ideal, but says there’s a reason for it. 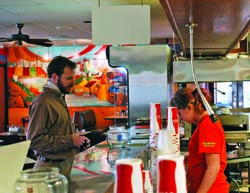 “Yes, our food costs are high, but our food waste is low,” he explains. “It’s because we buy high quality ingredients and we haven’t raised our prices for a while. We did raise them about five percent 18 months ago, but then things went crazy with the cost of fl our and cheese and gas, so the price increase really never caught up to us.”

While the prices of those items have fallen back in line, the potential benefits of that have since been offset by the shrinking U.S. economy. Amir has weathered a handful of recessions since opening Pizza Perfect, but says the current one will go down in history.

“This is the worst one,” he says. “The main thing we have been doing is just going back to the basics. Pizza is still the best place for your money. We offer more than cheap eats — we provide good food at reasonable prices.”

The Arabs have also turned to their vendors for assistance where applicable. “One of the things I’m doing is asking my suppliers for help, stressing that now is the time to help us,” he says. “The economy is really hurting us, but with us, like I said, it’s about getting back to the basics: making sure you have a clean restaurant and offer good quality and service. It’s important to remember that value doesn’t necessarily mean cheaper. That’s what’s going to help us out.”