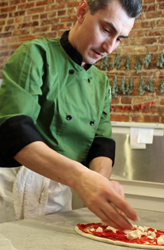 Established in 1994, Cornerstone Pizza is owned and operated by my partner, Dave Shearn, and me. Cornerstone is a small delco shop that specializes in pan-baked pizza. On December 28, 2010, I received a call from a customer at the Philadelphia airport. She said, “How fast can you get 50 pizzas to the airport? Can you get them by 2 p.m.?”

Mind you, it was 1 p.m. I asked if she could give me until 2:30, and she agreed. Still, it was going to be a tall task. I began by entering the order in our system when she requested: “We need another 100 pizzas around 6:30 tonight.” As soon as I hung up the phone, we began to rip out 50 pizzas. Our manager, Keith Allen, called in off-duty employees. That initial order of 50 was delivered on time, as promised. But getting the next 100 pizza order out on time was going to be a challenge since we had to get new dough ready for same-day use.

Once we made the dough, we allowed it to rest at room temperature for a few hours (covered, of course) to speed up the proofing time. Then, we sheeted it into the pans and gave it 60 to 90 minutes to further proof before baking. With our crew coming in earlier than usual, we were functioning like a well-oiled machine. But more orders were pouring in due to a rescheduled NFL game. I assisted with the delivery at 6:30 p.m. to express our appreciation. To my surprise, she wanted another 300 pizzas delivered the next day: 150 at 10 a.m., 150 at 6:30 p.m.

While I was excited about the orders, we had a problem: it was 7 p.m., and we had gone through all the flour in the shop. We had an order coming in on Wednesday, but not before noon. We called another pizza shop in town and they were gracious enough to lend us three bags of flour. In the meantime, I called our food supplier sales rep at 8 p.m. to explain that we needed product ASAP the next morning. His response showed me just how dedicated he is to good customer service. Not only did he say, “No problem,” but he went to the plant first thing in the morning and filled his personal vehicle with flour, sauce and cheese. He dropped it off at 9 a.m. Wednesday morning.

On Tuesday night, a couple of us stayed into the wee hours prepping for Wednesday. I returned at 5 a.m. to find one of my valued employees, Kamal, still there making sauce and prepping various items for Wednesday’s normal business. He had been there since 1 p.m. Tuesday. The morning order of 150 pizzas went out without a hitch. Then, around noon, our customer stopped in at the shop and asked to add 30 pizzas to the evening order of 150. She also asked us to repeat both orders again Thursday — 150 pizzas at 10 a.m., 180 at 6:30 p.m.

Again, distributors replenished our supplies. We even had to fill blanks in the inventory at the grocery store. With much help from our cooks and delivery drivers, we successfully completed all the orders. Believe me, it took some managerial juggling to make sure our regular business was not neglected. Our entire crew stepped up big-time. They worked extra hours, they came in early, they stayed late … you name it.

Local newspapers and our ABC affiliate covered our big order, which resulted in Cornerstone receiving a lot of good publicity. You can find the stories at our Web site, www.cornerstonepizza.com.

As I wrote this column two months later, we were still experiencing quite an upswing in business as a result of the publicity we received. It has been quite a ride.

My Turn is a monthly guest column. This installment is written by James Villas, founder of Cornerstone Pizza. If you are interested in submitting your own column, e-mail Jeremy White [jwhite@www.pizzatoday.com] and let him know what you want to say and what qualifies you to say it!