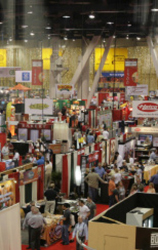 A Little Caesars with no connection to Detroit will be represented at Pizza Expo 2013 by its gregarious owner, Theo Kalogeracos. He’ll be flying in all the way from Perth, Australia, where the three restaurants he owns under the name Little Caesars Pizzeria are popular upscale eateries.

Theo was the 2010 Pizza Maker of the Year in the International Pizza Challenge, held annually at the Expo. He qualified for the finals that year by winning the Non-Traditional Division with one of his dessert pizza creations.

At Expo 2012, next March 19-21, he will demonstrate dessert pizza-making on the Demonstration Stage in the Exhibit Hall. Theo will also compete in the “Best of the Best” blind-box bake-off during next year’s show.

For an entertaining look at Little Caesars in Perth, watch the video below. The pies sure look good in the land down under.

Visit PizzaExpo.com to learn more about next year’s show.

To view a full schedule at a glance, click here.

International Pizza Expo® 2013, scheduled for March 19-21 at the Las Vegas Convention Center, is the oldest and largest annual gathering of pizza professionals—and will draw approximately 7,000 attendees and 450 exhibitors to a show floor covering an area equal to 5½ football fields. In its 29th year, Pizza Expo attracts top independent and chain operators to do business in the exhibit hall, attend education sessions and take part in pizza-making competitions.