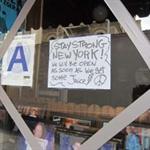 Lower Manhattan is a ghost town. Century-old trees are uprooted, the world’s most incredible public transportation system has ground to a halt and power is out — not just in some buildings, but everywhere south of 28th Street. As I write this, New York is just days removed from the landfall of Hurricane Sandy. Most residents and businesses have remained closed, but several pizzerias have figured out how to keep the lights on both literally and figuratively.

The first challenge for powerless pizzerias is how to make dough without a working mixer. Some went back in time and whipped up batches by hand. A beautiful photo quickly made the rounds on Twitter of Motorino’s Mathieu Palombino, hands deep in a flour trench filled with yeast-clouded water. Employees at Pizza Box on Bleecker Street were proud of their handmade dough, especially because they had never attempted it over decades of pizza making.

Others were fortunate enough to have access to kitchens in electrified parts of the city. I saw Roberto Caporuscio getting out of a taxi with two bags of vegetables and a stack of dough trays. He was transporting supplies from the refrigerator at Don Antonio in the Theater District to his powerless Greenwich Village pizzeria, Keste. A similar task was necessary for Forcella’s Giulio Adriani, who carted dough from his location in Brooklyn to the one in Manhattan. Newcomer Cowboy Pizza in the Lower East Side made trips to Long Island for access to a working mixer at a friend’s pizzeria, even though road and bridge closures made the drive interminable.

Even with mixed dough in hand, the problem of storing it without refrigeration remained. The storm brought a cold front to New York so overnight temperatures are low enough for dough trays to be stored outside. Pizza makers had to tweak their dough formulas to compensate for slightly warmer ambient temperature but I found the slightly softer crust texture to be a welcome change.

Heating ovens is no challenge for pizzerias whose central piece of equipment is fueled by wood, coal or natural gas, but operating them safely with minimal light is another story. Joe’s in Greenwich Village created a system of flashlights taped to poles to provide oven lighting. Percy’s lit its tiny counter by candlelight. Lombardi’s probably had the most complex setup, with a series of car batteries powering lights in the kitchen, dining room and even a couple for the sign outside. Most pizzerias are avoiding the lighting issue altogether by restricting service to take-out and delivery.

No matter what obstacles are placed before them, these pizzerias found solutions. Beyond just being a business, you’re part of a community that depends on you for comfort food in times of need. Seeing how these pizzerias have gone out of their way to serve their neighbors has been a great testament to the resilience and dependability of the pizza industry. Just think about what you would do in an emergency situation so people like me can turn to you for the comfort of a warm slice.u