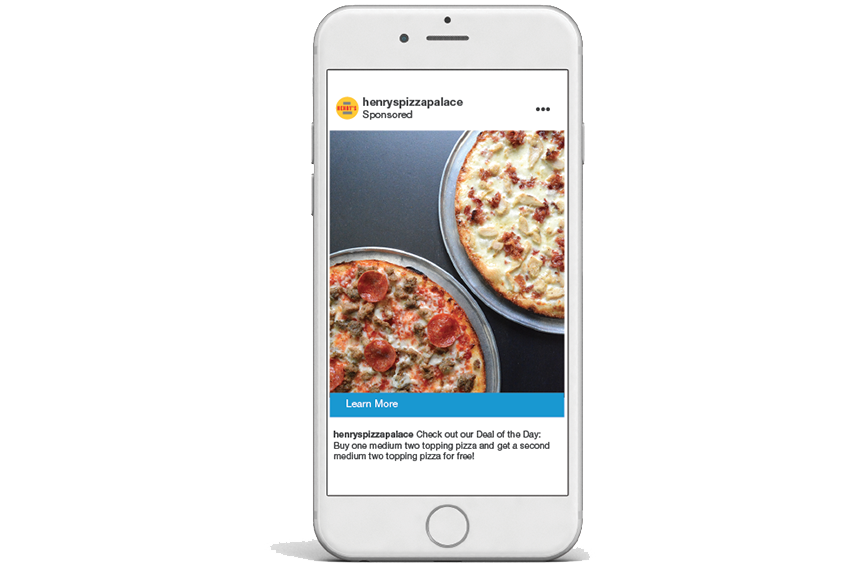 With 28 Rapid Fired Pizza units under his charge and battling an increasingly competitive environment, Ray Wiley isn’t taking any chances.

“Nowadays,” Wiley begins, “you have to market everywhere and anywhere you can.”

As a result, Rapid Fired’s marketing budget includes a diverse array of efforts designed to capture the eyeballs of retail customers as well as prospective franchisees.

“Social media advertising is a good bang-for-the-buck way for us to reach customers and franchise partners, so many of whom are active on social media,” says Wiley, a veteran restaurateur who founded the Ohio-based Rapid Fired concept in 2015.

That’s a savvy play, says Ashley Thiesen, CEO of The Modern Connection, a social media and digital marketing firm headquartered in Charleston, South Carolina. With organic reach on the decline for nearly all major social platforms, a paid social budget working alongside an existing content marketing strategy better positions a restaurant’s social media content to attract the eyeballs it seeks.

“It’s no longer an option to post to your social pages and just assume your followers will see it,” Thiesen says. “You have to pay to play.”

“And, thanks to the targeting capabilities on social media, you can reach [your targets] with pinpoint accuracy,” he adds.

“This allows the restaurant to make the most of their advertising budget and move forward with confidence,” Liu says.

“Facebook for Business has amazing free resources, and if you have the time and patience to teach yourself, that’s a great place to begin,” she says, noting that Instagram ads’ integration within the Facebook Ads Manager allows restaurants to rather seamlessly extend their advertising reach on two key platforms.

In addition, Facebook’s vast user base and versatility generally produces a favorable return on investment, though results will swing based on a restaurant’s target audience and approach.

“Our experience has been that Facebook drives the most conversions at the lowest cost per conversion,” Liu says.

While some tactics will prove more expensive than others, the costs associated with the advertising bids vary week to week due to an algorithm rooted in real-time Facebook and Instagram users.

“The best way to identify a budget is to build out your audience, creative assets and campaign and then identify the bid range, keeping in mind it updates every seven days,” Thiesen says, adding that a more targeted audience doesn’t necessarily translate into higher rates.

2: Know the ground rules. Liu advises restaurants to familiarize themselves with a given advertising platform, its options and its pertinent details. For instance, are costs associated with clicks or impressions? What’s the campaign’s run time? When will charges occur?

“Understanding these parameters and then keeping a close eye on your campaigns is key to avoiding surprising charges,” Liu says.

3: Pay for the “right” play. Particularly for beginners, Thiesen suggests restaurants use the cost-per-click model rather than the cost-per-impression option. This way, a restaurant only pays when people engage with an ad.

4: Identify the target. Avoid default targeting, Thiesen says, and instead specify audience, which can be based on geolocation, gender, age, income, parental status, marital status and interests. Then, craft content – video as well as text and imagery – as precisely as possible.

“For example, if you want to promote your new pet-friendly patio, use images of dogs in your ads and target pet owners who live nearby,” Thiesen says.

Other potential targets might include happy hour specials for nearby workers, game-day promotions for fans of a particular team or family-friendly events aimed at parents.

5: Consider the customer. Much too often, restaurant owners push what makes them excited with nary a concern for what the customer cares about or how the restaurant can address an existing customer need. “Put yourself in your customers’ shoes,” Liu directs.

6: Don’t yo-yo. Wiley acknowledges that social media advertising can be “very temperamental” with factors like weather or national news impacting results. Even so, it’s important operators commit to an overall strategy, including timeline and budget, and resist the temptation to change campaigns in a willy-nilly fashion.

“Give your strategy time to work and also to deliver enough data so you can figure out what is working and what isn’t,” Liu says.

7: Measure constantly and adjust accordingly. Timely data is one of digital advertising’s premier advantages, so use it. Dig into the numbers to see if certain copy, images, promotions, descriptions or targeting parameters are resonating more than others. Then, pivot accordingly.

“Measure everything you do so you can figure out if your assumptions were correct,” Liu says.

8: Defer to the pros. If no one in the business is willing to do the research to master paid social media ads, then hire an outside expert.