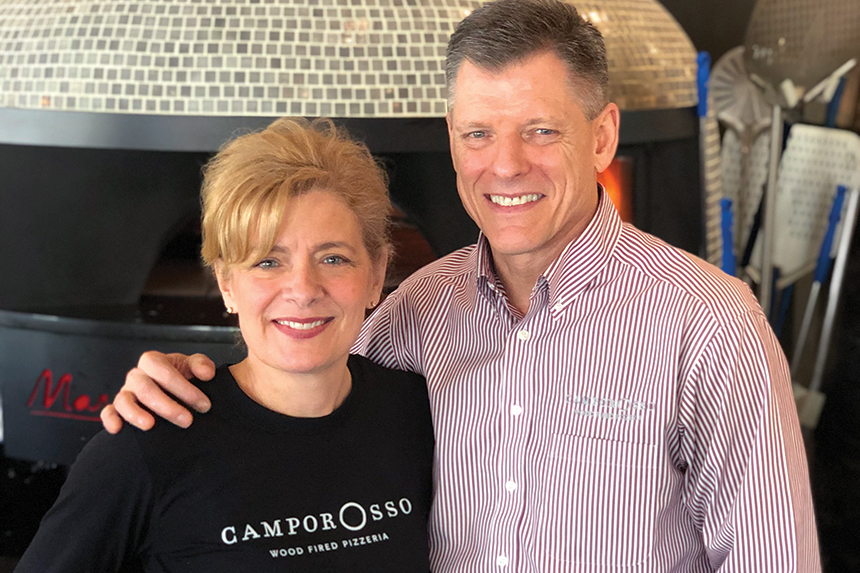 Eric and Amy Redfield build their dream pizzeria based on service

To stand in front of Camporosso on a busy stretch of Dixie Highway in Fort Mitchell, Kentucky, a stone’s throw from downtown Cincinnati, it’s hard to imagine its previous life as a dilapidated 1920s-era gas station. But you can still see the character of the bygone garage in the upscale, wood-fired pizzeria. That’s just what owners Eric and Amy Redfield envisioned when they renovated the space and opened Camporosso in 2017.

Camporosso (“red field” in Italian) pays homage to its automotive roots throughout the restaurant, while also presenting an elegant space. It features a long L-shaped Italian marble bar, intimate lighting, wooden tables and chairs, and large, comfortable booths with seating inside for 110 (and another 35 under a covered patio where gas pumps once stood). An open kitchen showcases a revolving, wood-fired dome oven and a three-tiered deck oven along with its makeline and bar.

For the Redfields, Camporosso is their dream retirement. “Amy and I retired from the corporate world and opened Camporosso as a platform to serve, help and give back,” he says. “In developing the brand, we recognized a market void for a community-oriented, upscale casual pizzeria — a place where people can gather to celebrate life events or just get away and relax — a place we would like to hang out at.”

The suburban pizzeria has quickly made a name for itself in its regional pizza scene. From day one, Camporosso has captured the interest of its northern Kentucky and Cincinnati communities for its pizza, dining experience and service to the community.

Service is not only an attribute of the pizzeria, it’s the guiding principle.

“We are very active in the local community and draw a definite distinction between community involvement (schools, churches, civic organizations, etc.) and the call to serve others. Both are the right thing to do, but one helps the business and one helps others. We live by Phillippians 2:4, ‘Look not only to your own interest, but also to the interest of others.’”

Camporosso’s early success had little with luck or good fortune and more to do with laying out a plan centered on community and a high-quality product, then executing it flawlessly. Eric and Amy’s dream of opening a restaurant manifested long before the couple retired from corporate jobs. “I had been making mental notes for the last 20 years,” Eric says. “Seven years ago, I thought, ‘let me put pen to paper. Let me see if we can make this work.’ After all was said and done, he had created a nearly 300-page personal plan that included a positioning statement, naming statement, commercialization process, pro forma, etc.

“We put our corporate hats on and drove through it,” he says. “We would be each other’s voice of reason and we would bounce things off of each other and then we would take it out to other people we trusted and say, ‘what do you think about this?’”

Having no experience in pizza, the Redfields’ took a knowledge-based approach to starting their business, soaking in as much as they could through Pizza Expo and industry experts. “Over the past five years my wife and I have been to training at Tony Gemignani’s International School of Pizza, VPN with Peppe Miele and The Roman Pizza Academy with Massimilano Saieva,” he says. “Not everyone can afford this approach. We allocate assets annually, and space it out. We considered it as an investment in the business that pays dividends and allows us to do the work we feel called to do.”

The husband and wife team even bought a mobile oven, parked it in their driveway and began serving Neapolitan pizza to their neighbors, kids’ friends, church groups and seniors with positive response.

When Pizza Today visited Camporosso in February, it was evident that the knowledge-based approach has paid off. Hearing Eric detail the operation and the quality and intricacy of its products, you would think he has been in the pizza business his whole life.

Today, the dine-in pizzeria generates nearly $1.43 million in annual sales, all without carryout, delivery or catering business. It’s an incredible feat when you also factor in that the pizzeria is open five and a half days, closes midday (3 p.m.-5 p.m.) and has a zero-dollar advertising budget.Instead, Camporosso concentrates on its dine-in patrons.

While studying classic pizzas, the couple was often advised to go with a classic Neapolitan-style menu, but Eric knew his greater Cincinnati community. “Our no. 1 pizza to this day is pepperoni and sausage,” he says. “You have to know your demographic and your market.”

Admittedly a perfectionist, Eric continually evaluates the products Camporosso serves, ensuring they are being effectively executed. While customers have devoured the new Roman-style pizza as a special, Eric isn’t ready to add it to the regular menu until he is completely satisfied with it.

One of Camporosso’s two walk-in refrigerators is dedicated to pizza dough and is kept at a slightly higher temperature. There’s no fryer or freezer, except a small gelato freezer that stores an exclusive bourbon ball gelato.

Eric says pasta sales continue to grow and now represent 25 percent of sales. The sheer volume of spaghetti and meatballs Camporosso sells, Eric says, makes it impossible to make spaghetti in house. Instead, other house-made pastas are featured on its specials menu. They often sell out, along with risotto balls and a house-made chicken Parmesan with fresh, local Amish chicken. A recent house-made pasta special was the Chicken and Gnocchi served in a creamy Gorgonzola sauce.

A diverse bar program makes up 25 percent of sales. A popular bourbon slushy is accompanied by a handful of craft cocktails. Six of eight taps are dedicated to beer from local breweries. The wine list concentrates on Italian varieties that people can’t find in the local grocery stores.

Key to the pizzeria’s consistent success is a 28-member team who executes a 90-percent scratch menu, including its mozzarella.

With labor shortages in the region, Eric is constantly looking for ways to streamline his operation and simplify training. Just a year and a half after opening, he made an unanticipated decision to change his original dome oven for a revolving model. “It wasn’t so much the through-put, it was training bakers,” he says. “It’s easier to train bakers on an oven that has this level of automation.”

Even amidst labor shortages, Camporosso has very low turnover. Many on the team have been there since day one. The Redfields have made their employees the top priority.

“When I did our business plan our No. 1 core value in our business plan was employee satisfaction — not customer satisfaction, not the food,” he says. “Because if you have employees that are invested and like working here and love what they do, it shows through at the table. It shows through with the finished product. We pay them well. We treat them well. It really is a family environment and that is important to us. That goes back to the service, as well. If we can touch somebody’s lives here, that’s important to us. We have a 401K so I wanted to have the opportunity to attract people who want to stay here for a while or save for a kid’s education.”

As Camporosso passes the two-year mark, Eric says they are very satisfied and content. But adds this caveat:“Being content and satisfied doesn’t mean that you are not motivated and driven to continue to improve.”