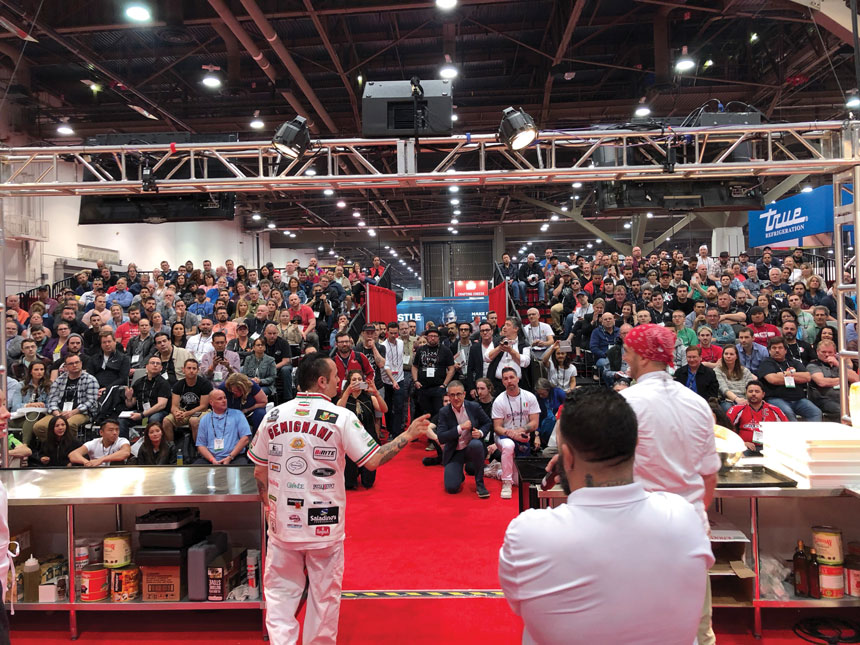 I feel like a broken record saying this, but Pizza Expo just keeps getting better. The energy in Las Vegas was incredible, with a diverse mix of demos, exhibitors, seminars and special events. It was the largest turnout in terms of both attendance and exhibitors since the show started 35 years ago. Even more interesting than the overall growth are the ways in which the industry is expanding.

The big phrase that struck me this year was “plant-based.” This is quickly becoming the term of choice for products that mimic meats and cheeses without actually using animal products. In the past we’ve seen it expressed as “animal free” or “vegan,” which sound the same but have different connotations. Veganism is a lifestyle that centers on the denunciation of all forms of animal cruelty and abuse. The term reaches far deeper than simply noting that a product doesn’t have animal components. Saying that something is plant-based is clearer in identifying what IS present than a mere indication of what IS NOT present. Sometimes it’s for political reasons and sometimes it’s all about health, but either way the term “plant-based” seems to be the phrase of the moment.

While the exhibition hall didn’t open until the Tuesday of Expo Week, tons of people showed up early for New Operator Monday. The seminars and classes are all geared toward those new to the business. Each of the seminars offered that day were packed with upwards of 300 people. John Arena, instructor and co-founder of Las Vegas’s Metro Pizza, commented that he has never met so many people at Expo who had yet to open their pizzerias. It’s exciting to see so many new faces entering the business, but that should also be seen as a wake-up call for the old-timers who are resting on their laurels. These new folks are hungry, and they’re willing to do the work required to win business.

The past few years have shown heavy interest in approaching pizza dough from the perspective of artisan bread, and that truly crystalized with the introduction of the International Artisan Bakery Expo. Pizza Expo attendees were provided open access to ingredient samples, equipment showcases and a demo stage geared toward artisan baking technique. Back at Pizza Expo, Scottie Rivera gave a great talk about using a sourdough starter at his small slice shop in Portland, while just down the hall James Beard award-winning author Peter Reinhart led a panel that discussed how to coax maximum flavor from flour using commercial yeast. Pizza may be covered with sauce and cheese, but at Expo it’s the dough that’s conceptually on top.

Beyond all the top-line offerings at Pizza Expo, the trend that most excited me was something I noticed happening among attendees. Everybody was exchanging swag. There were the usual stickers, pins and shirts. I even saw a few beer koozies. But forget all those; this year was all about HATS! That’s right; pizzeria hats are the new big thing. I blame the inimitable Paulie Gee, of Paulie Gee’s and Paulie Gee’s Slice Shop in Greenpoint, Brooklyn. He’s been collecting pizzeria hats for years and recently launched an Instagram account to catalog them all. Paulie has a policy in his restaurants that encourages employees to wear swag from other pizzerias and forbids them from wearing Paulie Gee’s logos. It’s a decision that speaks to the undeniable camaraderie that has swiftly replaced the secrets and grudges connoted by the pizza industry of the past.

It’s no longer merely acceptable for competitors to support one another; it has actually become cool. In the end, I think that’s what’s so special about Pizza Expo. It’s a place for mutual support and community. We may be an industry of independents, but that doesn’t mean we’re alone.