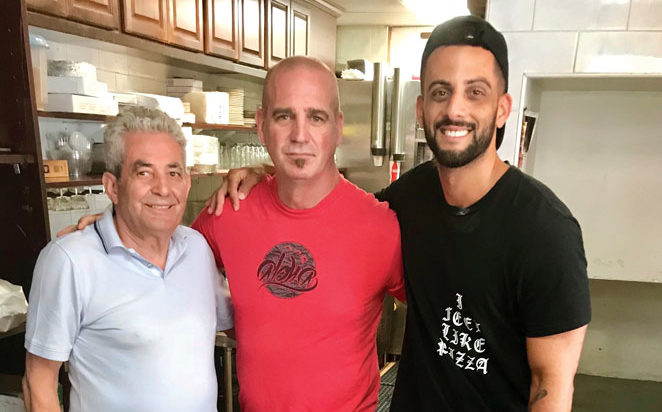 Last month I told you about how I traveled from Hawaii to Long Island to see how a multi-generational pizzeria maintains relevance and still thrives despite the passing of time.

My three days with the King Umberto’s family was amazing, and they went out of their way to accommodate me (even picking me up at the train station each morning and returning me in the afternoon). They made me feel like family and feel that they were genuinely interested in helping me along in my pizza journey. I was reminded to “stay in touch” and “call” if I needed anything. I was fortunate to have met them and be allowed to visit with them. This doesn’t happen all the time, but hopefully it will happen more.

So, why is this story important?

Because it speaks of the family of pizza makers that we all are part of. It is an example of family helping family, so that we all represent what is best in the pizza community to the rest of the world. I like to think we are different. I like to think pizza is different and that it is special — otherwise, what are we doing … and why?

I have to tell you that when I left the Marine Corps in 1988 after having spent five years living around the world and eating many things described as “pizza,” I was in utter desperation to have that which I longed for. It was few and far between outside of New York for me to find a halfway decent pizza. Thus, I began making pizza in a small apartment in Honolulu in 1989. This was strictly for survival, because I could no longer eat subpar pizza or live without it. I was determined to learn how to make traditional NY Pizza if it killed me.

Unfortunately, I couldn’t find much help. This was pre-Internet, pre-YouTube and social media or Amazon were not a thing. There were cookbooks, but you either knew people who owned/made pizza or you didn’t. And Hawaii was not a bastion of hope for pizza, Italian food or any type of resources for them.

Reaching out for help, to the one place I knew, New York, yielded a lot of hung up phones, getting cursed out, laughs and the occasional: “Get the F*#k outta hea.” Years of trial and error, improvising and acting like a crack addict “jonesing” for his next hit, I was simply trying to figure out how to make a good pie in the land of pizza wilderness.

Some years later two things changed all of that. First was my discovery of Pizza Today Magazine. Need I say more? Second was when I attended Pizza Expo in Las Vegas for the first time. I didn’t even own a pizzeria; I just knew I needed to go. On returning home from that first Pizza Expo, my wife asked me: “Well, what was it like?”  My reply was: “It was like I found my lost tribe and everyone was speaking my language!” I had found my pizza family and I’ve kept going ever since.

My trail to King Umberto’s all these years later, in a simplified version, goes something like this: I meet fellow Long Islander Pete Lachapelle of Pizza Today at a Beer & Bull session at the Expo in Las Vegas. Pete introduced me to Albert Grande of Pizza Therapy, a fellow pizza geek living in Hawaii — which now means I have a pizza cousin living close by! Albert and Pete introduced me to many other people (or other family members) at the Expo and the snowball began.

Later,  I was introduced to Roberto Caporuscio of Kesté in New York and Jonathan Goldsmith of Spacca Napoli in Chicago, both of whom took the time to talk in-depth to me.

A few years later, Jonathan Goldsmith visited Kauai and stopped by my pizzeria. He and his wife returned a few times during their stay. On their last night Jonathan asked me if I would be interested in going to John Arena’s new pizzeria in Las Vegas during the Pizza Expo to hang out while he, John Arena and Tony Gemignani prepped a few items with some other guys for the Expo.

My reply? “Absolutely! It will be like hanging out with the Led Zeppelin of pizza!” He laughed and gave me the day and time to be there. Of course, he didn’t inform John Arena and I went early before he got there. I felt a little awkward, but John was so gracious and accommodating despite all the things he had to do. He took the time to show me around and introduce me to a lot of people that day who were helping out, like family does. One of the people I met was Johnny Chez of King Umberto’s, along with his father, Ciro.

A few months later after signing a lease for our second location on Kauai, I wanted to focus more on my NY pizza-making skills. I reached out to Johnny Chez about coming out and spending a little time. Having only met him once, he responded back: “We would be honored to have you come and spend time with our family.”

Enough said. This is what the pizza family and community is all about. The honor, however, was all mine. Long live the King!

Tom Iannucci  is the owner of Pietro’s Pizza Kauai in Hawaii.