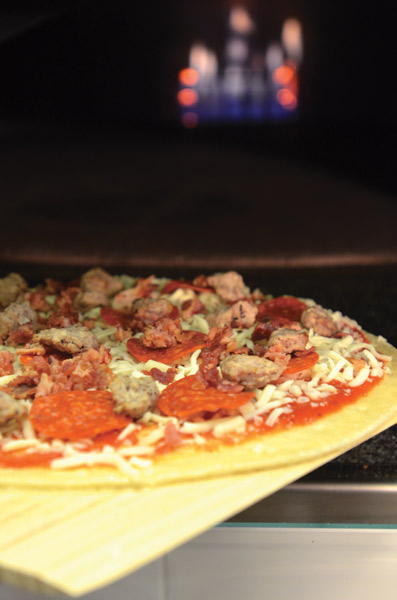 The Dough Doctor takes a look at quick-baking dough

I have been getting a number of requests over the past year on how to make pizzas for fast-casual concepts. First, we need to understand the concept, which is based on both the visual aspects of hand-made pizza combined with the fast service many of our on-the-go customers have come to expect. The dough used in making the pizza is made from a pretty generic formulation containing flour, salt, yeast, water, oil and possibly a dough reducing agent such as L-cysteine or “dead yeast” to enhance dough extensibility. While the dough can be mixed, balled and fermented for as few as four hours and then shaped into pizza skins, I think the finished crust benefits from at least an overnight cold ferment before being formed into skins.

While the dough balls can be opened into skins using just about any method desired, the best method seems to be with the use of a pizza press. The reasons for this are that the dough is oiled for pressing, which ultimately helps to prevent the skins from sticking together when stacked in the reach-in cooler for use. The press also provides a more consistent size, shape and thickness, which is important for the visuals of the customer watching their pizza being made before their eyes (and the ultimate baking of the pizza). Theoretically, any kind of oven can be used in this concept, but the oven of preference is a stone hearth, brick-type oven which can achieve baking temperatures of 750 F or higher. The reason for this is two-fold: first, it allows the pizza to be baked within the targeted time (typically three minutes or less). Secondly, and probably most importantly, it provides visual excitement for the customer in actually watching their pizza being peeled into the oven, baking and being peeled out of the oven and handed to them fresh and hot.

Making the dough for a press-formed pizza skin is pretty straight-forward. A planetary mixer is used, and water is added to the bowl followed by salt, sugar (if used), flour (a flour with a protein content of 11 to 12 percent seems to work best in this application) and a reducing agent. Mix at low speed just until the flour is hydrated (about two minutes), add the oil and mix an additional minute on low speed, then mix at medium speed for six to eight minutes.

The target finished dough temperature is 75 to 80 F. Immediately scale and ball the dough, place in dough boxes, wipe the top of the dough balls with oil and cross-stack in the cooler. Because we are making smaller pizzas, the dough ball weights will only be about five ounces, so the cross-stack time will only need to be about two hours. Down-stack the dough boxes and they will be ready to use in 16 to 24 hours. (Note: If a room temperature fermented dough will be used, the dough boxes can be stacked and sealed closed as soon as they are filled. Allow the dough balls to ferment for between three and four hours, or until the dough can be pressed easily with little or no snap-back at the press.)

After press forming the skins, place them on individual screens in the cooler for rapid cooling. Once cool (about 30 minutes) the skins can be stacked 10 high on a pan or cardboard circle with a sheet of parchment paper between each skin. Place a piece of parchment paper on the top skin and place in the reach-in cooler under your prep station for immediate use.

When an order is received, remove a pre-formed skin, place it on a small prep peel, and send it down the line to be dressed to the order. When the dressed skin arrives at the oven, the oven tender will peel the pizza into the oven and bake it to specification. As the pizza is peeled out of the oven it is immediately cut and handed to the customer. In many of the stores that I’ve assisted they will have two ovens side by side to keep up with the baking. As said previously, the baking time will be three minutes or less with something in the neighborhood of two minutes and
40 seconds being pretty close to the “norm.”

In keeping with the fresh and fast concept remember to have fresh looking toppings and be sure to cut the vegetable toppings thin enough to be fully baked within the short baking time provided. Above all else though, remember that your entire prep area will be on display as will your people, so extra line training will be in order to preserve the image and presentation being projected.

In my travels, I come across a good number of stores that do not have the luxury of a walk-in cooler, but instead use a reach-in cooler for their dough storage. In many cases, these stores experience problems with wet, sticky dough, blown dough and a gum line in the finished pizza. Mostly the problem stems from the lack of ability to cross-stack the dough boxes in the confines of a reach-in cooler.

It is true that the dough boxes can be placed into the cooler in an off-set manner so the ends of the boxes are open for ventilation, but a much better approach is to place a pan rack in the cooler or use existing shelf brackets to hold 18-inch by 26-inch aluminum sheet pans. Completely wipe each dough ball with oil (salad oil works well) and drop into individual plastic food bags, twist the open end of the bag to form a pony tail and tuck the pony tail under the dough ball as you place it onto the sheet pan. Do not tie the bags closed. By tucking the twisted end under the ball you will allow the bag to “burp” itself (expel gas) if excess gas is formed rather than rupturing the bag.

Place the dough balls about two-inches apart on the sheet pan and place directly into the reach-in cooler. The dough can be held for up to 48 hours in this manner. If you need to hold the dough for a longer period adjust the finished dough temperature to 65 to 70 F and you can hold the dough for up to 96 hours if desired. To use the bagged dough, remove from the cooler, allow to warm to 50 F and strip the dough ball from the bag by holding the bag open and inverting it, allowing the dough ball to drop out onto a floured surface. Most of the time you can reuse the bags a number of times without any problem. This procedure can also be used if you find that you are staying at your store into the early morning hours to finish down-stacking your dough rather than going home and getting some much needed rest.