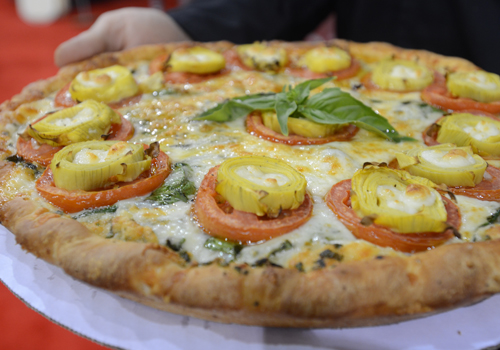 The perfect pizza crust results from flour, water, yeast and time. There is a science to it.

The key to why pizza tastes so good also lies in science. Topping a pizza, more science. It’s the melding of the five basic tastes — sweet, sour, salty, bitter and savory (or umami).

In layman’s terms, the taste receptors in one’s mouth are able to distinguish between the tastes and perceive them in different ways. They send alerts and stimulate brain neurons.

If you want to see the balance of the five tastes on pizza in action, look no further than the International Pizza Challenge. Pizza makers spend several months perfecting the pizza topping combinations. We’ve seen such interesting combinations as:

In Tony Gemignani’s Trending “The Missing Ingredient”, he narrowed the tastes down to four: sweet, salty, savory and acidic. He wants every pizza to have at least three of the four profiles.

He’s not alone in the various interpretations. A few years ago, some scientists from Purdue University even introduced a sixth taste: fat (also called oleogustus). There has also been a contingency that wants spicy added to the list. Capsaicin in spicy ingredients causes a burning sensation. While many love the “flavor”, spicy does fit the criteria to be a basic taste. However, the five other tastes are well defined and point to why pizza tastes so good.

Think of the five tastes as the pillars for flavors in recipe development. Each has a role to play to create the ultimate pizza combination. They are there to stand out from, complement or counterbalancing each other. Let’s break down each taste:

Creating the perfect pizza topping combination is a game of mixing and matching flavors. You take the component of each taste to find the right balance. Toppings are endless. Many pizzerias offer 40 or more options. You know you have a perfect pizza from taste. Instead of listing ingredients, balance that next specialty pie using the five tastes.

What if a combination is…

Get the Mushroom Umami Pizza recipe.

While a Margherita pizza with sopressata hits all of the tastes. Let’s explore a different variation.

Get the Sopressata Suprema recipe.