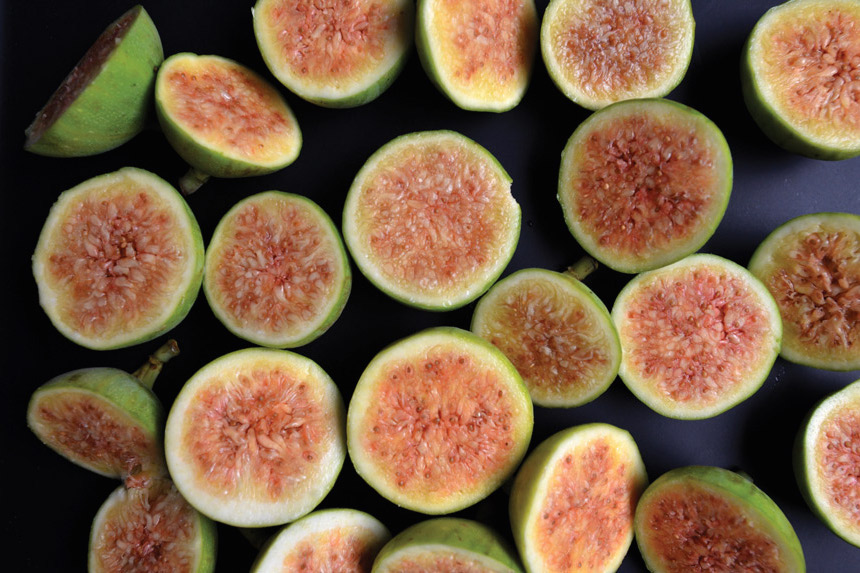 Gettin’ Figgy With It

Gettin’ Figgy With It

When you’re standing in your pizzeria or restaurant kitchen holding a small, plump fresh fig in your hand, three words come to mind: “What wimpy fruit.” But after you start cooking with these fleshy wonders, you’ll realize that nothing could be further from the truth. After all, figs have sustained the souls of the Egyptian pharaohs into the afterlife. Buddha received enlightenment under a fig tree and the Romans even started wars for this amazing fruit. In the past, most Americans in colder climates only knew figs to be the filling in Fig Newtons, but now many intrepid restaurateurs are catching “fig fever.”

The fig originated in Asia Minor 100 million years ago. Early Greek and Roman goose breeders fed geese figs to give their livers an unctuously sweet flavor. Africans and Spaniards dried their fruit and arranged it in star patterns to enjoy in the depths of winter. For centuries, the white Dottato figs in Calabria have been wrapped in the fig leaves from the same tree and baked, releasing an intense flavor. In 1520, Spanish missionaries introduced figs to California, which have been bred into the wonderfully plump “Mission Figs.” Let’s delve into this sweet fruit.

Kadota: Also known as the Dotatto in Italy, with yellowish skin and silky flesh.

Because figs are very fragile, the harvest time is so short and they don’t grow in colder climates, people have manipulated them by drying, grinding and jamming them in many different ways. Because I use copious amounts of fig jams to create an “agro dolce” (Italian for sweet and sour) effect with stinky cheeses, I’ve found that it is easier to thin the jams out with water to deliver a nice stream on pizza. Here are some great jams of the world.

Maakoud is a thick and chunky sun-dried fig jam from Lebanon and is made from rough chopped figs, sesame seeds, a touch of fennel and sugar. Its intense fig taste is complemented by the fennel and sesame perfectly. This is hard to use on
pizzas, but perfect for an appetizer platter of cheeses and charcuterie. This product runs at 25 cents an ounce.

Turkish fig jam is available from the preserves of the dried green fig and tends to be very sweet with sugar as its second ingredient. It doesn’t have that “tang” that other fig jams have, but it does have fewer seeds. This is the cheapest fig jam on the market at 17 cents an ounce.

New Zealand fruit paste is packaged as a gourmet item and is as intense as pastes get. It has a lot of gelling agents and acidity regulators. It is delightful cut into small cubes with wafers and goat/sheep cheeses. This is very expensive.

Mechaalany brand whole figs in syrup hail from Lebanon. The sweetness of these figs belies their ordinary brown look. The texture of soft, intense fig taste is almost magical. Some of these are marinated with clove, sesame and citric acid. They can be ground down and watered to make your own fig jam, which will stretch the 32 cents per ounce cost.

Dalmatia Fig Spread is known (by me) as the “king of pizza fig jams.” I’ve seen this fig jam used on many a winning pizza at the World Pizza Championships in Italy, as well as the International Pizza Expo in Las Vegas. This has both the intense citrus “twang” of a great fig jam without being overpoweringly sweet. It is from Croatia and is also available with orange added — but is very expensive at $1.29 an ounce.

Figs and the more-intense fig products figure into the culinary scene today with myriad uses.

Because of the easy availability of dried figs, you may want your own proprietary fig jam. This method is as easy as fig-pie and doesn’t call for large amounts of sugar and pectin. For between $6 and $8, I can make four cups of surprisingly delicious fig jam that keeps under refrigeration for weeks. I like to add fresh raspberries for the nice color and tangy flavor they add.

Further Manipulation: To turn your proprietary fig jam into a fig-mascarpone pudding, just add 8 ounces of mascarpone cheese and 2 ounces of whole milk ricotta and blend.

This is an example of a “staged pizza,” or a pie that is set into the oven and topped in stages to accommodate ingredients which cannot be cooked from the beginning. In the final stage it is topped with cold items that react better when their textures and flavor affinities are not heated at all.

This pizza is perfect for its combined flavor of sour, sweet and bacon, which is better par-cooked in the pizza oven to eliminate a lake of bacon fat on the pizza. This pizza can also include dollops of the fig mascarpone pudding recipe if you wish.