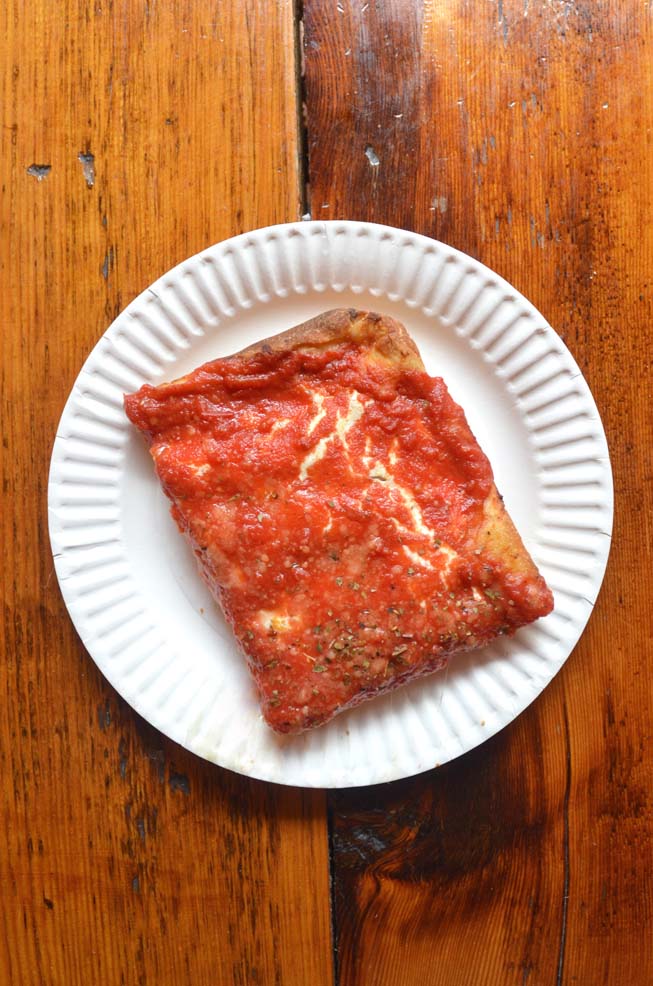 When I was a kid living in New Jersey I would ride my bike to my favorite pizzeria — Joe’s Pizza (super original on the name) — after school and order a slice to ruin my dinner. One day I saw a thick slice of square pizza and asked Joe, “What’s that?” He said, “It’s Sicilian style.” In my ignorance I asked what made it “Sicilian,” and he said, “Because I’m Sicilian and I made it!”

By that logic all of his otherwise circular pizzas should have also been Sicilian, but I digress. His wife, whom I knew only as “Mrs. Joe,” would make a different style of pizza on days she ran the place instead of Joe. She made a thinner pizza, also square, but with slices of mozzarella and the sauce on top. When I asked what THAT pizza was, she said it was “Grandma style.” In fairness to Mrs. Joe, she didn’t retort with a wisecrack line like her husband’s “because I’m Sicilian.” I just assumed the family was naming pizzas after themselves, that they must have grandchildren, and I left it at that.

As I got older I would go to other pizza places in the five boroughs with my dad. This was before Yelp! so we didn’t make our choices based on the Zagat guide as much as on dad’s friend-of-a-friend who likes this one place-near-a-place-we-had-to-go-anyway-so-we might-as-well-grab-a-slice guide. Prince Umberto’s was one of those childhood places I visited with my dad that had Grandma-style pizza. I didn’t know as a kid I was eating someplace with historical pizza significance. Same for when I went to Di Fara as a kid. These were just places we’d go to on our regular outings.

My dad grew up in Manhattan and left when he joined the Marines. We lived all over America, mostly in the East Bay area of San Francisco until I was eight and then moved to New Jersey where I lived until high school. The wonder years of my pizza childhood took place all over the tri-state area. I came to realize two very real truths about pizza: the bigger the menu did not mean the better the place, and any real pizza place will be obvious by its smell.

The added bonus of any awesome pizzeria in my eyes was if it featured a square pie, it was showing a willingness to be different — to not be a one trick pony. Even if the menu was small, any ma and pa pizza place could still have a Grandma pie. Why not, right? It’s super simple, a massive differentiator, and evokes that nostalgia that is its namesake, “Grandma.”

I loved going into a new pizzeria with my dad and seeing the square behind the glass, waiting to be thrown into the oven for a second time. My dad would get the biggest size slice they had. And, if it were under a 20-inch pizza, he’d get two. I’d get the Grandma if they had it or the Sicilian, which was a little more typical. The surprised enthusiasm I had for finding a pizzeria with a Grandma style was the same enthusiasm I had for catching an episode of the Adam West Batman TV show and being pleasantly surprised when the opening credits showed it was with guest star Yvonne Craig as “Batgirl.” You could tell right away she was in the episode because she drove her purple Bat Cycle in front of the Batmobile. These were things I got excited for as a kid and not much has changed.

So what’s Grandma style all about? Well it may not be as deeply rooted in history as say the Margherita or even the Stromboli I talked about a few months back, but hey, it’s named after Grandma… can’t be bad, right? Its roots are in Long Island, and it’s said to be a pizza so simple that your grandma could make it quick for hungry kids. There’s typically a lot of olive oil involved, so while it bakes it’s also kind of frying as well, giving that soaked-in flavor to the crust. Sicilian, on the other hand, is more focused on airiness with the bread. Sauce on a Grandma-style pie has no hard and fast rule. Your rule is what you make of it…  what kind of sauce did Grandma make? That’s the sauce. That plus mozzarella; sometimes above the sauce, but usually below, is rule of thumb on this pie.

As for incorporating it into your place all I can say is this: pizza is about bringing people together. You can’t share a burger but you can share a pie. Even if it is in slice form, it’s a communal experience. Grandma is another differentiator for you and your local area (which is most likely not flooded with this certain style). It’s fun, flavorful and unique. There’s not a ton of rules on what negates it from being “Grandma Style,” so you can do some different things with the toppings and still call it Grandma without being inauthentic.

Another major plus of the Grandma style is that it doesn’t require a par-bake. This is a massive thing for those pizzerias not looking to be married to a certain quantity for sale on any given day. You can make it as it’s ordered and save on that prep item. Your only real investment beyond time and training here is the pan to get up and running and having this as a new brand differentiator inside your store.

To a lot of rural and Midwest pizzerias, this is so atypical that you’ll be way ahead of the curve to introduce a Grandma into your menu. If you’re still on the fence about it, pick up just a few pans, try it out as a special and see what feedback you get. I’ll let you in on a secret now: bread cooked in good olive oil with cheese and sauce has a 99-percent certainty of not being bad. Especially if you’re like me and you still like riding your bike to eat a bunch of pizza that then ruins your dinner — even when you own the place that makes and ruins your dinner.

Mike Bausch  owns and operates Andolini’s Pizzeria in Oklahoma. He is a frequent speaker and presenter at International Pizza Expo.