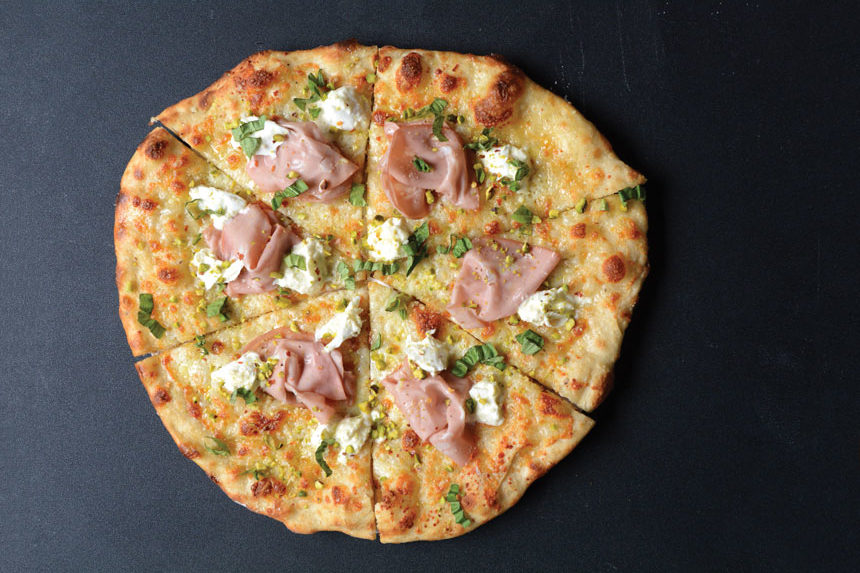 Let’s set the record straight. Mortadella is not an Italian version of that famous American lunchmeat.

Traditional Mortadella is made with finely ground pork, high-quality pork fat (typically from the throat), peppercorns, blend of spices, myrtle berries, pistachios and stuffed into casing. Its slices have a distinctive look of pink sausage with visible peppercorn and lardon shapes throughout. A minimum of 15 percent of the sausage’s weight comes from the lard.

Originated in Bologna, Italy, Mortadella can be traced as far back as the 1200s, but the first known scribed recipe appeared in the 1600s. The Romans called it “farcimen mirtatum” (Myrtle sausage) and it was ground with a mortar.

The Emilia-Romagna region is so enamored with its prized product that the town of Zola Predosa even holds the International Festival of Mortadella each September to celebrate the “Pink Queen” and its production in the region.

You may notice packaging labeled with IGP (Indication of Geographic Protection). This ensures it originated from the specific region.

You can find mortadella by the slice or in a large log. “When sourcing mortadella, mortadella should be a nice blend of meat versus fat,” says Nicole Bean, owner of Pizaro’s Pizza in Houston, Texas. “Too fatty = less flavor, also reduces quantity in my opinion. I prefer mine without pistachios, but if you want authenticity then you must have pistachios.”

Lars Smith of State of Mind Public House and Pizzeria in Los Altos, California, has added mortadella to his summer pizza menu and has competed with a pizza featuring mortadella at this year’s Pizza World Championships in Parma, Italy. He says he looks for nice pink color and large pieces of fat within the mortadella. “I love pistachio in the mortadella but that’s not a requirement. Like all meat there are a few companies I know make quality products and I buy my mortadella from them.”

Like other Italian cured meats, mortadella can be used across the menu in appetizers, sandwiches, salads and pastas.

Mortadella has been paired with a variety of ingredients. Cheeses include Pecorino Romano, Burrata, ricotta, Stracciatella and fresh mozzarella. Toppings vary, from pistachio, artichoke and garlic to pesto, arugula and Peruvian peppers. One popular item is a Charcuterie board with other Italian meats. There is also the New Orleans’ original Muffaletta sandwich which includes mortadella, accompanied by Genoa salami, Capicola or ham, marinated olive salad, Swiss cheese and provolone.

For pizzeria application, mortadella is often thin-sliced or cut into cubes. There is a bit of a debate whether to cook mortadella or serve it as a post-baked finishing ingredient. Each perspective has its merit. “For me the only way to apply mortadella is after the pizza is baked,” Smith says. “I like it sliced very thin, that way it sort of melts on to pizza a bit but maintains its flavor and soft texture.”

But Bean hopes to change hearts and minds on heated mortadella. “Cooked mortadella gives me a warm and fuzzy feeling, like when I was little and my mom made me bologna sandwiches for lunch,” she says. “But the crisp edges and tender interiors really drive home the textures of a simple “left over” meat. Especially if cooked in a brick oven, the pistachios take on a roasted flavor that enhance the flavor profile.”

It really comes down to preference and testing the various ways. Mortadella is a versatile pizza topping. Bean incorporated the meat on Pazaro’s menu. “We’ve used it with delicious artichoke and olive blend,” she says. “That’s been my favorite so far, reminds me of New Orleans.”

Smith’s competition pizza and new menu item is his current favorite way to use mortadella. “It features summer squash, red onion and fresh cream. After it is baked I add mortadella and a mint-pistachio pesto.”

Pizza maestro Luke Davis in Charleston, South Carolina uses mortadella. “I think my favorite I’ve done with mortadella was creamy ricotta base, mozzarella, asiago, mortadella and house-made spicy honey,” he says, “very simple but well balanced. You’ve got the creamy/milkiness of the ricotta and mozzarella, sharpness from the Asiago, rich/fattiness of the mortadella, and sweet/spicy from the spicy honey.

Instead of thin slices or cubes, Davis says, “My favorite way to use mortadella is to julienne or battonet. You get a slight crispness on the outside with the middle staying tender and it renders some of the fat, but not as much as if it was thinly sliced. It’s also quicker to evenly distribute on the pizza. I’ve found fatty meats that are sliced thin and cooked on the pizza shrivel up too much and render the fat too quickly making the pizza overly greasy.”

Now that you have your creative culinary juices flowing, here are two basic recipes (one with mortadella as finishing ingredient, the other baked) to expand upon: