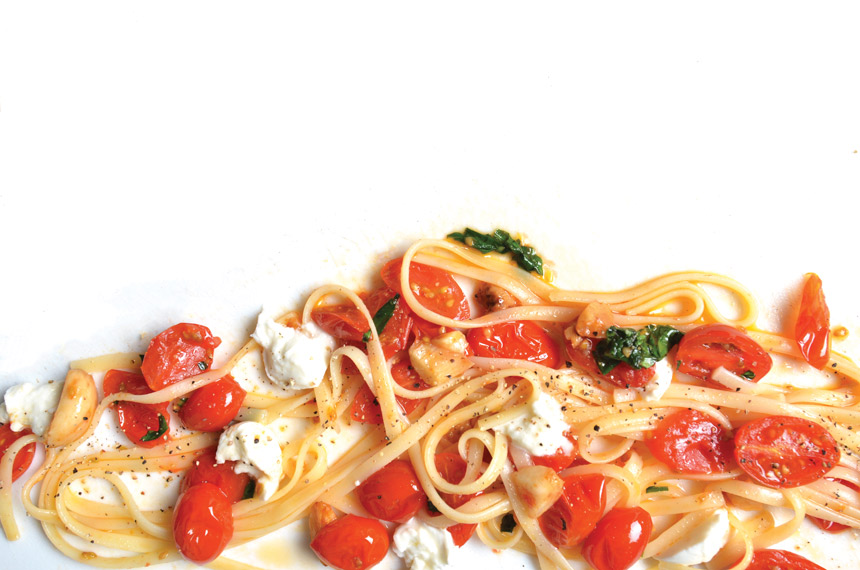 Pasta: The Long Way ’Round

Pasta: The Long Way ’Round

Linguine is a must-have on any pasta menu

inguine is a staple not just in Italy, but also in most restaurants around the world. It’s a perfect pasta to use across many cuisines. I want to share with you different ways to purchase it and different ways to cook and serve it. I’ll give you some of my favorite recipes that have been popular in my restaurants over the years!

First, understand that linguine is the closest cousin to spaghetti — but is flat instead of round. It’s not wide like pappardelle or fettucine, but very thin in nature. When cooking linguine — whether you are using dry, fresh or frozen — it’s important to spend a little extra time to stir and separate the strands more often when it hits the salted, boiling water because of its flat nature. Otherwise they will cling together if not pulled apart with a pair of tongs while cooking. There are two trains of thought when cooking pasta: one is cook pasta to order and the other is to pre-cook pasta slightly under “al dente” and subsequently drain, cool and lightly oil the pasta. Next you portion it and then dip it in boiling water for 20 seconds to order. This works for a higher volume and quicker paced eatery.

Dry pasta takes approximately eight minutes to cook. Fresh pasta will only take two to three minutes, so clearly when the desire is to cook pasta to order, using fresh pasta is easily the best choice. For the last four years in my Italian restaurant, I was making fresh pasta daily. It certainly is a superior product and enhances the guest experience. I will say that using great dry pasta imported from Italy is cost effective and also provides an excellent end product when cooked properly. On that note, freshly made pasta can certainly be overcooked and ruined, so give the attention that cooking pasta demands for the best end product you can produce.

Linguini can be purchased dry, of course, which will give you the longest shelf life. You can also buy it fresh if you don’t have the ability to make it yourself and will need to ensure it gets used before its expiration. You can also purchase linguine frozen. You’ve got a couple of options: thaw it out under refrigeration and cook it to order, or simply leave it frozen and drop it in salted, boiling water to order.

Obviously linguine can be used for all the standards that you are probably aware of. But just in case you’ve been walking around with your eyes closed, here’s a list of some classic standards:

Let’s get into my favorite stuff. Something I grew up in New England with and is a real crowd favorite is linguine with clam sauce. It even went over very well in the South (although, I think most of the people who ordered it were from up north).

You’ve got a couple of clam options for this recipe: baby clams or chopped sea clams, both of which are available fresh, frozen or canned. I would not recommend canned chopped ocean clams, since they are darker in flesh and much stronger in flavor, leaving a less desirable flavor profile. For this recipe’s sake, we’ll use canned chopped sea clams. You’ll get 12 cans to a case. While they are expensive, you’ll charge appropriately and should have no waste since you’ll be making small batches. Even though you’ll use the clam juice they are packed in, I still like to add clam base for a perfect balance in flavor. Here’s my recipe:

Heat to order and toss with linguine. Garnishing this dish with little neck clams is an awesome touch!
> Get the Clam Sauce Recipe.

> Get the Vegetable Lo Mein Recipe.

Here’s one that I absolutely love with a Thai flair to it.

> Get the Cold Sesame Noodles Recipe.

As you can see, you can take linguine in many different directions other than the simple standards. Try these dishes and delight your guests. They are my creations and have been delighting my diners for years.

Jeffrey Freehof  is a frequent contributor to Pizza Today and International Pizza Expo.