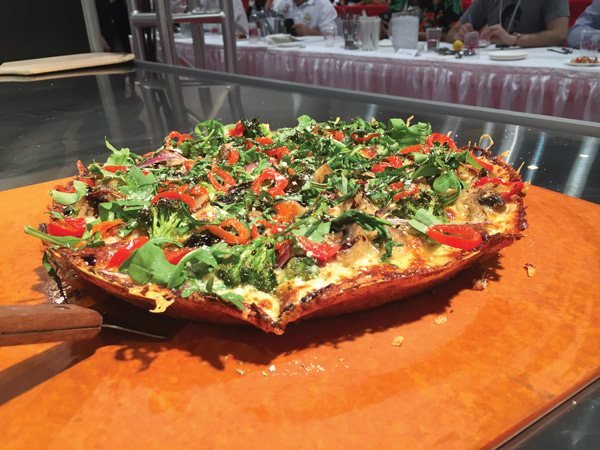 The eyes of the industry turn to Las Vegas every year for a glimpse into the future of pizza. Gadgets, gizmos, techniques and insight fill the International Pizza Expo show floor and seminar rooms, but the tastiest action happens at the culinary competitions of the International Pizza Challenge. The competition is divided into five sections. Traditional, Italian, American Pan, and Gluten Free each have their own set of rules and regulations but the Non-Traditional category has no guidelines whatsoever. Competitors can use any combination of crust, sauce, cheese, toppings and finishes to achieve the ultimate pie. This year, 60 pizzaiolos toted ingredients from their respective home bases to vie for cash prizes and bragging rights. The results show some clear pizza trends that are sure to resonate throughout the entire industry.

Attention to crust is on the rise, as evidenced by the number of pizzas that utilized advanced techniques, preparations and finishes. Several description cards boasted about long rise times and use of pre-ferments such as bigas, poolishes and mothers. The resulting crusts had more developed flavor and texture than their direct-method opponents. Successful uses of pre-ferments and long fermentation were also impressive because they take much greater effort to produce and maintain than dough mixed on site, demonstrating a degree of difficulty in a convention center hundreds of miles from home.

IPC judge Domenico Crolla noticed the growing popularity of high hydration dough at the competition. Many competitors are pushing their formulas to hold over 70-percent water content, a technique that results in a lighter, airier crust. “From a dietary perspective, there are fewer calories and lower carbs in every slice. It’s easier to digest and tastes lighter,” says Crolla, who owns Bella Napoli in Glasgow, Scotland.

Some competitors took their crusts to the next level by augmenting them with additional post-fermentation elements. Tony Vacchio of Zola’s Restaurant in Ottowa, Canada presented a crust infused with Indonesian charcoal powder. Besides coloring the dough, charcoal is said to help fight indigestion, lower cholesterol and help treat intestinal problems. Competitor Louie Bossi made use of a type of flour called grano arso, or “burnt grain,” to achieve a darker look with an earthy flavor. Peasants in the Puglia region of Italy traditionally used bits of wheat left over from the harvest and subsequent burning of grain fields as a cheap way to supplement their flour supply. This return to peasant techniques is permeating the entire restaurant industry.

Seeds were big this year, making their way onto both the outer crusts and centers of several pies. Drew Sassi of Pizzeria Davinci in Connecticut created a bagel effect by adding poppy and sesame seeds to the edge of his stretched dough. Dylan Andrews of Palo Mesa Pizza infused the crust of his corned beef and cabbage pizza with a mix of caraway and mustard seeds. IPC judge Crolla enjoys the technique. “I’m a fan of this and use it regularly at my own restaurant to impart flavor, eye appeal and texture,” he said of the trend.

This year’s competition also saw an upswing in strong flavors at both sides of the spicy-sweet spectrum. IPC judge Mike Bausch noticed the repeated use of spicy peppers and salami, but pointed out the growing trend of using honey and Sriracha to finish pies. Donovan Swart of Panarotti’s Pizza Pasta used a drizzle of honey to complement his combination of steak, bleu cheese  and mushrooms. A dynamic mix of rum-butter marinated pineapple and hibiscus jerk BBQ sauce made its way onto Ed Barbeau’s entry. “I noticed and enjoyed the use of berries – strawberries and blackberries in particular,” says IPC judge Scott Anthony. Andrew Scudera of Staten Island’s Goodfella’s Pizza took third place for his unique pizza that combines seafood with berries. He marinated crab in a blend of blackberries and raspberries for 24 hours to evoke a subtle sweetness. “We’ve all heard of frutti de mare, or fruit of the sea, so I decided to try fruit and the sea,” said Scudera of his unusual yet successful flavor combination.

IPC judge John Arena of Metro Pizza in Las Vegas says this year’s competition showed a trend toward tart flavors on pies that would have otherwise been considered standard. “A nice twist was the addition of sour components in the form of vegetables pickled in-house to add another layer of complexity,” said Arena. The pickled red onions on Jonathan Creasey’s Mexican pizza entry brightened up not only the pie’s flavor balance, but also its presentation. Arena recalls another entry that paired pickled ginger with spicy shrimp for an unexpectedly tasty pie.

The norms of pizza construction were challenged this year by pizzaiolos who prioritized post-bake ingredients. As Arena noticed: “Many of the pizzas had more work done to them after the bake than before.” Standard post-oven items like arugula and prosciutto were there, but options expanded to ingredients like carrots, green onions, avocados and cream sauce. Saving toppings until after the bake gives competitors a slight advantage because it allows them to maintain control over the look of a finished pie rather than surrendering to the unpredictability of an unfamiliar oven.

This year’s competition clearly demonstrated an overall trend of focus on specific ingredients and processes. Much attention was given to dough, which transformed from a mere platform upon which the recipe is served to a crucial component of the recipe itself. Pre-ferments and post-oven treatments highlighted a completist approach to pizza making beyond performances from previous years. With the rise of health-consciousness in the market, it’s important to note the repeated references to digestibility and medicinal value in IPC entries. Interestingly enough, much of these so-called health conscious methods are actually returns to pre-industrial processes. Uncommon ingredients such as seeds, berries, and sweet elements were the most memorable to the judges and hint at trends to come, as we get closer to next year’s competition.

“It’s not just about sweeping the kitchen or creating novelty pies,” Arena says. “The best competitors put a lot of thought into every ingredient.”