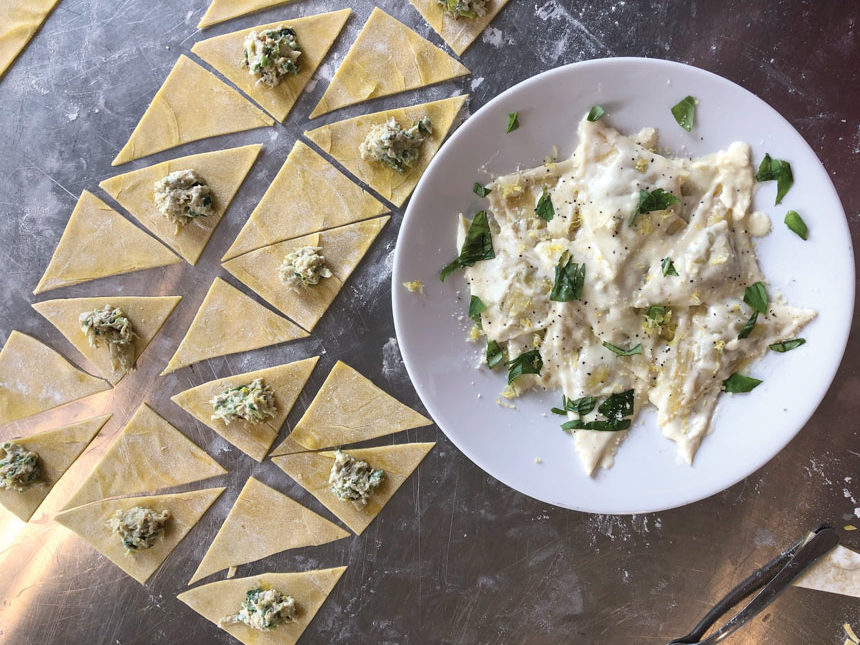 Ravioli Filling: In Between the Sheets

Ravioli Filling: In Between the Sheets

Ravioli’s roots run deep in Italian history and it is one of those iconic foods that was born out of necessity and even poverty. This stuffed pasta was first mentioned in a 14th century manuscript with a recipe of fresh cheese, egg and fresh herbs. In Tuscany, the tortelli historically refers to stuffed pasta like ravioli but more to the shape that resembles the breast of small birds (tordi). The cooks of the great Genovese fleet were said to prepare ravioli when proteins on board the ships ran low.

Ravioli’s exact shape and name vary as much of this stuffed dumpling has been around.  Variations of ravioli can be found with the Chinese won ton, the Russian Pel’ meni, the Tibetan Momo, the Indian Gujiya and the Jewish Kreplachs. The Sicilian and Maltese Ravjul were stuffed with “irkotta” cheese and are earlier versions of ravioli than the northern Italian stuffed pastas. In Le Marche, the ravioli is simply stuffed with ricotta, parsley and nutmeg and paired with sole from the Adriatic.

The first ravioli were believed to be served only in a brodo or broth, and variations of this theme can still be found with the diminutive Tortellini in Brodo, which is the signature dish of Bologna. The Agnolotti finds its history when the Marquis of Monferrato asked his chef, Angelot, to prepare a feast after a victory. The chef prepared filled pasta with cooked meat and served it with a simple dressing of meat juices and melted butter. The Casonsei dates back to the 14th century in the Brescia region of Lombardy and northern Veneto. This Renaissance name translates to “small caskets” and are half-moon shapes and contained cinnamon and almonds, but now are made with sausage, milk-dipped bread and Parmigiano.

Here are some other shapes and their fillings: (Variations depend upon the chef and his/her traditional or non-traditional path to flavor and texture.)

This is a fabulous “go-to” filling both for our famous fougasse breads but also for ravioli. I’ve always loved lemon cream with Parmigiano and this combination of both is decadent and bright at the same time.

Get the Leek-a-Choke Ravioli recipe.