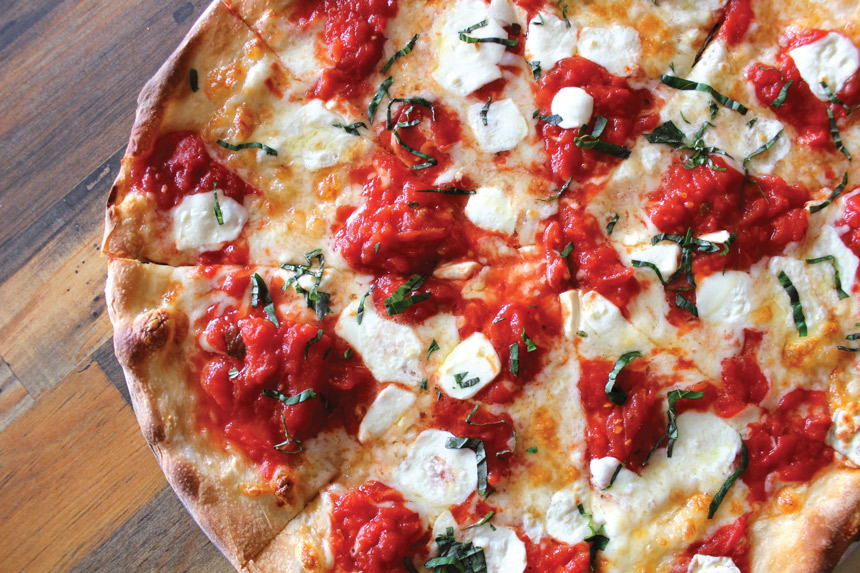 How much do you know about this classic style?

With a monolithic prison on one side and an entire block of abandoned factory buildings on the other, the intersection of New Jersey State Route 129 and Cass Street doesn’t betray its history as the entrance to a vibrant community. The once-bustling neighborhood of Chambersburg has resigned to a post-industrial slump that seemed impossible 50 years ago. At its peak, this section of Trenton, New Jersey, was known for its restaurants, bars and shops. It was alive and electric. Chambersburg was no different from the other Little Italy neighborhoods scattered around the northeast with the only exception being that it failed to become a tourist destination after the factories shuttered. The only attractions that lured visitors to the desolate streets of Trenton’s Little Italy were the few remaining tomato pie restaurants. These local joints became beacons of the past for those who remember their heyday and drew curious culinary travelers with penchants for the past. As with any regional pizza style, the story of Trenton tomato pie is seasoned with history and legend.

A December 6, 1903 article in the New-York Tribune uses the phrase “tomato pie” to describe the Italian pomodoro pizza, a thinly stretched dough topped only with tomato. Calling it a “pie” gave unfamiliar patrons, both American and Italian, an easy explanation of the mostly unfamiliar food. The New York area still clings to this descriptor, using it as shorthand for all pizza, but Trenton held onto it as the preferred nomenclature for its particular variation of the dish.

Nearby Philadelphia has its own dish called tomato pie, which is not to be confused with its neighbor in New Jersey. Philly tomato pie is thick and rectangular, like a dense focaccia topped with crushed tomato and no cheese. It’s served at room temperature from the counters of local bakeries. Trenton tomato pie, on the other hand, is more recognizable as a Neapolitan pizza derivation. It’s round and lightly topped with mozzarella and tomatoes. Unlike contemporary cheese-laden pizzas, Trenton tomato pie puts crushed tomato on top of a gentle layer of low moisture mozzarella. Each purveyor has a slightly different take, but all versions are dense and crunchy without the characteristic flop of a New York slice.

The origin story for tomato pie is a familiar one. Neapolitan immigrants settled in Trenton to work in the factories, with some taking necessary neighborhood jobs. Joe Silvestro opened a restaurant called Joe’s Tomato Pies on South Clinton Avenue in 1910. They baked thin, crunchy pizzas with a light amount of cheese topped with roughly crushed tomatoes. One of Joe’s employees, Joe Papa, split off in 1912 to open his own restaurant, called Papa’s Tomato Pies, just down the street when he was only 17 years old. Although it has moved several times over the past 105-plus years, Papa’s has operated continuously since it first opened. That makes Papa’s the oldest continuously run tomato pie restaurant in the United States.

Owner Nick Azzaro talks about running the pizzeria like it’s a lifestyle rather than a job.

“The history of tomato pie is the history of my family. We were there when it all got started,” says the third-generation owner.

Papa’s may be the oldest, but the most famous name in Trenton tomato pie is DeLorenzo’s. Pasquale and Maria DeLorenzo emigrated from the town of San Fele, about 145 kilometers east of Naples. Their four oldest sons, Jimmy, Joe, Johnny and Alexander (“Chick”), opened a restaurant on the corner of Hudson and Mott Street in the late 1930s. By 1947, business was swift enough to support a second location down the block on Hudson Street. Chick split off to open his own DeLorenzo’s, leaving his brothers to move their operation to nearby Hamilton Ave shortly thereafter.

“We have no idea how they got into the business,” says owner Sam Amico, grandson of Chick DeLorenzo. “They were a big family and needed to figure out a way to support themselves.” Very few of the early American pizza makers had any experience with pizza or baking before starting their businesses, which explains the immediate departure from processes and techniques of the old country.

The original tomato pie restaurants all started with coal-fired ovens but most converted to natural gas in the 1940s and 1950s. “It was easier to use, cheaper to run, took up zero storage space, and baked pies more evenly,” says Sam Amico. DeLorenzo’s on Hudson Street scrapped their coal-burning oven in the mid-1950s in favor of a pair of gas-fired units. Papa’s took the intermediate step of retrofitting their coal-burning oven with a natural gas system before trading in the whole thing for a new Baker’s Pride oven. The decrease in temperature that came with a switch to natural gas resulted in a crunchier crust thanks to the longer bake time.

After 89 years in business, Joe’s Tomato Pies closed its doors in 1999, leaving Papa’s and DeLorenzo’s the only remaining tomato pie restaurants from the old guard. Although they’re still in business, both have closed their Trenton locations and moved to new digs 10 miles down the road in suburban neighborhoods. DeLorenzo’s Pizza moved to nearby Hamilton, New Jersey, and their cousins, DeLorenzo’s Tomato Pies, are in a brand new shopping center in Robbinsville, New Jersey. You’ll find Papa’s Tomato Pies just two blocks away, in the middle of a construction site that promises to be a bustling new shopping complex. Customers aren’t fazed by the move, as most have already fled Chambersburg for greener pastures. The new locations may not have the dusty charm of Trenton, but the parking’s much better.

Pizzerias in New Jersey and beyond have either added tomato pie to their menus or built entire concepts around it. Joey’s Pizza of Hamilton (not related to Joe’s Tomato Pies) has an Old Fashioned Tomato Pie on its menu that features a blend of fresh and low-moisture mozzarella topped with crushed tomatoes. Mercato Tomato Pie in Newark, New Jersey, uses a coal-fired oven to achieve a bake closer to that of the original tomato pies of Trenton. Gennaro’s Tomato Pie in Philadelphia is making pizza closer to the Trenton version than the rectangular Philly bakery style. Tony’s Pizzeria Napoletana in San Francisco (and its Pizza Rock cousins in Sacramento and Las Vegas) have a Trenton Style Tomato Pie on their menus, specifically calling out “DeLorenzo’s Style” for a version of the pizza with sausage.

With the only real identifier of tomato pie being that the tomatoes are lightly crushed and go on top of the cheese rather than below, the name itself is more a marketing tool than culinary guide. As the national delivery chains gained market share, the word pizza has earned a reputation for referencing fast food. For new pizzerias, using names like flatbread and tomato pie provide an opportunity to escape that association that could devalue it in the eyes of consumers. Old New York pizzerias like Totonno’s, Sam’s Restaurant, and John’s of Bleecker Street apply tomatoes on top of cheese while calling their product pizza. According to Nick Azzaro of Papa’s, “There’s no difference between a tomato pie and a pizza.” That may be true from a culinary perspective, but Trenton natives will defend their regional style as an entity unto itself.