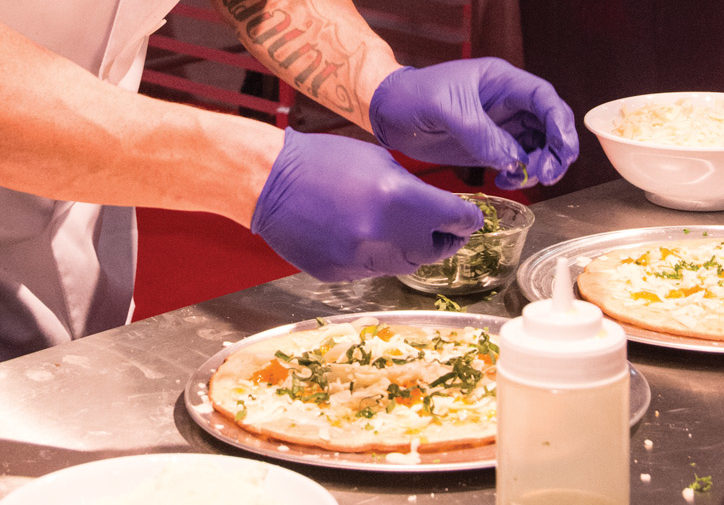 The use of gloves in restaurants is common, but is it done right?

The impetus behind this story is a tale as old as time: while waiting to place an order for a donut and a coffee at a large breakfast chain, I waited for the only counter employee to finish his cigarette just outside the front door. He came back in, greeted me warmly and started to reach for my chocolate donut –– without washing his hands or using even so much as a spritz of hand sanitizer. I gave him a quick reminder, and he sheepishly washed and dried his hands before handing me my donut –– which promptly went to the trash after leaving. In fact, I haven’t been back.

Gloves became a primary topic in the last several months as the Center for Disease Control identified Hepatitis A outbreaks amongst food service workers across a number of cities. Symptoms such a nausea, vomiting and fatigue can last up to two months –– not cool if you work in food service. The same applies for noroviruses, which are most commonly spread by hand. The use of gloves in restaurants is common, but is it done right?

“Glove usage is especially important in an open kitchen scenario,” says Jay Jerrier with Texas-based Cane Rosso. “Finishing pizzas with gloves is important so that customers can see that we are keeping that barrier. That goes hand in hand (get it?) with our cooks looking groomed and clean.”

Gloves are also necessary “whenever handling ready to eat foods,” says Michael LaMarca, owner of 11-store Master Pizza. “We also mandate that they change them after each order. We calculate our COGS to include a pair of gloves with each menu item. We also error on the side of glove use. For example, if you are debating on wearing them or not, we say wear them. We keep gloves dispensers by all food stations and cleaning stations. We keep hand sanitizer by all cash registers and phones.”

“But in pizzerias, business runs quickly and this just recently happened to me,” says John Zozzaro, owner of The Downtown Café in New York. “We hired a new counter person for the pizzeria and they just rang someone up and gave them back money, then (went) and helped the next customer who wanted toppings on a slice. They forgot to put gloves on and proceeded to touch the toppings in the fridge. So I see this, and I have to throw away the slice and the condiments in the fridge that they just touched.”

Laura Meyer, the executive chef for a number of companies that fall under the Pizza Rock and Tony’s Pizza Napoletana brands, manages stores across state lines. “Because we have restaurants in various cities where health departments are more strict than others, it varies slightly but not much,” Meyer says. “In Vegas, they wear gloves all the time no matter what. In California, they wear gloves most if not all the time, but on occasion those who are stretching dough do not wear gloves.

The gloves are purple in Vegas, so they are easy to spot when someone isn’t wearing them. Every employee no matter the location is food-handler certified, so everyone knows the rules about gloves and cleanliness.”

Meyer also helps run a number of slice shops in the San Francisco area. With slice organizations, gloves come on and off more often as customers pay.

“For the slice houses, we normally have cashiers that are only cashiers and don’t touch food, so they don’t wear gloves. But if they are in a situation where they must wear gloves, then there is a box everywhere so they are easily accessible,” Meyer says. “Most people think gloves are a fix-it, when, in reality, if not used properly they make problems worse. … ringing up cash with them on and then making food, not changing them enough, or touching the wrong things and then using them, blowing into them before putting them on, etc.”

At Zoli’s, the slice house under the Cane Rosso umbrella, using gloves has become a prominent part of kitchen business. “At Zoli’s, it has been something we are trying to implement for all of the pizza guys,” Jerrier says. His chief culinary officer, Jeff Bekavac, put glove use into place. “When we get into Cane Rosso it will also be stressed. The expo already wears gloves when touching any type of garnish. We don’t have any BOH that uses the computer, but obviously it doesn’t help if they just wear gloves, then hit the computer screen, then touch food with the same gloves.

“It is a large expense for any restaurant, but the perception is worth the cost. Gloves need to be changed often. If they go to do something on a piece of equipment, then back to the line, (gloves)need to be changed. If anything foreign touches their hands, they need to be changed. (Gloves are a) good barrier for any allergies that a customer may have. Not the only defense, but also good for them to see that we care.”

Zozzaro and his partners are always watching “either in person or on the cameras to make sure things are being done right,” he says. “We have also shown a video that we found on the internet about cross contamination and have our new employees watch it. You need to teach all your employees what all my managers and partners learned in the food safety courses we have taken. A little due diligence can go a long way in ensuring proper protocol and safety.”

Simply using gloves will not ensure safety in the kitchen, but with some practices, they can help transmission of disease. Consider this: