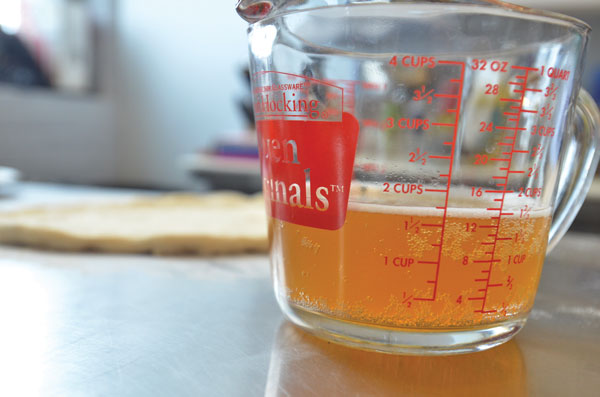 Respecting the Craft: Brewed to Perfection

Respecting the Craft: Brewed to Perfection

Beer Dough — Hopping up your dough adds color and flavor

For years I have experimented with beer in my dough. A pioneer in this style is a long-time friend from Canada, and amazing pizzaiolo, Diana Cline. Sometime around 2006 I met her at a show in Italy, and she was carrying a six-pack of Moosehead beer. I asked her what it was for and she said, “It’s for my dough.” I was able to try it as she competed and, boy, it was amazing. Through the years we competed in Italy together and she always stuck with her Moosehead beer dough for her pizzas.

About three years ago I started really experimenting with beer in my dough because I wanted to add it to my menu. Then I started using it in other ingredients. I came out with a pizza called The Sausage and Stout. The dough at the time had Guinness beer in it, but I also included the same beer in my house-made cased link sausages. On top of this I made a beer reduction and beer salt. The incredible thing about beer is that it can be so versatile, and all of these ingredients can go on your pizza.

I prefer 20- to 25-percent beer in my dough. And I look for a darker beer like an IPA or stout. Beer can give your dough an amazing flavor and change the color. I typically lower my yeast, mostly because the flavor of the beer can conflict with the yeast, making it too strong. Also remember to back off on your hydration because the beer replaces that.

Currently I am working with several local beer companies or small breweries at my restaurant locations. For me it has been much better for sales and has created customer loyalty. For example, Holycraft is a brewery that was at Pizza Expo two years ago. Since they were from San Francisco I decided to work with them for Beer Week in late January 2016, right before Super Bowl. I incorporated their Magnum Opus beer for about two weeks. I called the pizza “The Magnum PI” and it was delicious. I had Magnum PI holding a beer in the marketing posters, table tents and on social media. We had one of our biggest weeks in sales ever during beer week. In fact we attracted hundreds of new customers. What a huge success.

I feel like this type of local collaboration is much better than using a national brand unless that national brand will kick in some marketing dollars, promotions and strategies. Working with a local brewery will get you much stronger customer satisfaction returns.