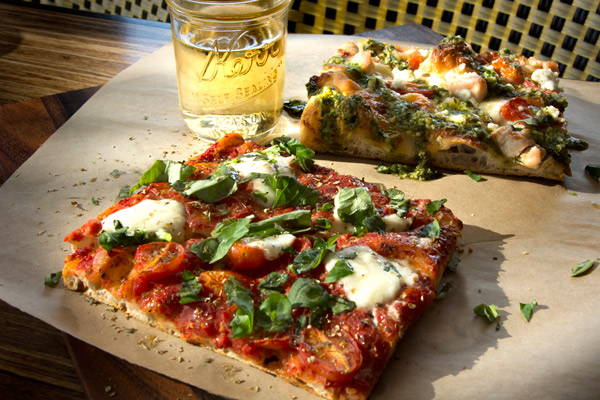 When Pizza Today arrived at Napizza’s flagship location in San Diego’s Little Italy in January, the concept shined through with its quaint outdoor seating wrapped around its corner building, its spot-on vibrant branding inside and out, and its eat-with-your eyes slice and salad displays.

Little Italy was bustling with mid-afternoon foot traffic from the neighborhood, main tourist arteries and area businesses. The pizza competition on the block is fierce, but that never worried owners Giulia Colmignoli and Christopher Antinucci.

With a desire to bring a piece of their native home of Rome, Italy, to San Diego, the couple opened Napizza in June of 2012. They have created a fast-casual pizza concept centered on a menu of gourmet Roman pizza by the square and salads engineered with a healthy focus. The unique quick-serve concept differentiates itself from its neighboring pizzerias in Little Italy. “First, they are all sit-down restaurants. And two, we are surrounded by businesses. So what are they going to be looking for? Fast, healthy food that doesn’t make them tired after they eat it,” Colmignoli says. “It was a win-win.”

The first-time pizzeria owners had faith in their concept and were able to get the corner spot in a high-rent district when the real estate market was down in early 2012. “It was a safe bet,” Colmignoli says.

Today, Napizza has expanded into two other area markets. The second store was opened in the suburban 4S Commons Town Center in 2014. The latest Napizza store opened last summer in the hip and diverse neighborhood of Hillcrest. “For us, the second one was a little more like ‘ok it works in this (Little Italy) scenario, let’s see if it works in a suburb scenario.’ So we were kind of testing as we go.”

Napizza has flourished in all three markets due to the focused brand and concept Colmignoli and Antinucci have built. “We are very easy to talk to, so we wanted to create a brand that was down to earth and creating that type of brand that people could relate to,” Colmignoli says. The couple concentrated on three key areas: the product, the people and the planet.

Napizza’s fresh approach to pizza and salads is on display for customers and passersby to see in a vibrant space. A colorful mix of square pizzas fill the counter display and salad greens are prominently displayed in baskets like you would see at a farmer’s market.

Everything is made in house at each location. Ingredients are sourced from local farms, with no chemicals or preservatives. The flour comes from a small family mill in Italy and the dough is cold-fermented for 72 hours before it is hand-pressed into large, rectangular pans.

Colmignoli and Antinucci also brought in a resident nutritionist to help develop the pizzeria’s menu and work with specific customer requests. The end result is a menu that uses icons to highlight the health benefits of menu items, from supporting strong bones and teeth and healthy fats to supporting heart health and good cholesterol and antioxidant. The icons also showcase gluten-free and vegan options. It’s a smart idea given that San Diego consistently ranks among America’s healthiest cities.

It’s not surprising that salad sales are big, up to 35 percent of food sales. One of the most popular menu items at Napizza is the Superfood Me salad with spring mix, kale, quinoa, walnuts, avocado, green beans, sprouts, apples and a house-made basil lemon dressing ($9.75).

The top-selling pizza is the Truffle Porcini, which is also among the most expensive slices at $5.75. It features porcini mushrooms, truffle Pâté, fresh mozzarella and parsley. La Lasagna ($5.75) is also a popular slice. It has a house-made Bolognese sauce and is topped with fresh mozzarella, parsley and house-made besciamella.

Napizza displays the same dozen pies in each location’s well-lit display cases. They all sell pretty well, Antinucci says. Specials are introduced daily. “We do one daily special and we collect that information on a quarterly basis and we really try to see which daily specials are preferred by our guests,” he says. “For example, the Amatriciana, which was before a daily special, outsold every other daily special by three-folds. So that’s how the Amatriciana became a fixed item.” The Amatriciana features its namesake sauce, bacon, fresh mozzarella, Parmigiano and parsley ($4.75).

Pizzas and salads are accompanied by panini, a soup of the day, desserts and organic sodas.

Colmignoli says: “The most-sold dish is our Happy Belly Combo, which is house salad, a piece of pizza and one of those organic drinks for $11. People love it, and it’s a perfect meal.”

For a fast-casual restaurant, its local beer program is popular and represents 11 percent of Napizza’s sales.

The backbone of its gourmet product quality relies on a strong Napizza team. Its company culture is at the heart of the operation. “I feel like the culture is a very family-oriented culture,” Colmignoli says. “Napizza is kind of a support for them and helping them succeed, achieve their goals and go where they want to go.”

Antinucci adds: “In this industry, we can only pay so much for the hourly employees so you have to give them more than just the paycheck. The one thing that people really like about working for us is that they feel like they have a voice. They know that I have 100-percent faith in them. It goes both ways. They know that I’m there for them. And if I’m not here then they would run this place just as good as I would.”

When Colmignoli and Antinucci developed the concept, they aimed to implement some of the same environmentally-friendly practices that the couple follow at their home. Napizza is the first pizzeria in San Diego to be certified by the Green Restaurant Association, a challenging feat, Colmignoli says.

Others have taken notice of Napizza, looking to take the concept to distant cities, but Colmignoli and Antinucci are not entertaining the idea right now. “We’d like to grow within our integrity,” Colmignoli says. “It’s difficult when you grow a lot to keep that up. We are opening pretty fast but we are also taking a lot of baby steps. I don’t think we have many expectations or plans. We are just going as we go and trying to grow as much as we can so that our employees can grow with us but at the same time we don’t want to grow too fast.”