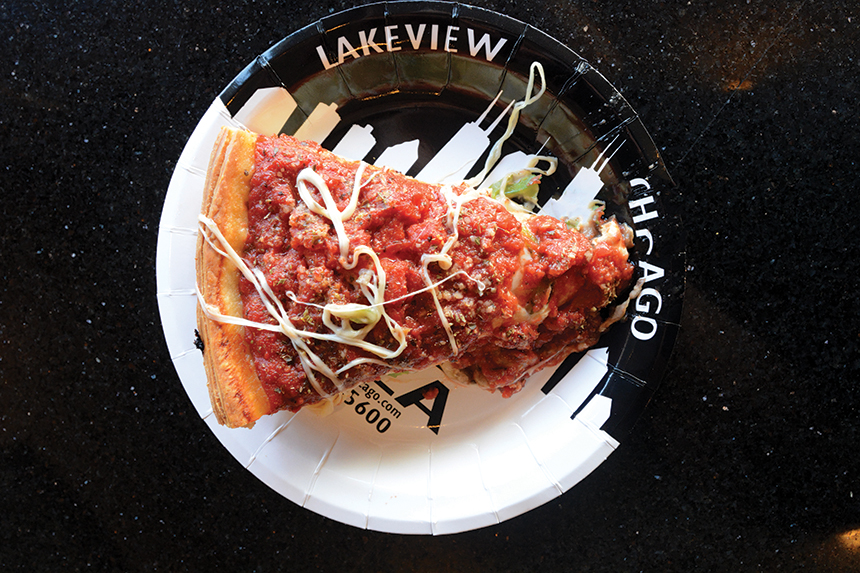 Pizza Today on the Road: The Art of Pizza, Chicago, IL

Pizza Today on the Road: The Art of Pizza, Chicago, IL

Arthur (Art) Shabez has quietly maintained one of the top-rated pizzerias in one of the biggest pizza cities in the U.S., Chicago, for over 30 years. There’s no magic formula or secret to The Art of Pizza in the Lakeview district. He puts in the dedication to the business and remains steadfast to the products he created in the beginning.

A career in pizzeria ownership started before The Art of Pizza. “This is my 41st year in the pizza business,” he says. First venturing into business with a partner, he opened Coluta’s Pizza in 1980. With a successful run under his belt, Shabez was ready to make his mark on the Chicago pizza map.

He started small and found a tiny carryout location in the yet to be revitalized Lakeview neighborhood. He took a chance on a developing area and the decision paid off as the neighborhood has become a sought-after residential and commercial district.

Fast forward to today. Pizza Today visited The Art of Pizza this fall to catch up with Shabez and find out where the pizzeria is today, especially given the current restaurant climate, and hear Shabez’s story.

While touring the building, we walked across the threshold into the counter service area. “(When we opened in) May 1989, this was a four-store mall,” Shabez says of original space before expanding into the entire building. “This was our spot,” he says of his unit. “I haven’t touched this spot. It’s all original.”

Behind the counter are heated display cases featuring stuffed, pan and thin pizzas by the slice. More on the pizza later. As we walked through the swinging doors, we enter a compact kitchen with two massive, double stacked deck ovens with three designated makeline and food prep areas. The output from this condensed space in impressive.

The restaurant doesn’t stop there. In 2008 during one of the largest economic busts, Shabez jumped at the opportunity to buy the building, a savvy business move for a pizzeria in it for the long haul. The space featured four storefronts all the size of the Shabez’s takeout and delivery restaurant and a sought-after parking lot, a prize in Chicago. “I overpaid but it was the best move I ever did.”

Purchasing the building was no easy feat but Shabez was confident in his product and the City of Chicago confirmed it years earlier and continued to validate the quality of the pizza. The Art of Pizza was rated the best deep-dish pizza in Chicago in a 2001 Chicago’s Choice Dining Poll with The Chicago Tribune. The shop went head-to-head against the biggest names in deep dish pizza.

“A lady comes in and she sat down, ‘I got to let you know we’re running a contest and you are Top 3 and we’re going to be announcing the winner for the best deep-dish pizza,’” he remembers. “I said, ‘wow I didn’t know anything.’ She said, ‘how would you feel if you are No. 1?” I said ‘Humbled.’ So, I’m in my basement at 11 pm and I’m on their thing with The Chicago Tribune and here they go. And I just started screaming when I saw No. 1. I got goosebumps. Business went crazy.”

The rating even had other Chicago deep-dish legends lining up to try The Art of Pizza. Shabez says, it was rough for several years trying to keep up with demand, but he leaned on his experienced team, and they continued to produce the consistent pizza.

With word-of-mouth momentum that money can’t buy and an expanded location, Shabez set his sights on a new location. At 3 a.m. he found the perfect spot, a shuttered pizzeria for sale in downtown on State Street with three neighboring colleges and nearby Michigan Avenue. He texted his realtor and was in the pizzeria the next morning. The State Street location opened in 2017.

To this day, he says, buying State Street was one of the best decisions he’s made in business. “Two years later, I sold it to two employees from here (Ashland location) who I took over there,” he says.

This isn’t the first time employees have taken ownership of his pizzeria. An ambitious young employee at the first pizzeria he co-owned eventually bought the owner out.

Shabez shares how to become an owner with his employees. “I show them,” he says. “‘Look what you are making. Look how you work for it. If you put that over here as an owner, you are the owner. So not only are you getting salary from working, you’re also getting the owner’s share.’” Shabez had hoped that at his Ashland Ave. location, he could pass down the reigns. But’s a bit more complex with Lakeview real estate.

The Art of Pizza’s loyal team is dedicated to its success. Shabez shared that some of his employees have been with him for 30 years. “Oscar’s off today 30 years, Jasper’s off today, 30 years,” he says “All these other guys have 16 years, 10 years. Everybody gets a good Christmas bonus, two weeks paid vacation after a year. They get $100 to come in on New Year’s and I give them $50 on their birthday. That’s how I keep them. I have a family at home. I have a family here. You see your family here more than you see your kids.”

Even with a track record for treating employees well, Shabez says that finding employees now is the toughest it’s ever been and he’s not sure how to recruit new employees. “I have an ad in the paper,” he says. “I have an ad on the Tribune website, ‘experienced pizza makers, 40 hours plus 10 hours overtime, $60,000,’ no one. It’s scary. We had 27 employees including drivers two years ago. We are down to 20. We are bare boned now.” But Shabez is committed to maintaining his open hours for The Art of Pizza customers. “My brother once told me, ‘If you give your customers an opportunity to try another pizza place, they just might like it better.’

Costs of goods is another current hurdle Shabez is facing. “No. 2 really is price fluctuation on food,” he says. “I don’t like raising my prices. People know that. I can’t stand it, but I had to.”

Like many operators, Shabez is analyzing what to do on both fronts. Unfortunately, he says, “Hiring and the food costs, I have no answer.”

The labor strain and cost of goods isn’t slowing down business as Shabez says 2021 is shaping up to be a record-breaking sales year. And that’s coming off of the restaurant industry crushing 2020.

But The Art of Pizza performed well during the COVID-19 pandemic. “When COVID hit last year, for four months, it was ‘buy two slices, get one free’ and I didn’t have to do that,” he says. “We were busy. We did very well but I give. And I didn’t advertise. There was a sign inside.” Even with the circumstances and discounting, Shabez says, sales were up three to five percent in 2020.

He believes the delivery and carryout emphasis will continue for some time. The Art of Pizza is 10 percent dine-in, 55 percent carryout, and delivery is the remainder. Carryout includes sales from one third-party delivery service. He used to partner with several others but as he had issues with the drivers or service, he cancelled them.

The menu is 99 percent the same as it was years ago, Shabez says. “We’ve added a few items over the years, but everything is the same,” he adds. “I keep asking my cooks ‘what’s not selling?’ Everything is selling so if it wasn’t, I’d take it off.” The pizza and dough formula? “Nothing’s changed — same sauce, same dough,” he says.

Slices are a much larger percentage than whole pies. Shabez keeps the pizza menu classic with cheese, meaty, spinach and mushrooms, vegetarian, southwestern and Hawaiian options. The Art of Pizza also features a menu of appetizers, salads and sandwiches. It highlights the Chicago staple Italian Beef, as well as chicken Parmesan sandwich and a ribeye steak sandwich. Shabez rotates daily lunch and dinner specials on a large, bright digital sign with high visibility to street and pedestrian traffic.

Currently, those are the only promotions. “Over the years, we did radio, direct mail, commercials,” he says. “I believe the best is door-to-door flyers because they get them right there and they can read them or throw them out. I do have a college kid who does Facebook and Instagram.”

“When I opened, I was doing 10 percent a year in advertising,” he says. “During COVID, I didn’t advertise at all.” Shabez says, sharing that his store’s output is maxed out so advertising now would cause longer wait times, especially with delivery.

Shabez is a hands-on operator, anywhere from two to eight hours a day. When he does get a chance to get away, he says, “I like to go just sit in a restaurant and clear my head. Seriously, I love it.”