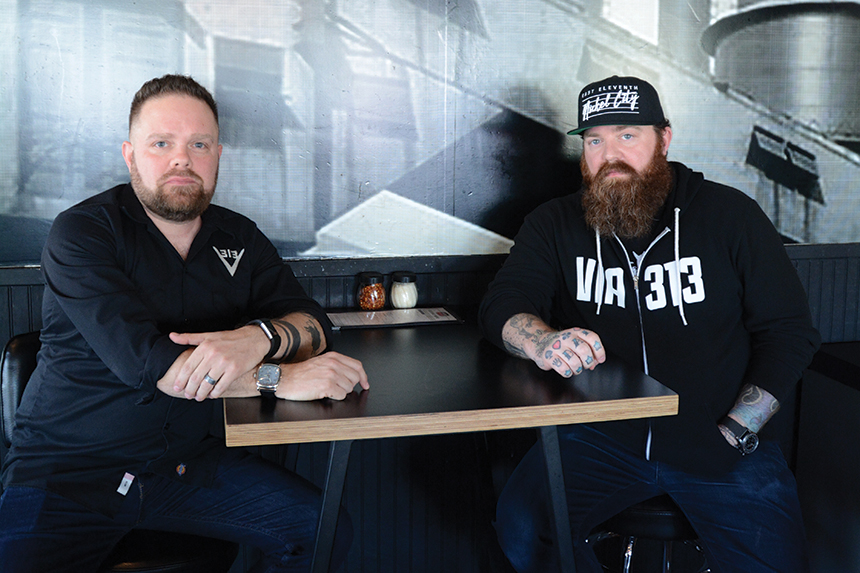 The Hunt brothers grew up on the signature rectangular pie with sauce on top and caramelized edges. Famed Detroit spots like Buddy’s, Loui’s and Niki’s were their stomping grounds. Life for Brandon and Zane in those days were tough. “We’re just two brothers from lower middle-class Detroit, came from very little to nothing, a broken home, a drug house, grew up in that drug scene…,” Zane says of their upbringing.

Overcoming early hardship is something that has gotten lost in the plethora of national media attention the brothers have received. “You don’t see a lot of people climbing rungs on the socioeconomic ladder,” Zane says. “You just don’t see that, and we are a success story about that. It was hard for us early on. We weren’t surrounded by success. We weren’t surrounded by people who had money. We always say ‘We didn’t learn what the right thing to do was. We usually just knew what not to do.’ We don’t always know the right thing to do. We’ve had to learn. For the most part, we are completely self-made. That’s like the old American Dream.”

You wouldn’t know of those modest beginnings when you see the pizza influence they’ve created in the Lone Star State. They’ve built an Austin icon that locals and tourists flock to for a genuine Detroit pizza. Via 313 has three brick-and-mortar locations and two permanently placed trailers, that combine to crush a staggering $12 million in annual sales last year. The pizza company is poised to break into the Top 10 on this year’s Hot 100 Independent Pizzerias list.

Pizza Today caught up with the Hunt brothers at the North Campus location in March to talk shop and see what makes Via 313 tick. The thing you notice when you enter Via 313 is “genuine” etched on a brick wall, perhaps foretelling the forthcoming pizza experience. Black is dominant on the walls, tabletops and black and chrome stools. It’s mixed with some industrial features as subtle tributes to Detroit’s automotive boom.

As the Hunt brothers begin to talk about the business they’ve founded, it’s clear to see that Brandon is the yin to Zane’s yang. The two complement each other in conversation and traits. They lead the pizza company by gravitating towards their own strengths and interests that balance the business perfectly.

Zane came out to Austin first in 2009. His new city was void of what he knew as pizza. It sparked Zane and Brandon to push that entrepreneurial drive they share into the direction of a neighborhood pizzeria. “We had an e-mail chain going on a Word document and I would be trying different dough formulations, different pans, different cheeses,” Zane says. After some experimenting, they had a viable product.

Everyone who tried the pizza told them to go for it and open a restaurant. Zane admits they lacked confidence and capital in the beginning and pursued a food truck instead. Zane and Brandon both had day jobs. But as fortune or fate would have it, Brandon was fired from a local restaurant. “We had the recipes,” Brandon says. “We had the idea. That was the kick in the ass we needed.”

The two pulled the trigger on a downtown trailer, Via 313. The mobile unit needed to generate at least $200 a day to be able to pay Brandon a modest salary. “We did $218,” Brandon says of its first-day sales. “It felt like every day we’d do $220, then $240 then $280, everyday it kept going up. The business plan was just to have the two us for the first year and about four months in we had to hire our first employee. We were doing $1,000 a day.”

Within the first year, the brothers also opened a second downtown trailer. They reached out to Big Dave Ostrander and Tony Gemignani for guidance on the leap to a restaurant. “These are titans to us and these guys are telling us, “You gotta do this. Go ahead. Hurry up,’” Zane says.

Brandon and Zane made their first brick-and-mortar location a reality two and half years after opening the original trailer, but not in the area of the city most were thinking. Instead of tourist-hopping downtown, they opted for the southwest suburban district of Oak Hill. “We saw it as it made perfect sense because it gets us back to our original goal, anyway, which is to be a neighborhood pizza place,” Zane says.

A North Campus location followed in 2016 and a restaurant in East Austin in 2018. The trailers still focuses on pizza, while the restaurants offer a full menu and bar.

The menu is straight forward. Detroit-style pizza, bar-style pies and a few apps, salads and desserts. Zane says the menu used to be a lot larger, but some items’ sales figures just weren’t worth the prep. “Everything has been streamlined. Tiramisu’s gone, cheese plate’s gone,” Brandon says. “It’s like ice cream, pizza, salads, go.”

The Detroit-style pizza, Zane says, isn’t an exact replica of their childhood pie — but it’s close. While sourcing regional cheeses has gotten easier, you couldn’t find brick cheese outside of Detroit when the brothers opened, so they went with a white cheddar.

On the Detroit-style menu, The Detroiter has smoked pepperoni under the cheese and natural casing pepperoni on top. The menu even pays tribute to Gemignani with The Cadillac topped with gorgonzola, fig preserves, Prosciutto di Parma, Parmesan and a balsamic glaze.

Doing such a unique pizza almost 1,400 miles from where it’s commonplace, they knew they wanted to offer another style. They toyed with the idea of going Neapolitan but too many Neapolitan spots were popping up locally. A trip to New York (well, a side trip to New Jersey) sealed the deal when Zane and Brandon tried a bar pie at Star Tavern. “We had one of the better pizza experiences of our lives over there,” Zane says. “We devoured that pizza in like two minutes. Let’s just do this? There’s not really anybody doing this.”  Today, bar pies make up roughly 15 percent of pizza sales.

Though minor tweaks have been made, the pizza is basically the same as when they started. As Via 313 has solidified its foot hold in the Austin market, Brandon says, they’ve built a leadership team to focus on day-day-operations. “We have so many layers now where we have operations people, team and tech director…,” Brandon says, adding that the challenges faced today are eased with the leadership team.

It also has freed up the brothers to target those aspects to help the business flourish and the often-overlooked things that can drag a restaurant down. They’ve added employee programs to recruit and retain their eclectic team with a 40-hour max work week and incentives like insurance, cell phone plans and paid vacations.

“Our meetings are spent talking about people, not pizza,” Brandon says. “Our days are spent ‘how can we build everyday customers?’ That’s a testament to the brand now. We have raving fans. We haven’t spent any money on advertising. It’s all been trying to provide a five-star atmosphere, whether that be the first-timer welcome, dumdums when you’re done, having a server that might be intimidating looking but ends up being the most pleasant person that you’ve met. The focus is customer service. It’s about taking care of people. ‘The answer is ‘yes. What is the question?’ We’ve kind of modeled it after that a little bit. Nobody should be saying no to anything.”

The Hunt brothers have their sights on more growth, even outside of the city. “I think that if we very carefully choose the right locations, it would be great to be one more spot in north Austin, something that doesn’t cannibalize what we have going here at campus or east side,” Zane says, “and then the north part of San Antonio.”

Brandon adds, “We’re staffing up our upper management to comfortably do that.”

Amidst all of Via 313’s success, there is a lasting impression that resonates of just how humble Zane and Brandon are. “Part of it is who we are and where we come from,” Zane says. “We learned a certain way of doing things. For the most part it’s put your head down and move forward. You don’t dwell too much on what you just did. You don’t celebrate too much. We’re not too good at those things. I think a lot of time people will try to compliment us and we’ll divert the conversation. Anniversary parties come up and we’re like, ‘It’s just another day; we have to keep moving forward.’ It’s great that we’ve made it this far, but let’s keep going.”