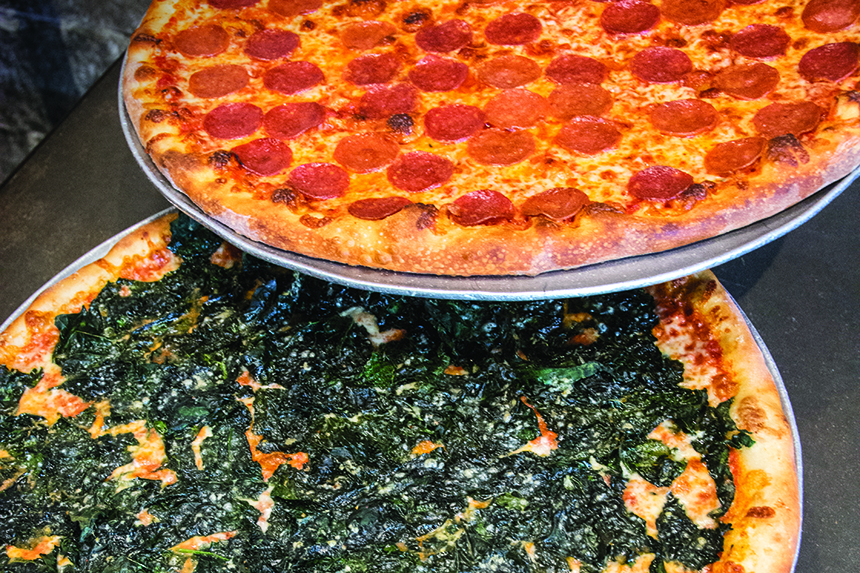 When you take less than $1,000 and turn it into a food city’s most buzzed-about pizzeria, clearly you’ve hit on something big. However unlikely it seems in an industry rife with failures, Michael Friedman and Greg Augarten managed to do just that with Pizza Delicious in New Orleans. The unexpected ride the duo has been on for half a decade now has taken them from a once-a-week, back-alley popup shop to a pizzeria that has garnered some serious national praise.

And it all started with a craving for a good slice.

“For us, when we went to college, the pizza here just wasn’t our scene,” Friedman explains. “We grew up on thin crust and ate pizza two to three times per week. When we got to Tulane, we were looking around for all the good pizza, and we couldn’t find anything like what we’d always had.”

Both Friedman and Augarten are native New Yorkers. The former grew up on Long Island, the latter in Queens. They longed for the massive, foldable slices to which they were accustomed. After meeting at Tulane and forming a friendship, it didn’t take them long to start reminiscing about New York pizza. And, soon, that longing for eating the product turned into a resolve to make the product.

But they didn’t set out to feed the masses … just themselves and a few friends.

“I don’t know if there was any one moment when we decided, ‘We should go into the pizza business.’ It was more that there were a series of opportunities that presented themselves,” says Augarten.

New Orleans’ Bywater neighborhood is an interesting area that is part of the Ninth Ward. It sits directly on the Mississippi River and is home to a small residential community as well as a mix of businesses. It was in this historic district that Friedman and Augarten launched their pop-up shop, which they dubbed Pizza Delicious.

“We started out as a small pop-up one night a week,” Augarten says. “The space we started in had a big dough mixer and an old pizza oven, so we were pretty lucky because we got started making pizzas for probably under $1,000 total at the beginning.”

Says Friedman of the funky setup: “It was an old bakery space that never really came back after Katrina. It was on a residential street, so the guy next door bought it. It was never a store front. This guy owned it, but he wasn’t really an entrepreneur. We literally started paying him rent in pizza. It was the most relaxed environment possible. Which is what added to its appeal. It’s literally an alleyway in a residential area and we put out a table and were tossing pies.”

That was in February 2010. The first night, says Friedman, Pizza Delicious sold 30 pies. But word eventually got out about this makeshift alleyway pizza joint that was serving really good food. Before long, says Augarten, “it just snowballed. We developed a following.”

Eating pizza is one thing. Making it is another animal entirely. Where’d these two New York kids who attended Tulane learn how to make it?

“We’re self taught,” Augarten says. “We just messed around and researched methods and recipes on the Internet.”

The hardest part? The dough, of course.

“We didn’t experiment that much with dough before we got to the commercial kitchen,” Augarten says. “But to really understand how the dough will react, we had to work with big batches. That was the biggest learning curve for us. We aren’t bakers. But we knew if we could figure the dough out that everything else would seem easier. We were in there four to six weeks before we started selling pizza.”

After a year, Pizza Delicious began operating out of the space on Thursday nights as well in order to satisfy demand. Customers routinely asked when “the real pizzeria” would open so that they wouldn’t have to wait so long to get their fix.

“But two nights a week was the most we could use the space because there were other people in there,” Friedman says.

Near the end of the pop-up run, Pizza Delicious was selling 120 pizzas every time it opened.

“It was exciting,” recalls Friedman. “It eventually got to where you had to call really early in the night to reserve your pizza in advance, because we only had so much dough. Once it was gone, it was gone. We were getting phone calls at 10 a.m., and we didn’t open until 5. People would call at 10 and go, ‘Are you sold out yet?’ We eventually hired a friend to take phone calls throughout the day and pencil in the pizza reservations. By the time we opened at 5 p.m., if you wanted to get a pizza the wait was three to four hours long. That’s when we realized we needed to open a restaurant.”

They made the jump from pizza eaters to pizza makers. Why couldn’t they make the leap from pop-up stars to brick-and-mortar, full-time restaurateurs?

“That was never the idea,” cautions Friedman. “This came out of a lot of repetitive conversations that Greg and I would have towards the end of school. I can’t believe no one had done it yet. I couldn’t believe that this city had such great, amazing food everywhere, but the pizza sucked. We knew if anyone ever figured it out that they’d do well. Not that we had it all figured out — we aren’t business guys.

Staying in Bywater, where the groundswell began, just made sense when it came time to search out a storefront.

“There were a lot of people living here in this area, but there weren’t a lot of restaurants,” says Friedman. “It was a good fit. We’d gotten to know the neighborhood.”

Though many restaurant start-ups find it nearly impossible to obtain financing through traditional lending systems, Pizza Delicious had history on its side –– and a slew of write-ups in esteemed food publications. As a result, it was able to get a commercial loan from a local credit union.

“Having a sales history for almost two years and having press really helped. We were able to show that,” says Friedman. “Projections are a total guess anyway. But one of the great things about New Orleans is that we kind of like each other in the restaurant industry here. There’s a good community of support and people are willing to help one another out and want them to succeed. So we could talk to restaurant owners and friends in the industry.”

Adds Augarten: “We didn’t know what we were doing, exactly, but we had a rough idea of the numbers we could do. Even though it was only two days a week that we were open, we had sales records. They weren’t in a POS, but we had records. We could chart how many we did on those nights.”

The two even started a Kickstarter campaign to pay for their pizza oven.

“It’s a lot of work,” Augarten says of the campaign. “We were lucky enough to do well, and it was rewarding. It was cool to see people you don’t necessarily know supporting you.”

While large pizzas and slices were obviously destined for the menu from the very start, Pizza Delicious has earned lots of attention for its other menu items. The plan from the start was to keep the menu small, focused and, above all, fresh. Pizza Delicious offers house-made pastas, soups/salads, desserts and garlic knots. The menu offerings change frequently –– daily, even, in some cases.

“We make some pretty cool salads and house-made pastas,” Friedman says. “We keep our menu tight and concise and rotate through it a lot. It keeps people excited and keeps us excited, too.

“Our pizza specials rotate weekly through about 20 different pies. We always have a cheese, a pepperoni, a Margherita and a vegan pizza. And then we have a special with meat and a veggie special of some sort. We don’t like over-complicating things.”

Augarten says the regularly rotating specialty pizzas are pretty much comprised of the recipes they developed during the pop-up days. But the Pizza Delicious kitchen staff often jumps in with new creations that enjoy a short run in the limelight before the next new item comes along.

“With the pastas and salads, they change out a lot, too,” he says. “We have a salad special that we keep on two to four weeks, depending on how it’s selling.”

The pasta is made in-house, which Augarten says encourages creativity and constant change.

Desserts are made in-house and change frequently as well.

“It’s just more exciting for the customer,” Augarten says. “We’re always pushing out new things instead of constantly busting out the same menu.”

As Friedman says to accurately sum Pizza Delicious all up: “We’ve sort of come into our own here. We’re a real restaurant now!”

Jeremy white is editor in chief at Pizza Today.