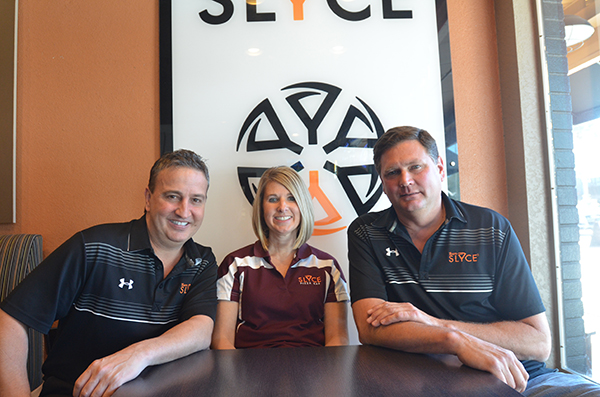 With an expansive bar both inside and outside the pizzeria, Slyce Pizza Bar in Indian Rocks Beach, Florida, has become a destination for beachgoers and locals alike. The shop offers build-your-own pizzas as well as a lineup of specialty pies, sandwiches, salads and appetizers.  And both of the aforementioned bars offer full liquor and feature a wide array of craft beers and wine.

“We have quite a wine selection,” says Co-owner Jack Bennett. “We offer around 55 different bottles of wine, and most of our wines are available by the glass. We’re sort of known for our wine selection. And Ken is a huge craft beer guy, so we’ve really gotten into that as well.”

Don’t let the emphasis on beverage service fool you into thinking the food doesn’t matter to Bennett and Co-owner Ken Gillespie, however.

“Our kitchen does an amazing job,” says Bennett. “We do a lot of volume out of this kitchen, and it’s a really small space. There are times where our kitchen literally can’t produce any more food. All the orders are lined up and the kitchen is just backed up and maxed out. ”

Adds Gillespie: “Our carryout and delivery area only has two phones, and it really should have four now. There are nights where people call and call and can’t get through.”

The simple fact is that Slyce needs more space. The owners quickly discovered that after opening in 2011. Suffice to say, it didn’t take long for volume to pick up.

“We’ve expanded once already, but we’ve run out of space again,” says Bennett. “We wanted to take over the space next door, but a candy store had beaten us to it.”

Adds Gillespie: “The first year-and-a-half we were really trying to figure out how to take on more space. Opening the patio was the game changer. That’s when it really blew up.”

“We had hoped for it to be part of the business from the beginning, but it wasn’t all-weather seating out there at first,” says Gillespie. “Now it’s really what we wanted it to be all along. It stays busy.”

With the volume high — Slyce does nearly $3 million in sales — the pressure to serve a good product is never far from the owners’ minds. Bennett asserts it all starts with the dough at his concept.

“We used to make a little bit of dough every day. But now we make 300 to 400 dough balls and they’re usually aged,” he says. “We go through a racking system where they are dated for that day. So we don’t make dough for that day anymore. Aging gives it a little more time to let the dough do its thing and grow. It makes our crust a lot different. It gives it a lot better texture and more firmness. People are crazy about the dough, and we all judge pizza on dough.”

The dough is aged three to four days, depending on how brisk business happens to be at the time. Common (think black olives or jalapenos) and premium (like hot soppressata and truffle mushroom mix) ingredients are used to top the dough.

The company’s signature dish is the “Sitton Supreme.” It features Applewood bacon, pepperoni, Andouille sausage, mushrooms, fresh spinach, red onion, fontina and fresh mozzarella cheese. It’s priced at $23.99. The pizza is named after Matthew Sitton, a resident of Largo, Florida, and an Army Ranger who was killed while serving in Afghanistan on August 2, 2012. Sitton left behind a wife, Sarah, and a nine-month-old son, Brodey.

As proud supporters of America’s military families, Bennett and Gillespie wanted to do something meaningful for the Sitton family through Slyce. They settled on supporting the Brodey Sitton Fund. Every time a Sitton Supreme pizza is sold, Slyce donates $2 of the sale’s proceeds to the fund. Gillespie and Bennett say they will continue doing so all the way up to Brodey’s 18th birthday. They anticipate their support helping cover the young man’s cost of attending college one day.

Considering the warm reception Slyce received right out of the gate, along with the space restrictions, it’s no wonder the owners are looking to grow. A second store is scheduled to open any day now and a third unit is already in the works.

Additionally, a mobile unit has helped the brand introduce itself to customers in nearby markets.

“We use the mobile unit all the time,” says Bennett. “It’s out there at least once every two weeks. Up and down the beaches, there are a tremendous amount of events. There are blues festivals, jazz festivals, you name it. We take it out to charity events and local school events. It goes out 30 to 40 times a year.”

Gillespie says that billboards are illegal in Indian Rocks Beach, but the wrapped mobile unit serves as great advertising.

“That’s another big benefit to it,” he adds. “It’s great marketing.”

The unit is equipped with an oven, refrigeration and hot water. Gillespie says Slyce has spent “a major amount of time” ensuring the product served out of the mobile unit closely mirrors what customers get in the store.

“The major difference,” says Bennett, “is that we just can’t produce a lot of pizza very quickly with it. So there’s a lot of planning that has to go into it.”

The aforementioned second store is scheduled to open in Madeira Beach next month.

Bennett says he hopes it will become a magnet for families. It will feature a large deck and a fenced-in grassy area where kids can play while their parents enjoy a drink.

The third store, which will be located in St. Pete Beach, should open roughly 18 months after the Madeira location.

“That’s been the plan all along,” says Bennett. “We needed to relieve the pressure off this place. It’s so busy that there are people who literally won’t come here because of the wait. By giving them other nearby options we can accommodate more people.”