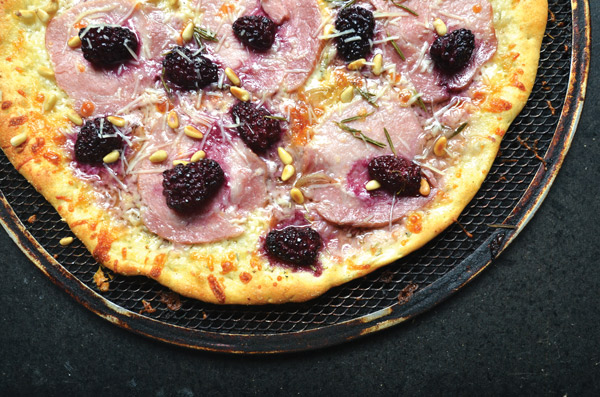 There are times as an entrepreneur that you want to take the low-risk road when it comes to toppings. That voice in your head says, “Will my customers even know that this topping is a cheaper (and perhaps an inferior) product?” looms every time you see a food invoice showing the savings you’ve made. I’ve bounced back and forth on this topic for years and have come to realize that the one question an independent operator should always ask him or herself is: “What makes me different from those corporate nugs down the street?” The answer is right down in front of you: quality, freshness, competence and pivot. Canadian bacon can be one of these perfect, high-end toppings that will make you stand out from the crowd. With very little prep, you’ll be able to pivot and present an ultimate high-end topping without getting soaked.

These round slices are a far cry from what this “bacon” started out as — originally called “back bacon”, “side bacon”, Wiltshire cured bacon or Welsh air-dried loin of pork. This is the loin of the pig which is the leanest and hence driest cut of pork which is why, back in the day, the Canadians and British kept the piece of fat on the loin which melts away and leave a crispy bacon type remnant.

Canadian bacon comes to us between five and seven cents a slice. This is a far cry from what customers pay in grocery stores. They continually get soaked for $3.99 for just 12 slices –– that’s almost 33 cents a slice! Why not take advantage of this product that customers think of as “high end?”

Canadian bacon sliced thinly is really great on a large pizza with eight, nine, or 10 slices. That’s just 70 cents a pizza which is the same as premium pepperoni where I come from.

Over the years, Canadian bacon has morphed into big business with water added and sketchy lower-end cuts added with meat glue to make the logs of today. This means that you, as a pizzeria professional, should keep vigilant even for upper-end toppings and how they are made. It is always the way it is processed that counts. Also, thin sliced Canadian bacon gets a better “spread” on a pizza but tends to dry up more than the thick slices. The thin slices will heat up perfectly when put on directly after the pizza comes out of the oven for a nice melting meat cloak like speck, prosciutto di Parma and serrano ham. Thick slices are hard to cut through when prepping a pie for the customer and are even hard to bite through.

Canadian bacon pairs well with all of the foods that ham and bacon pair with. But remember, this product can come out drier than all that liquid-infused meat product you may be used to putting on your pies, especially if you are using a conveyor oven.

Whenever I visit Rome, I cannot wait to eat the famous, “Pasta al Forno” (which means “baked pasta”, and is made with a variety of pastas and is traditionally served at lunch on Sunday). Called “timballo,” “timpani” or “pasticcio,” it is so good that I wanted to mimic this delicious flavor combo using Canadian bacon in a pizza. (If you cannot find fresh peas, just use frozen organic peas.)

I have fond memories of my mom taking me to a crepe place in my youth. She went gaga for the Quiche Lorraine, which finds its strength of flavor in the strong taste of gruyere, cream and bacon. This seems daunting but if you are careful baking this pie (at this low heat of 500 F), it is a real winner, perfect for a Sunday brunch slice counter.

This was my pizza that won at the European Union Trophy last year in Brussels, Belgium. It has a fantastic “agra dolce” combination of sweet maple and sour cheeses with the Canadian bacon leading the way and a great sweet rosemary finished with pine nuts.