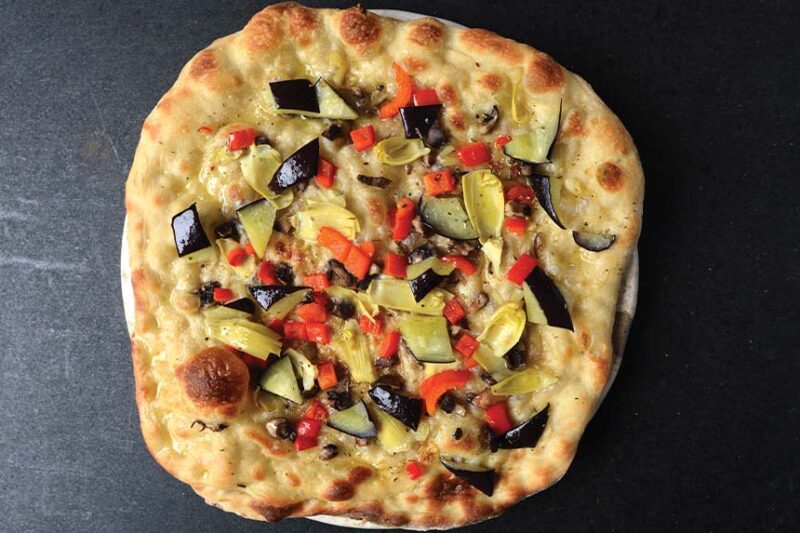 Versatile eggplant has a spot on pizzeria menus

Versatile eggplant has a spot on pizzeria menus

There is more to the versatile eggplant than its most familiar restaurant menu item, Eggplant Parmesan. This meaty ingredient has a place across your menu.

Its bounty is often found next to squash and zucchini in stores. But, technically classified in the berry family, it is easy to mistake this fruit for a vegetable. Eggplant comes in a variety of shapes, sizes and colors. The Globe is the most common eggplant variety,  known for its deep purple color. The Italian eggplant is a bit smaller than Globes and tend to be sweeter. Graffiti eggplants are also popular for their purple and white striping. Depending on your distributor or direct farm source, you may be able to tap into other varieties, like Japanese, Rosa Bianco and even Thai.

No matter which variety you choose, there are multiple ways to prepare eggplant, from pan seared, grilled and roasted to steamed and pickled. While you can eat eggplant raw, it is best cooked. And if it’s undercooked, eggplant can taste bitter.

A couple of notes to be aware of when preparing eggplant: When cutting, eggplant tends to brown quickly so be sure you are immersing them in water or hit the pieces with lemon juice. Eggplant has a very moist and spongy texture. Pat dry and salt before cooking.

There is nothing wrong with going with traditional eggplant dishes. Here are a few that you can add easily:

These recipes are all available at PizzaToday.com/recipes.

Don’t limit yourself to the eggplant standbys. Let’s look at a few menu ideas that could become hits at your restaurant:

Eggplant Caponata. Think Sicilian bruschetta. It’s a sweet and sour mix of eggplant, tomatoes, celery, onion, olives, garlic, vinegar and capers. It’s not too far from a ratatouille. Depending on your crostini application, this can also be a good vegan option.

Baba Ganoush. This eggplant dip rivals hummus and is bursting with flavor. It’s typically served cold with crostini. You’ll also find it served with blanched or pickled veggies, a nice twist to a classic Mediterranean starter. See the Baba Ganoush recipe below.

Pasta alla Norma. It’s another traditional Sicilian dish that is simple and makes eggplant shine. It features your house marinara, roasted eggplant, basil, red pepper flakes and ricotta salata or Parmesan with your choice of pasta.

Eggplant can easily be adapted into other menu ideas such as salads and soups, as well. Now, let’s talk pizza application. Remember: with such a high water content, it’s vital to cook out much of the water before using as a topping. Eggplant can easily be roasted in your pizza oven during prep and held on your make line. But don’t over oil the eggplant or it will turn into a soggy mess.

Eggplant Parmigiana is one of the most common versions of pizza. There are so many other ways to incorporate eggplant on your pizza toppings list. Here are some combination ideas to test in your kitchen:

Now, here are some recipes to try and adapt for your customers

Get the Plant-a-bello Pizza recipe.

Get the Baba Ganoush recipe.